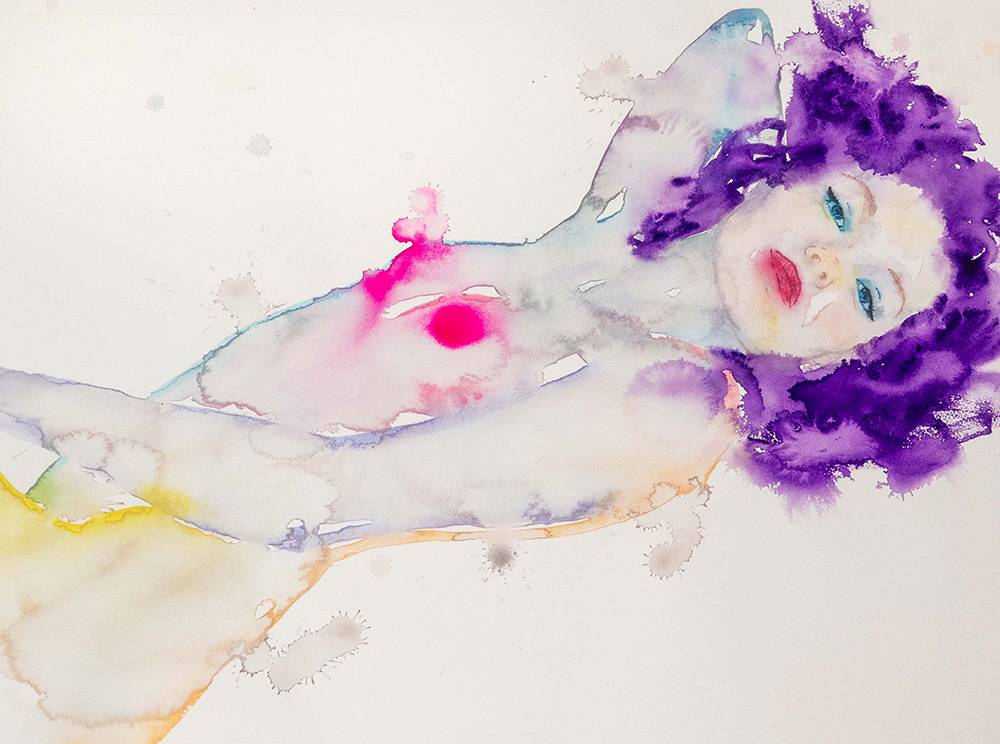 The Untitled Space is pleased to present “WET DREAMS” a solo exhibition of watercolor paintings by artist Fahren Feingold on view from October 21st through November 13th, 2021. “WET DREAMS,” curated by Indira Cesarine. premieres the latest series of works on paper and panel by the artist known for her ethereal feminine nudes that emphasize the female gaze through vibrant brush strokes using her signature wet-on-wet watercolor technique. The exhibition will be the third in person solo exhibition of artwork by Feingold presented by The Untitled Space. The artist, who has been represented by the gallery since 2017, has been featured in a number of group exhibitions and online solo shows presented by the gallery, and is featured in numerous notable international collections.

In WET DREAMS, my practice has evolved. Instead of taking inspiration from vintage imagery, I am working from my own photographs as visual references. Many of the models are personal friends, giving me an insider point of view to their real lives and presence rather than creating imaginary narratives about who the women are and the past lives they may have led. By taking time to really look at and get to know the women, their stories, and their bodies, my paintings are like a love letter to my subjects, shared with the world so they can see what I feel. I don't literally paint my models but the emotions they radiate.

Using watercolors to paint my bright and bold figures gives me access to those who usually shy away from nudity. In my work, I uncover women's pre-sexualized bodies to explore the beauty and intuitive emotions of my feminist gaze.

For this exhibition, I worked on growing in scale, with several pieces on multiple panels. As a physically petite person, I struggle with feeling seen and heard. Through the act of painting, I let my work speak loudly for me. Thus, expanding the watercolors from the confines of single paper dimensions, my voice becomes that much harder to ignore. WET DREAMS is a demand for people to listen and see women as equals, while sharing the visual poetry of their unique intimate stories.” – Artist Fahren Feingold

Watercolor artist Fahren Feingold imparts an ethereal quality to her unique works depicting the female form. Her watercolors featuring bold feminine nudes reference her own photographs as well as imagery from early 20th century French erotica, and vintage American magazines from the 70s and 80s. The Los Angeles native moved to New York at the age of seventeen to study at the Parsons School of Design. After earning her BFA between Parsons and Glasgow School of Art, she worked as a fashion designer for top brands including Ralph Lauren, Nicole Miller, and J.Crew, among others. In 2016, her dreamy watercolors caught the eye of the legendary Nick Knight, who commissioned her to illustrate Paris Fashion Week for SHOWStudio. Her work has been featured in numerous international exhibitions including “Moving Kate,” curated by Nick Knight for SHOWStudio in London and The Mass in Tokyo; “The Vulgar” at The Barbican in London, curated by Judith Clark and Adam Phillips; “Red Hot Wicked” at Studio C Gallery in Los Angeles; as well as a number of exhibitions at The Untitled Space, including her debut solo show in 2017.

Her work was featured at The Untitled Space in her 2017 solo show FAHREN FEINGOLD, as well as a solo show presented in collaboration with brand Fleur du Mal in 2018 titled, PEEP SHOW. She has additionally been featured in the gallery’s group shows, INNOVATE, UNTITLED, BODY BEAUTIFUL, IRL Investigating Reality, ONE YEAR OF RESISTANCE, SECRET GARDEN, UPRISE / ANGRY WOMEN, The Female Gaze on Love, Lust & Longing, and LIFEFORCE, as well as at SCOPE MIAMI and AQUA MIAMI Art Fairs in 2018.  Her work was featured at SPRING/BREAK Art Show “(Hotel) XX” (2018) and “EDEN” (2019) Special Projects presented by The Untitled Space, at Sotheby’s New York “Take Home A Nude” benefit exhibit and auction, as well as Art4Equality x SaveArtSpace’s 2020 public art billboard exhibition.

ABOUT THE UNTITLED SPACE https://untitled-space.com