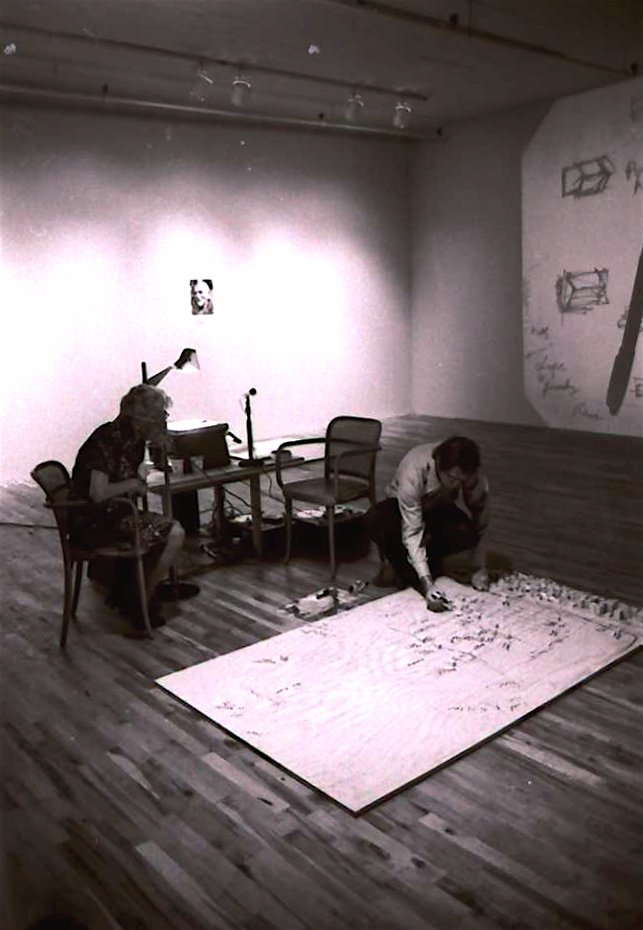 On view is an installation of 1970s wall fragment paintings by Will Insley which are created with more concern for form than color. Instead of utilizing canvas, Insley constructed his paintings with architectural materials to further accentuate their fragmentary subdivision from the grid. The paintings are exhibited together with an additional wall fragment painting from the 1990s representing mathematically ‘slipped space’ throughout Insley’s lifelong art project of ONECITY.

Nobuho Nagasawa’s woven, optical fiber works highlight time, process, and community participation in her transfiguration of natural elements to dynamic installations. For this exhibition, photography from six recent installations will be shown with Umihotaru (Sea Firefly) (2013) from her installation, Umi no Utsuwa (Voyage through the Void) (2013), first presented at the Setouchi Triennial in Shodoshima, Japan. The sea firefly is symbolic of protecting the natural environment in Japan; Umitoharu was the precursor to Umi no Utsuwa which holds dual meaning in Japanese as both a vessel (container) of the sea and a vessel (womb) of birth/life.

Three painted constructions by Alan Steele from three separate periods of his artistic career will also be on view. Following in the footsteps of minimalism, conceptualism, and the shaped painting movement, Steele formulates precise fragments suggesting the abstraction of a greater structure. The imagination of the whole is simultaneous with its ruin and removal.

The artworks by Roger Welch are part of his ‘Memory Map’ performances where he pioneered the application of conceptual thought to the Narrative Art movement at the John Gibson Gallery. For this exhibition, Welch will bring back his 16-foot diptych, Ruth Elliot Memory Map (1973), created on the first of four occasions of his ‘Memory Map’ performances. The diptych will be available for acquisition for the first time since being deaccessioned from the collection of art dealer Holly Solomon. The work will be exhibited alongside video documentation of Welch’s 1973 performance.

Will Insley (1929-2011) was an American, abstract and conceptual artist born in Indiana, graduate of Harvard Graduate School of Architecture, and thereafter lived and worked in New York City. Insley challenged the accepted formal limits of art in the creation of his 50-year-long art project, ONECITY, focusing on diagrammatic paintings, drawings, photomontages, and sculpture.

Nobuho Nagasawa is a Japanese artist, raised in Europe and Japan, and living and working in New York City. Using time, process, and community participation, she creates dynamic installations highlighting the intersection of art, science, technology, sound, and synesthesia.

Alan Steele is an American geometric, abstract artist, raised in Venezuela and Brazil, and living and working in New York City. His work focuses on fragmentary objects immersed in understandings of tradition, culture, and geography to ascertain parts of a whole.

Roger Welch is an American, conceptual artist, living and working in New York City. Welch, along with John Baldessari, William Wegman, and Bill Beckley, is one of the pioneers of the Narrative Art movement. His work explores time, space, and memory in multi-media installation and video art.