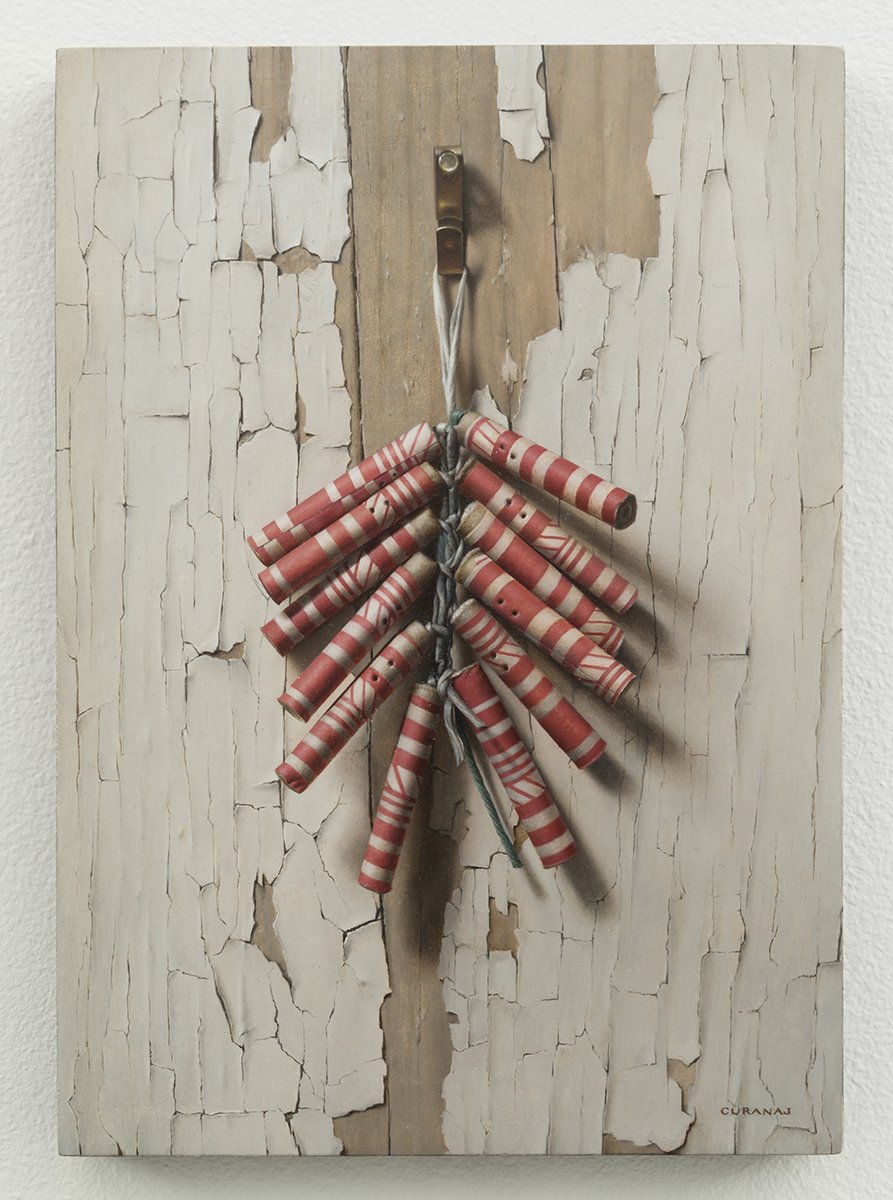 Joshua Liner Gallery presents Echoes and Endeavors, a solo exhibition of new oil paintings and works on paper by contemporary New York artist Tony Curanaj. This will be Curanaj’s first solo exhibition with the gallery and in New York City, and will include 18 new works in the assiduous and patient style of classical realism. The artist will be in attendance for an opening reception on Thursday, November 19, 2015.

Curanaj’s complex, illustrative work is influenced by representational contemporary realism, and the illusionary technique of Trompe L’oeil. Literally translating to “deceive the eye,” the artist’s painstaking dedication to creating his oil paintings result in a striking hyper realistic aesthetic. Curanaj draws inspiration from traditional still life and portraiture paired with the artist’s personal experiences, and appreciation and respect for nature. Some of the paintings are a visual play on words based on these personal experiences. In The Gumball Incident, the artist explores the energetic and sometimes randomness of life, metaphorically represented by a myriad of colored gumballs. The artist explains, “I wanted to have a feeling of potential energy among the calm colorfulness of the image… the various colors of the gumballs represent all that life has to offer with a few of them on the edge of change.” Other works such as Jumping Jack Flash and Big News display firecracker motifs, symbolizing the candor and exuberance of youth.

Other naturalistic symbolism present in the artist’s work are finches and bees, which stand as signifiers for the artist’s personal values. Curanaj explains, “finches represent an individual’s activeness, freedom, health, insecurities and vulnerability…bees are pollinators so they represent family, life and reproduction… I wouldn’t argue with one calling them a self portrait.” Aside from the personal significance of the insects and birds, the artist notes their importance as a reminder of the fragility of nature and the necessity for humanity’s interaction with the natural world.

Aside from the various symbolic references in the paintings, other works adopt a more simple approach. In Kind of Blue, Curanaj’s primary focus is on the study of the intensity of the color blue. An intricate set of ceramic pots, jars, bottles, building blocks, books, a spinning top, teacup, firecrackers, and tube of paint lay before a cerulean backdrop. Despite the unconventional grouping of objects, each item in the still life explores a varying degree in tone, saturation, and texture. The artist likens this interpretation of color as his own “blue period” and elaborates, “I used a small slice of nature’s color spectrum and careful pictorial composition with objects to showcase the exquisite beauty of blues.”

Curanaj’s process from preparation to completion of each painting is laborious and time-consuming. Some of the paintings in the exhibition are paired with studies and sketches to reveal an insightful display of the artist’s complex approach to his practice. Each painting begins with a series of sketches followed by color and value studies in order for the artist to better understand particular elements of the compositions. Curanaj does not reference from photography, but instead takes a traditional approach and draws and paints entirely from life. The still lifes are created from elaborate sets built in the artist’s studio, and figurative work is completed with life models. It is through the artist’s tireless devotion to the subject that results in these complex and empathetic interpretations of his surroundings.