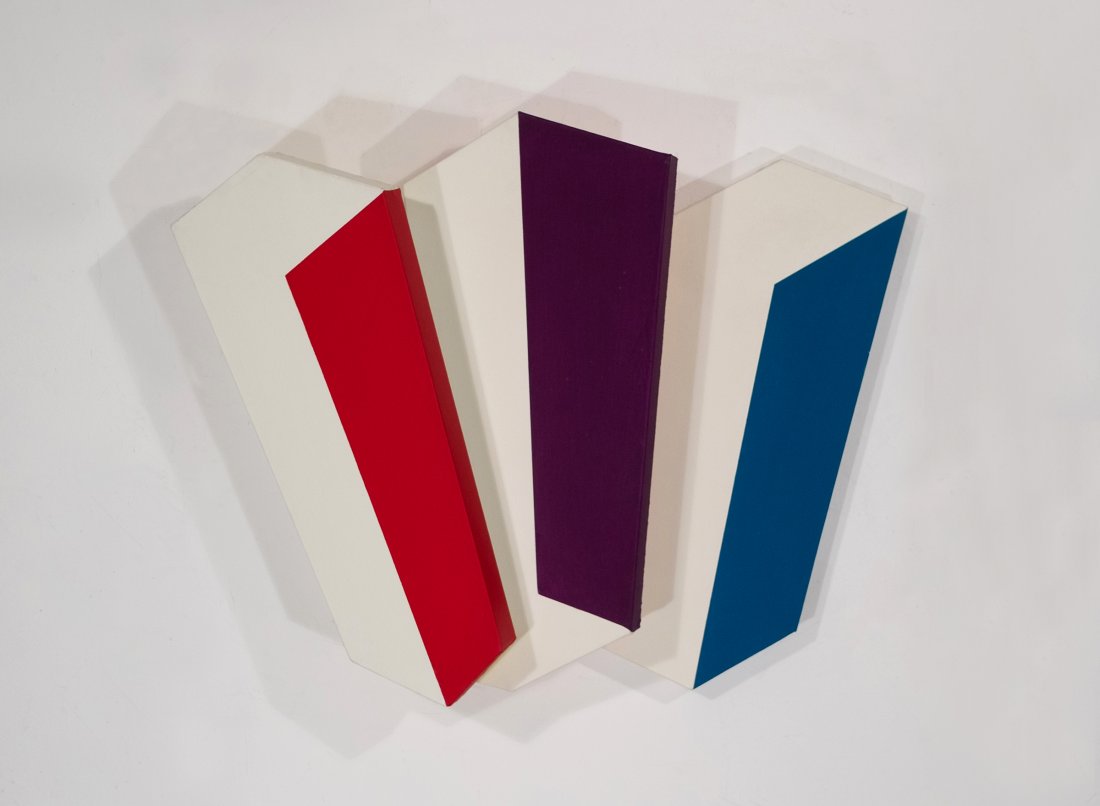 WESTWOOD GALLERY NYC is pleased to present Charles Hinman: Chromatic Eclipse a solo exhibition of paintings by New York artist Charles Hinman (b. 1932). The exhibition takes its name from a painting within Hinman’s 2010 Eclipse series and reflects works from his oeuvre that conceals color behind canvases of white and black. Charles Hinman: Chromatic Eclipse will be on view from July 25 to September 7 and will include 20 paintings from the 1960s until the 2010s. The exhibition is concurrent with the closing week of a retrospective of his work at The Kreeger Museum in Washington D.C. on view until July 31.

Charles Hinman’s career spans five decades, stemming from his debut at the historic Sidney Janis Gallery in the early 1960s and his inclusion in the breakthrough show “Shape and Structure: 1965” at Tibor de Nagy Gallery. James Meyer, noted art historian and specialist in Minimalism, wrote “Submitting simple geometries to optical dynamics, the isometric illusionism of [Frank] Stella, Larry Bell, Charles Hinman, Neil Williams, Will Insley, Ronald Davis, and the Park Place artists, Dean Fleming, Tamara Melcher, and Edwin Ruda, was ‘the structural answer to Op Art,’ according to [Lucy] Lippard… it secured the dynamic illusionistic effects of op through stark color contrasts and pared down geometries.” (Minimalism: Art and Polemics in the 1960s, 2004).

In some of the works in the exhibition, like Meeting Point (1969), the dichromatic, geometric structure of the canvas opened the door for Hinman to explore hue, light, and form in direct opposition to the patterned effect of Op art. In another, such as Fair Harbour (1989), Hinman introduces shadow into his three-dimensional work, shifting the perception of color across structured curvatures. And in his last bodies of work, like Analogous Eclipse (2010), the dimensionality of the canvas folded into the wall, reflecting auras of color at changing intensities.

Born and raised in Syracuse, New York, Hinman received his BFA from Syracuse University in 1955 and went on to study at the Arts Student League of New York. In the early 1960s he shared a studio with James Rosenquist on the Coenties Slip in Lower Manhattan. There, he was part of a community of prominent artists including Agnes Martin, Robert Indiana, and Ellsworth Kelly. He moved into a larger studio on the Bowery in 1965 alongside Will Insley and Max Gimblett, where he lived until 2018. During his Bowery years, Hinman’s work has been exhibited and collected by major institutions and collectors around the world. His artwork is included in the permanent collections of the Whitney Museum of American Art, Museum of Modern Art, Los Angeles County Museum of Art, Hirschhorn Museum and Sculpture Garden, Denver Art Museum, Nagaoka Museum in Japan, and Tel Aviv Museum in Israel, among others. He is the recipient of Guggenheim Fellowship and four Pollock-Krasner Foundation grants.