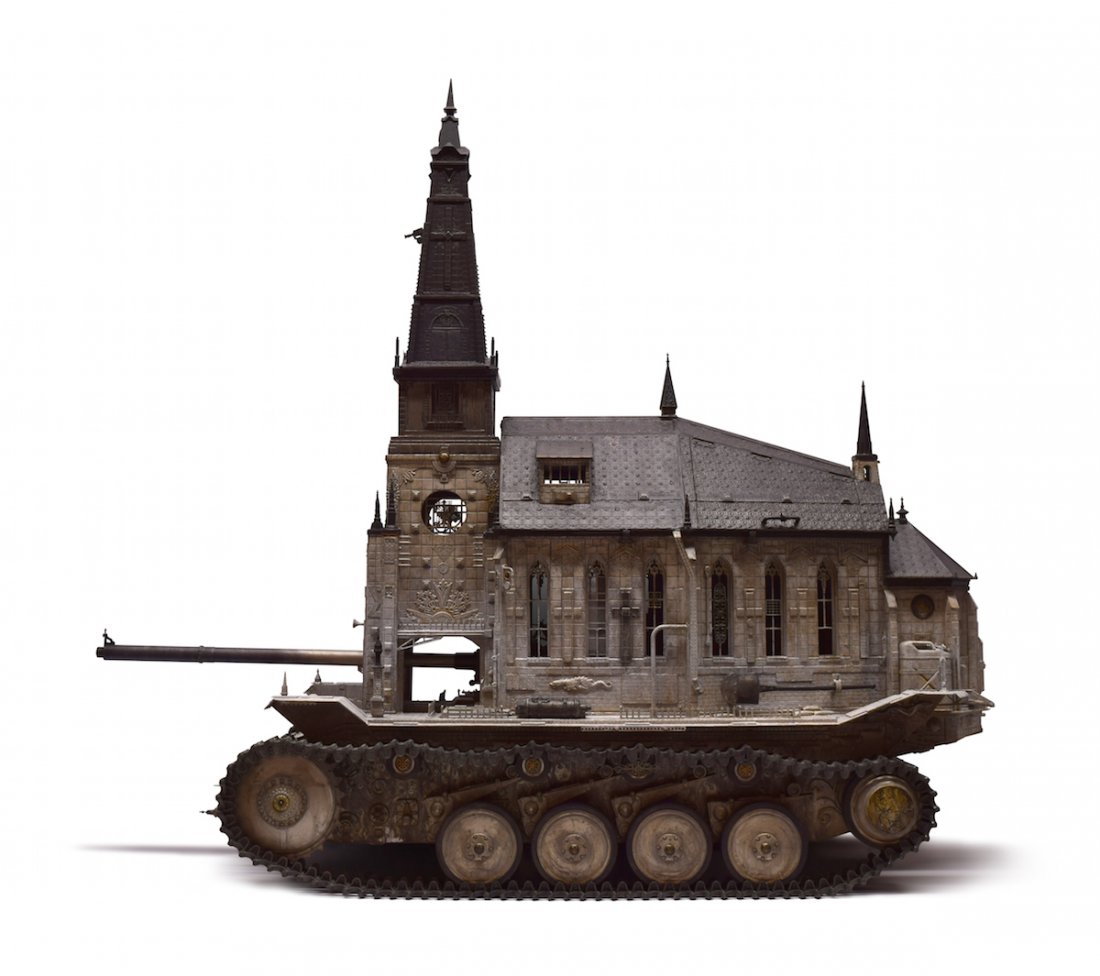 Joshua Liner Gallery is thrilled to announce, Bounty, a two-person exhibition featuring Kris Kuksi’s mixed-media assemblages and Mark Wagner’s montages made of United States banknotes. Bounty opens on November 21 and will remain on view through December 21, 2019. Both artists will attend the opening reception.

Bounty highlights the thematic and stylistic similarities between Kuksi and Wagner’s practices. Both artists rely heavily on the accumulation and arrangement of signifiers to illustrate power structures, most evident in the pairing between Wagner’s Lord, What Fools These Mortals Be! and Kuksi’s Churchtank Type 15. Quoting a line from William Shakespeare’s A Midsummer Night’s Dream that comments on human folly, Wagner’s collage depicts an ornate rose window. Rather than portray a scene that reflects the teachings of the church, the stained glass window shows George Washington strolling outside with a sapling slung over his shoulder, perhaps referencing the notorious cherry tree myth. Similarily, Kuksi uses the architecture of the church to reflect on the entwinement of church and state. The artist adds a tank chassis and gun turret to the structure of a church, accentuating the unholy resonance between the pious power of organized religions and the self-righteous imperialism of the military-industrial complex.

Stylistically, Wagner and Kuksi’s approaches are characterized by arranging found objects into intricate compositions. Discussing how his practice aligns with Kuksi’s, Wagner states, “I think we sort of walk the same path, but in the opposite direction. I take this totally monotonous stack of papers and spin them out into a variety of objects, scenes, and whatnot. And Kuksi takes all these disparate things and completely unifies them.” The extreme density and multiplicity in their two-dimensional and three-dimensional works reward close looking. Wagner’s montages encourage the viewer to reconsider the aesthetic and symbolic value of the dollar bill, while Kuksi’s mixed-media assemblages of small, mass-produced objects feature an abundance of layered vignettes that reveal new discoveries with each glance.

From a distance, Kuksi’s frieze-like works register as architectural ornamentation from the Belle Époque. Upon closer inspection, individual narratives emerge from each sprawling assemblage, which can include several thousand pieces. To create these ornate assemblages, Kuksi painstakingly arranges model kits, jewelry remnants, and kitsch statuary into complex wall sculptures. Juxtaposing Baroque and Rococo design with the rigidity of the industrial landscape, the patinaed surfaces reference “historical narratives, biblical subjects, animal worship, architecture, symbolic views on commerce and development, as well as human psychology and behavior.”

Cutting up bills into rudimentary elements, Wagner uses the shapes, figures, and textures found on United States currency to create complex compositions. The artist tends to “stick to subject matter that is close to the currency,” exploring the intersection of wealth, power, value, and American identity. Many of Wagner’s collages are humorous and lighthearted, while some are macabre in tone. In From Darkest Decay Dumb Blossoms of New Mingling Leap Greenly Into the Ripe Air, Washington sways from a tree swing, exuberantly kicking off a shoe as he propels forward. Unbeknownst to him, the root system of the massive tree ensnares a cluster of skulls in various states of decay.

Mark Wagner currently lives and works in Lancaster, PA. Wagner’s work is in dozens of institutions, including the National Portrait Gallery, Washington, D.C.; Museum of Modern Art, New York, NY; The Metropolitan Museum of Art, New York, NY; Brooklyn Museum of Art, Brooklyn, NY; San Francisco Museum of Modern Art, San Francisco, CA; and the US Federal Reserve Board. He has exhibited at Crystal Bridges Museum of American Art, Bentonville, Arkansas; Flag Art Foundation, New York, NY; Albright-Knox Art Gallery, Buffalo, NY; Getty Center for the History of Art and Humanities, Los Angeles, CA; and Milwaukee Art Museum, Milwaukee, WI. In addition, the artist’s montages have been featured in Time, Newsweek, Harpers, and Art in America as well as on CBS and PBS. This is Wagner’s inaugural solo exhibition with the gallery.