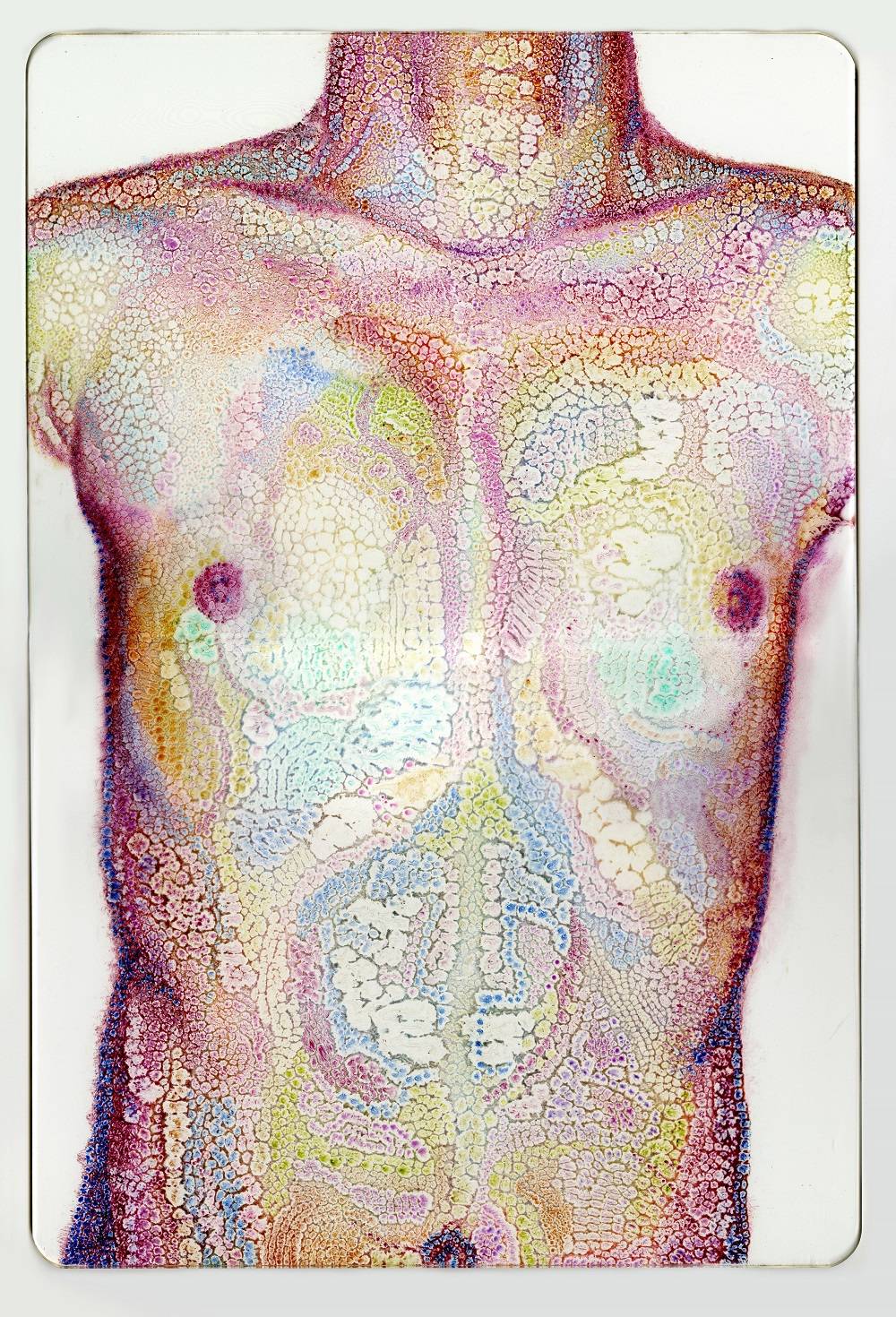 Gallery 456 is pleased to present Body•Mark a solo exhibition featuring the recent works of Chenlin Cai.

I create paintings with visual narratives about relationships between humans and our environment, historical moments and contemporary events. I borrowed some thought-provoking historical moments from the album of time, extracted the images out from the original context, and placed them in the current time and space, thereby creating a visual contradiction and conflict. I visually express the effects of catastrophic events on the human body in a beautiful and poetic way.

My works fuse oil painting medium with traditional Chinese ink-painting expression. My unorthodox use of oil paint on nontraditional surfaces allows me to create artificial cellular structures that divide the images into a mosaic texture. I created a unique texture to mimic the biological cellular structure from an under-the-microscopic perspective. In these paintings, the organic microscopic structures and the macroscopic natural landscape combine in mystifying presentation of the dislocation and overlap of transparent materials.

The transparency of the material brings more visual expressiveness to the overlapping images, therefore, a new form of observation is created. This form expresses the biology of the image as a social metaphor. I try to bring a different visual experience for viewers to ponder the questions about the consequences of human behavior in a wider time-space continuum.

Chenlin Cai is a multidisciplinary visual artist lives in Philadelphia. Cai received his MFA from two world-renowned universities in fine arts, the Tsinghua University in China and the Pennsylvania Academy of Fine Arts in Philadelphia.

Cai's works innovatively combine traditional Chinese ink painting with contemporary art expressions to create a unique visual image that fuses art and science. The uniqueness of his artistic style has caught the eye of collectors world-wide, including many Chinese and American collectors, and the Copelouzos Family Art Museum in Athens, Greece.

Cai has held several solo exhibitions in Philadelphia and New York, including solo exhibition in Freeman's Auction Gallery, Philadelphia in 2018, and 456 Gallery, New York in 2021. Cai has participated in many world-class art exhibitions such as New York Artexpo in 2021 and the 12th Florence Biennale in Italy 2019. Cai won honors, including the “Excellent Artist Award” in “Eye Art•2017 International Youth Art Exhibition” in United Nations Headquarters, New York; and the “Coverly Smith Prize” in the Woodmere Art Museum’s 79th Juried Exhibition, Philadelphia.

Cai served as a judge for the National Youth Drawing Contest hosted by the World Journal for two consecutive years. Cai is also a productive mural artist. He has installed dozens of murals in the United States and China such as at Xuchang City Museum, Korean Cultural Center in Beijing, First Street Green Culture Park in New York, and 10th Street Plaza in Philadelphia Chinatown. Starts from 2018. Cai’s mural story was frequently reported by the Philadelphia Inquirer Newspaper.

Cai is currently working with his artist team on creating a grand mural project for celebrating the 150 anniversaries of Philadelphia Chinatown.