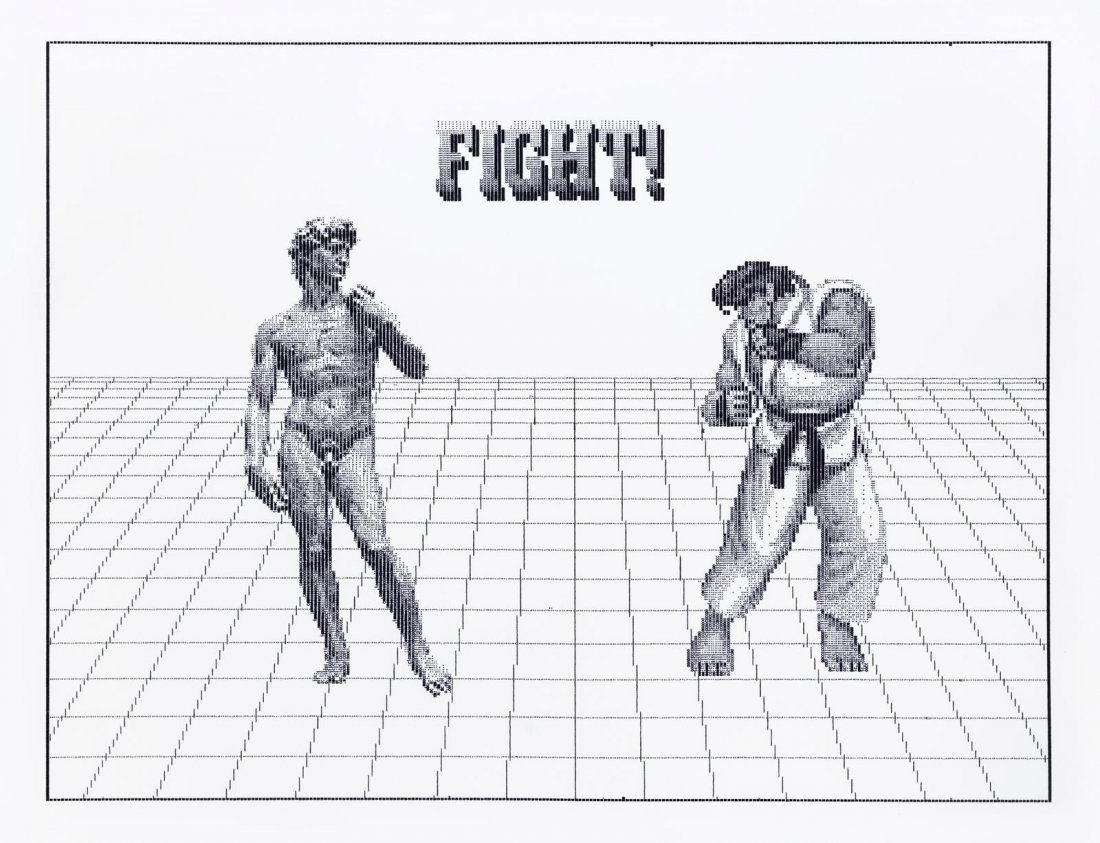 Joshua Liner Gallery is proud to announce Arno Beck’s inaugural solo exhibition with the gallery, Screengrabs. Beck will present new typewriter drawings alongside his conceptual drawings from the Bitmaps and Unpainted series. Screengrabs opens on November 21 and will remain on view through December 21, 2019. The artist will attend the opening reception.

As the exhibition title suggests, Screengrabs, attempts to capture the transient and intangible nature of digital media, by bringing “screen-based impressions into physical, haptic existence.” In order to transfer on-screen material into physical space, Beck begins by creating a draft on a computer. This preliminary work helps the artist determine the best way to translate digital images onto paper using traditional modes of production. Some of Beck’s frequent artmaking techniques include woodblock printing, pen and ink drawing, acrylic painting, in addition to less traditional ones, like using a typewriter to create photographic black and white drawings. Beck’s interplay between the handmade and the digital, seeks to “humanize technology and welcome the glitches of the handmade—the error is part of the beauty.”

Beck’s fascination with the beauty and clumsiness of highly pixelated images and interfaces is reflected in his choice of subjects, which includes retro video game imagery, computer graphics, and contemporary memes. Discussing his affinity for post-internet aesthetics, Beck states, “I stem from a generation that grew up being confronted with the visual phenomena of the computer age, and as a painter engaging with digital culture, I’m transferring those experiences into painting. With my paintings, I aim to portray the essence of the digital. Low-resolution or high-pixelation are key characteristics of digital representation because those are features you won’t find beyond computer-generated imagery.” The simulated painterly gestures in the Bitmaps series recall outdated art-making software, notably Microsoft Paint, which initially released in 1985. For Hunter & Gatherer, Beck arranges a series of seemingly unrelated images into a grid composed of three columns. Mimicking the layout of an Instagram profile, this meticulous pen and ink drawing features an 8 bit Grumpy Cat, boulder, scribble, void cube, and a bust of Michelangelo’s David. As the title suggests, we have become hunters and gatherers of images and information during the information age.

Through an accumulation of strategic keystrokes, Beck uses an old-fashioned manual typewriter to create complex drawings that explore early digital representation. Past works from the typewriter drawing series have depicted vistas of meadows, fields, and mountains, juxtaposed with elements from low-resolution computer programs and video games, such as clouds from NES’ Super Mario Bros. In Screengrabs, Beck continues to explore his adoration for older video game graphics, presenting work that combines 1987’s Street Fighter with famous sculptures from art history. In one work from the series, Ryu is pitted against Michelangelo’s David, while in another, Chun-Li defeats the Venus de Milo, throwing her backward as the words “You Lose” hover above their heads. Typing line by line on Japanese paper, the artist utilizes different letters and symbols to achieve a variety of differing brightness values. From a distance, the eye blends the web of keystrokes, making the work appear almost photorealistic. Closer inspection reveals a dense network of pixelated letters and symbols that resemble binary code.