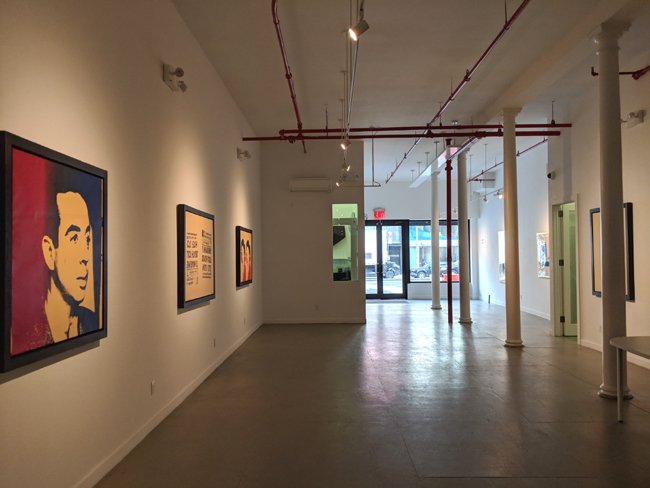 WESTWOOD GALLERY NYC presents a premiere New York City exhibition of unique screenprints by Andy Warhol, curated by James Cavello. The exhibition highlights eleven works on paper from the 1980s. Included are portraits of personalities such as Vincent Minnelli, Jane Fonda, the Marx Brothers, Louis Brandeis, and Sitting Bull, important German and Swiss figures Mildred Scheel, Max Bill and Joseph Beuys, commemorative images such as Truck and The New York Post and a reinterpretation of the classical painting “The Annunciation”. All artworks presented are authenticated and available for acquisition.

In the late 70’s and into the 1980’s Warhol was at the height of creating silkscreened editions of his art and had streamlined the screenprinting process. He hired master printmaker, Rupert Jasen Smith, who worked with Warhol on the process of silkscreening from inception to final image, hand pulling thousands of silkscreen prints. Rupert and his printers worked grueling hours, yet stayed in the background of Warhol’s limelight. The laborious printing process included selecting a black and white photograph transferred to a framed silkscreen, tracing the image, delineating paint areas and hand pulling each paint color across the screen onto the paper or canvas. The initial screenprint was transferred to a large, experimental sheet of newsprint, which was easy to discard if not to Warhol’s liking. The large sheets made it possible to view various color combinations and qualities of line, developing unique working material for discussion.

The unique screenprints in the gallery exhibition provide a view into Warhol’s creative process, revealing the imperfections of paint drips and aberrations in the paper. The Marx Brothers portrait exemplifies the initial trial of creating an outline to simulate a hand-drawn line of the faces of Chico, Harpo and Groucho. However, in the final, editioned silkscreens, the Marx Brothers’ faces are depicted in the same vertical row, but with added mirrored rows of the brothers, transitioning from outline to distinct faces. The Louis Brandeis unique screenprint on view also differs from its’ final edition with varying shapes of color blocking out some of the hand drawn lines within the portrait. Jane Fonda’s portrait on exhibit uses only three screens of color, isolating her blue eyes and enhancing her red lips. In comparison to the unique print, the resulting commercial image portrays a stark contrast with charged line and color.

Warhol’s portraits are symbols of the fame and celebrity that made him popular, but they are also testimonials of his creative genius in pushing the boundaries of the medium. These experimental screenprints are precursors of what became renowned and sought-after editioned prints, and the differences between the artworks on view and the final prints are evident.