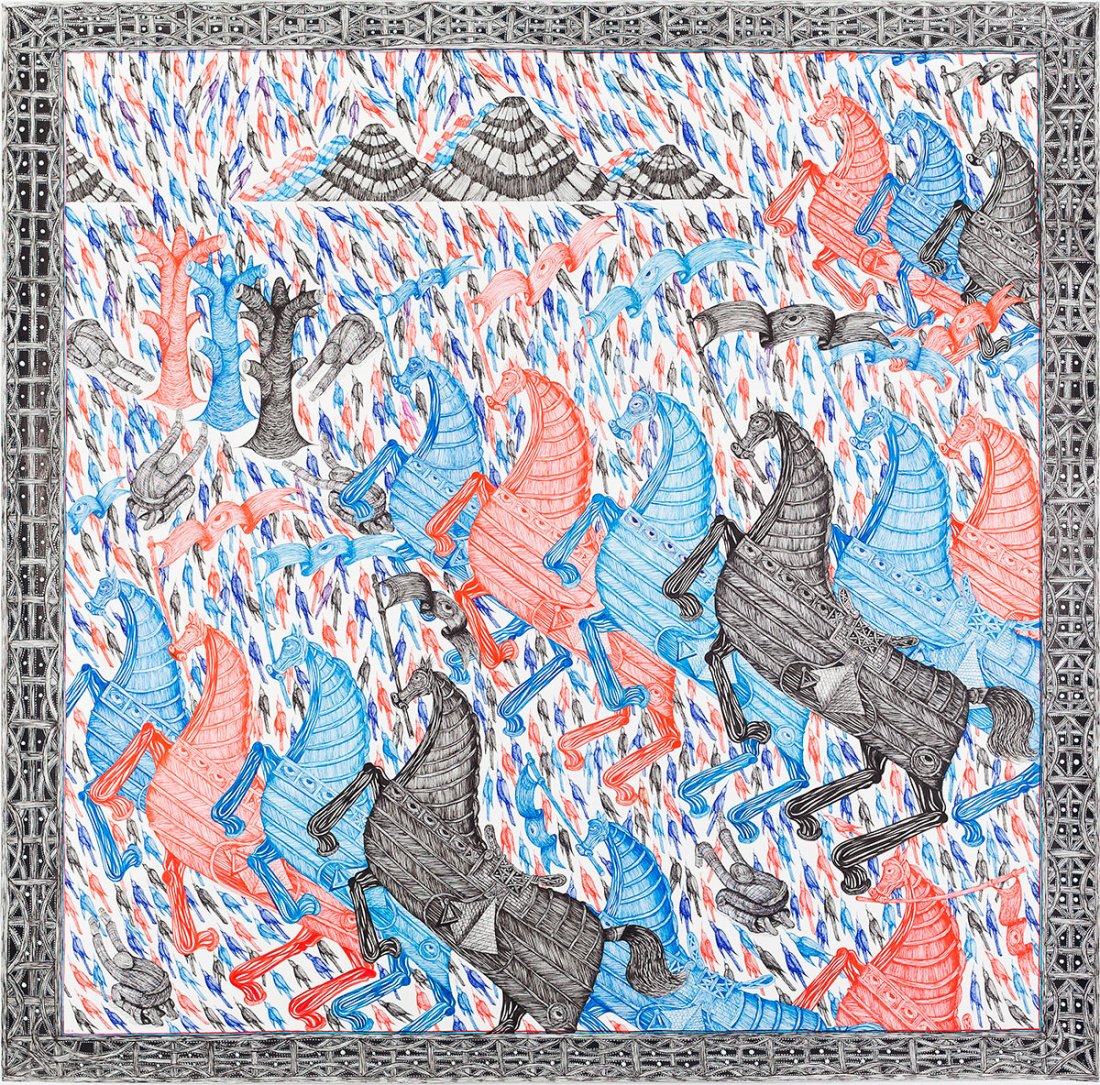 Joshua Liner Gallery is pleased to present Age of Empire, a solo exhibition of new work from Los Angeles-based contemporary artist Andrew Schoultz. This is Schoultz’s first exhibition with the gallery featuring painting, work on paper, and a site specific installation. The exhibition will run from April 28 to May 27, with an opening reception on Thursday, April 28. The artist will be present for the reception.

Having presented his work in various contexts from museums to galleries to public murals, Schoultz is known for his densely layered artworks exploring patterns in history related to war, natural disasters, and globalization. The social, political, and economic crises that manifest as a result, are explored in detail in works such as Broken Tapestry (2016). Exceptionally detailed, the acrylic and collage work features throngs of war horses, elephants, a war ship, and eyes of providence upon an exploding field of radiating bands of color and shredded one dollar bills. Inspired by underground comics, graffiti, German map-making, the archaic illustrations of the Nuremberg Chronicle of 1492, and Persian Miniatures to name a few, the artist’s work is profoundly chaotic both visually and thematically. Schoultz elaborates:

“Chaos and destruction are reoccurring themes in my work because I feel like these things are happening all around us constantly. Whether it is the multiple wars being fought all over the world, the natural disasters that seem to happen on a regular basis, the man-made environmental disasters that are becoming more and more prevalent, to the economic crisis that has been crushing this country’s poor and middle class for years. I feel like you really cannot talk about one of these things without talking about all of them, so it becomes a monster of a subject.”

Schoultz’s work lacks overt references to singular historical events, but rather explores a collective unrest, pulling from disparate global affairs and histories such as the wars in Iraq and Afghanistan, the 2016 U.S Election, the rise of China as an economic giant, natural disasters, the pangs of the recession in the United States, to the fall of the Persian and Roman Empires. Although the artist’s themes are unequivocally universal, the work is instantly recognizable through Schoultz’s distinctive, illustrative style. Repeated use of motifs such as Germanic war horses, exploding brick walls, all-seeing eyes, blasting canons, shredded US currency, slave boats and Trireme-style war ships battling turbulent waves permeate the work. The broad range of visual elements in the artist’s work speaks not only of Schoultz’s conglomerated themes and influences, but also points to the artist’s interest in the cyclical nature of history, as illustrated through his juxtaposition of primitive and modern symbolism.

Contrasting the intricate ink and acrylic illustrations of his two-dimensional works, Schoultz will present an abstract site specific installation in the gallery. Characteristically minimal, the installation features a pillar of graduated grey bands of paint from floor to ceiling. Three smaller pillars painted in graduated primary colors collapse into the standing column like dominoes falling. Although in opposition to the visual complexity of the works on canvas and paper, the installation explores the same themes of destruction and power structures. Deliberately leaving the work open to interpretation, Schoultz notes, “Perhaps the standing pillar works under the theme that after all, it is still standing. Or perhaps it could allude to the idea that there is just one more pillar to destroy. Destruction is often referred to as something negative, however—sometimes in history—the preexisting structure has become so bad that it needs to be destroyed in order to build something new. We have seen this theme occur in history many times.”