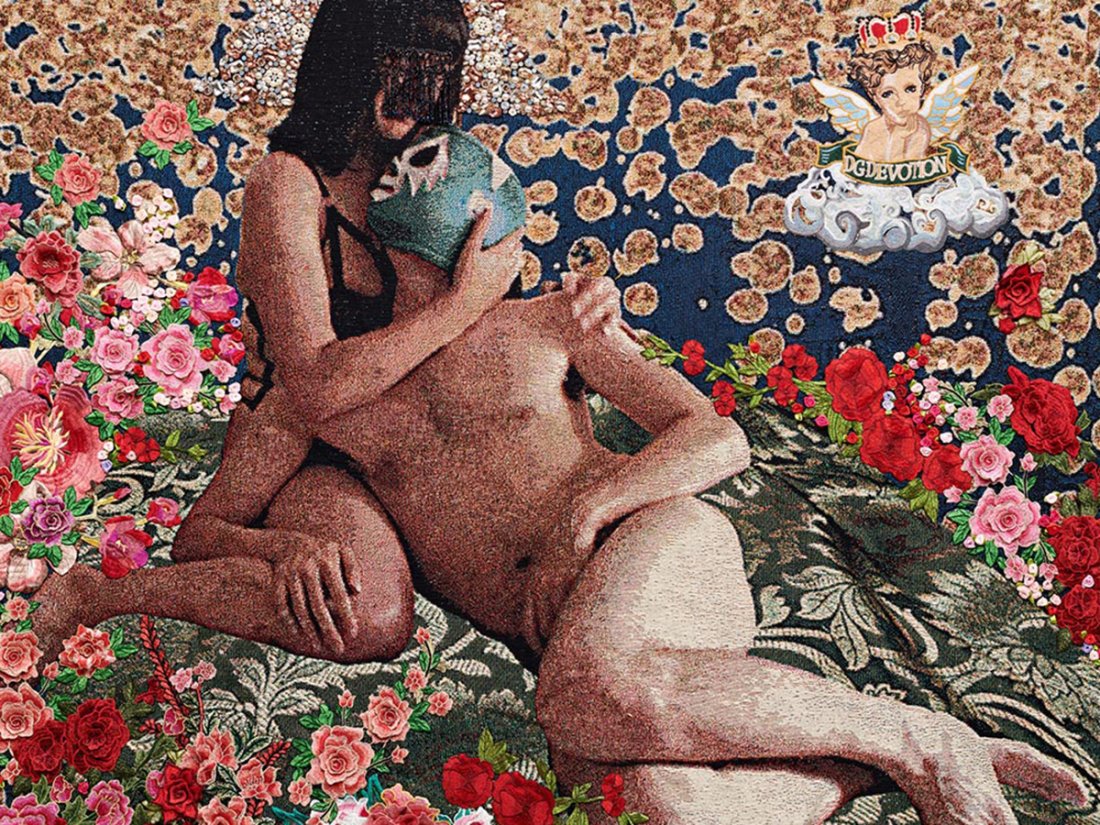 The Untitled Space is pleased to present “Katie Commodore: Between Friends and Lovers” solo exhibition opening on November 21, and on view through December 18, 2020.  Curated by Indira Cesarine, “Katie Commodore: Between Friends and Lovers” debuts a series of large scale erotically charged figurative tapestries, created with detailed adornments and unique embroideries, along with a number of her signature portraits in gouache, miniature watercolor paintings on ivory, as well as works on paper including intaglio etchings, metallic foil cut outs, and photogravure prints. Katie Commodore is an interdisciplinary artist who concentrates on creating intimate portraits of her friends. In 2000 Commodore received her BFA in illustration from Maryland Institute College of Art. In 2004 she obtained her MFA in printmaking from Rhode Island School of Design where she is currently an adjunct professor.

“Everyone is my friend and they are allowing me to be a witness to their love, which in turn is then celebrated by everyone that sees it.” Over the past few years, Katie Commodore’s artwork has concentrated on depicting real people’s sexuality, although not necessarily their sexual preferences, but rather sexuality in the broader sense. Her intimate portraits address what is it that makes them feel sexy, how they express that physically, and how it evolves over the years for them as individuals. “We change our clothes every season; our physical appearance through body modification, losing weight, gaining weight, tattoos, etc; we change our kinks and sexual preferences partner to partner, year to year.  Our sexuality, and how we feel about it, is in constant flux; the same way that we redecorate our homes, change the wallpaper and curtains, change the sheets.” States the artist on her portraits. Commodore likens this subtle change in how her friends express themselves to the way society also expresses its collective self through decorative patterns. “In a roundabout way, it can be looked at as a meter of a population’s ‘sexuality’ - the public expression of the private. Bright colors, vibrant patterns, clean lines, and minimal decoration all provide a window into the personalities that chose or created them. Historians and anthropologists often use the decorative remnants (pots, jewelry, frescos, etc.) of past cultures to gain valuable insight into the lives of the people that created them, the same sort of cultural portrait can be drawn from our design choices today.”

Throughout the years, she has focused various mediums including drawing, painting, printmaking, textiles, and scrimshaw. She has often emphasized materials that are not considered “fine art” but were rather thought of as women’s “hobbies” and in so doing highlights their traditional merit. A majority of her artwork is portraits of her friends during their most erotic moments, acting as a celebration of personal power, beauty, and sexuality.  It is a subtle, but often rich moment that shows the kink, sexual fulfillment, and the sexual interests of those closest to her. “Any activity that helps someone express their sexuality is beautiful, to be supported, and worthy of being immortalized in art.” She states of her sexually charged portraits which depict real people in the moment, captured through private photo sessions with the artist which are used as references for her paintings or prints.

Commodore was diagnosed with Multiple Sclerosis in 2007, which forced her to adjust her artistic practice. Her diagnosis motivated her to explore ways of maintaining the vibrant patterns and detail that she’s known for while not having to rely completely on her super fine motor skills. “Right before I was diagnosed with MS my artwork got much more detailed and pattern-based, and I think that was an unconscious reaction to the fact that I was losing my super-fine motor skills. Since then, I've adapted my studio practice to accommodate what I can and cannot do. I don't draw with a pencil or pen as much anymore, paint brushes are more forgiving when it comes to small hand tremors. I do much more planning and sketching in the computer. Embroidery has been a real change that allows me to maintain the compulsive marking and patterns while there's no need for perfect hand-eye coordination.”

Her latest series of large-scale figurative tapestries are ripe with intricate details. In a continuation of her signature style she presents bold figures against dramatically complex patterns, pushing the visuals into the realm of surreal erotic fantasies. The sheer scale of the works heightens the drama in a cinematic manner with the life-sized figures taking center stage. “Tandem to creating miniatures and paintings with vivid patterns, I’ve always been interested in creating life-sized portraiture. In grad school I did a series of life-sized relief prints and over the years I’ve done several life-sized drawings that I then spent months filling in with patterns. There was always something about portraying my models in a completely relatable scale that took the image from something precious to something actually more personal, the viewer can feel their gaze and the energy in their pose, feel their weight and almost come away feeling like they know the model in real life. Several years ago, I wanted to have custom tapestries made to reference the historical value of tapestries while giving tribute to the fact that often women were the actual makers of the tapestries which were usually designed by men. My digitally woven textiles start out as drawings in my computer. Like my works on paper, the patterns are historical wallpaper and fabric designs that range from the medieval to contemporary examples. I embroider on them, adding appliques (chine collé, if you will), bejeweling and beading away for hours, turning them into monoprints. I’m creating something new that combines the immediate gratification of print on demand fabricated works with the meditative, time consuming craft of embroidery and fiber arts. I juxtapose mass-produced elements with the uniqueness of each piece, elevating each patch and plastic bead to something more substantial.” She also introduces a number of text works in fiber that complement the series with their adventurously powerful statements.

Katie Commodore has exhibited throughout the United States and Europe, including England, Italy, Germany, and Greece. She has had solo exhibitions at Baby Grand, NYC, and SHAG, Brooklyn. Her work has been previously featured in a number of group shows presented by The Untitled Space including “(Hotel) XX” at Spring/Break Art Show, “IRL: Investigating Reality” and “Secret Garden”. Other notable exhibitions include “FEMME” presented by Spoke Art and Juxtapoz Magazine, SCOPE Art Fair, “StitchFetish 6” at The Hive Gallery, and “Facing the Walls” at The VETs Gallery. Residencies include ChaNorth, Pine Plains, New York; Red Light Design, Amsterdam, Holland; and One Night Residency, London, England. She is currently the Administrative Director of Crux, LCA, a cooperative of Black XR Creatives and Producers that focuses on Black storytelling and creating a foothold in the burgeoning vocabulary of new media of VR and creating Black wealth. Commodore has been featured in a number of publications including The New York Times and Dazed Digital, among others. She currently lives and works in Providence, Rhode Island.