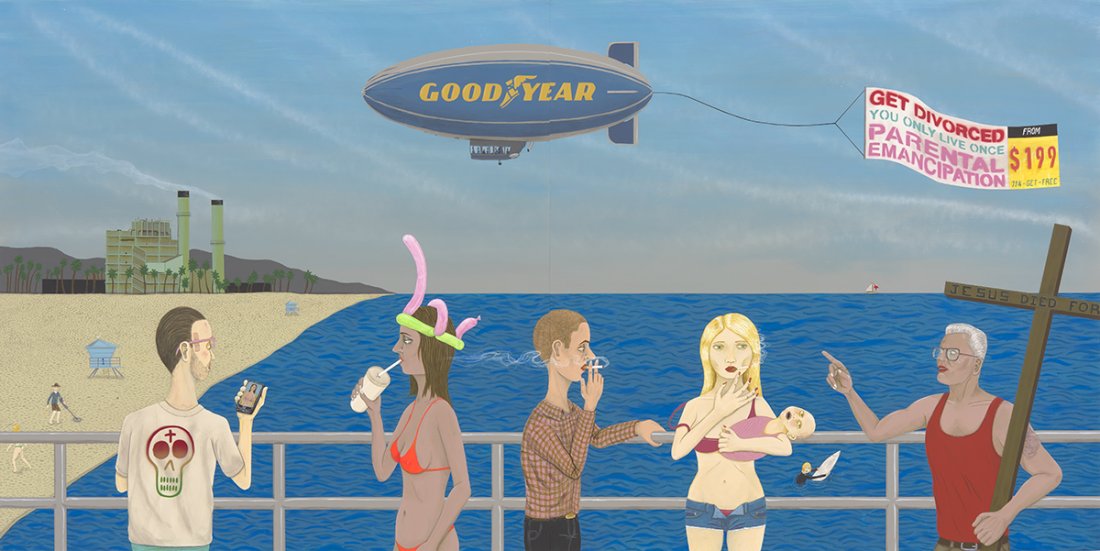 Joshua Liner Gallery is pleased to present the fourth annual installment of Summer Mixer, a group exhibition featuring new work from seven contemporary artists including Daniel Rich, Johnny Abrahams, Jane LaFarge Hamill, Aaron Johnson, Mark Mulroney, Ed Templeton, and Parra. The exhibition features painting and small sculptures, however the majority of this show explores the numerous possibilities of the former. Summer Mixer will open with a reception on Thursday, July 14 and will run through to August 19, 2016.

Brooklyn-based Daniel Rich’s paintings explore the role of architecture and monuments as beacons of political power structures, and social narratives. Devoid of any human presence, the artist’s sharp geometric, flat blocks of color on Dibond are meticulously assembled via a complex layering of hand cut vinyl and then painted with enamel, building detailed interpretations of his carefully chosen subjects. Rich explains, “My paintings point to the shifting of the significance and meaning in both images of places and the places themselves.” In WTC (Blue), this highly symbolic role of architecture is powerfully revealed through Rich’s rendering of the iconic façade of the World Trade Center. Although only depicting a fragment of the building’s infrastructure, the political and social significance is instantly recognizable through the Twin Towers’ unforgettable iron exterior, despite the painting’s largely abstract characteristics.

Pushing further into abstract territory, Brooklyn-based Johnny Abrahams’ works on canvas traverse the seemingly endless possibilities of the painted line. Often working in black and white or limited color palettes, Abrahams’ straight, curved and zigzagged lines stack upon and run parallel to each other to create patterns of increasingly intricate elements. In one piece, a shaped canvas of three collections of parallel lines intersecting in the center form a simple yet stimulating moiré pattern, while another work from the artist combines moiré, block colors, and  negative space, creating a harmonious balance. Reminiscent of Bridget Riley and Sol Lewitt’s wall drawings, these optical works on canvas push the limits of visual perception, creating a disorienting yet mesmerizing sensation.

In contrast to the crisp line work of Rich and Abrahams, Jane LaFarge Hamill’s oil paintings bear sweeping gestural brushstrokes in a myriad of colors that converge upon the canvas. The artist’s most recent work investigates contemporary portraiture that attempts to capture the intangible elements of personality and human emotion. Using memories of fleeting moments and interactions with her subjects, the works are likened to painted auras, breaking the constraints of portraiture as a subject reserved for representational painting.

Continuing the trend of luscious painterly expression, Brooklyn-based Aaron Johnson’s works offer a visual feast of color, and layers of texture. Attraction versus repulsion, pain and pleasure, and life in the midst of inescapable death are all prominent themes in the artist’s recent work. Simultaneously alluring and ghastly, Johnson’s Viper Moon paints a beautifully gory scene of Goya-esque lovers embracing, whilst ripping at each others’ hearts and limbs, blood and flesh cascading. These paintings, which Johnson refers to as “reverse paintings,” follow a meticulous method of painting their foregrounds first, ending with the background. In antithesis to the intricacy of the reverse paintings, Johnson will also show a selection of “sock paintings,” which possess an energetic surface sculpted with socks drowned in expressive brushstrokes.

Syracuse-based artist Mark Mulroney will present new works that examine the construction of the modern day Venus in popular culture. Mulroney’s acrylic and collage diptych of Pamela Anderson (Pamela/Amplea) seeks to expose the function of the ‘sex symbol’ in popular culture as a vehicle to inspire desire. However, during Pamela’s transformation from human being to fictitious siren, her identity as a real person is lost, as illustrated through Mulroney’s depiction of the Baywatch star in a red swimsuit, juxtaposed with a disfigured representation of the original. The artist explains, “These images are not portraits of individuals, they are abstractions relying on exaggeration, warping and stylizing the human form into something that becomes one dimensional.” Adding to this, Mulroney notes this construction of the female form as an object of desire is repeated throughout history as far back as the Venus of Willendorf, as explored in a collection of primitive-like wooden sculptures of bare breasted women.

Lastly, Dutch artist Parra’s silhouetted nudes evoke the jubilance of a Matisse cut out melded with the psychedelia of a 60s music poster. Falling Into Myself frames two weightless curvaceous figures suspended in space laid out in poppy complementary colors, their heads cut off by the canvas edge. The artist’s most recent work explores faceless figures in a response to the narcissism of social media and the overpopulation of “selfies.” Boldly graphic in their limited color palettes, Parra’s new works explore a voluptuous formal language that is hypnotizing in its beautiful simplicity.

A reception for Summer Mixer will be held on Thursday, July 14 from 6–8pm. Many of the artists will be in attendance.