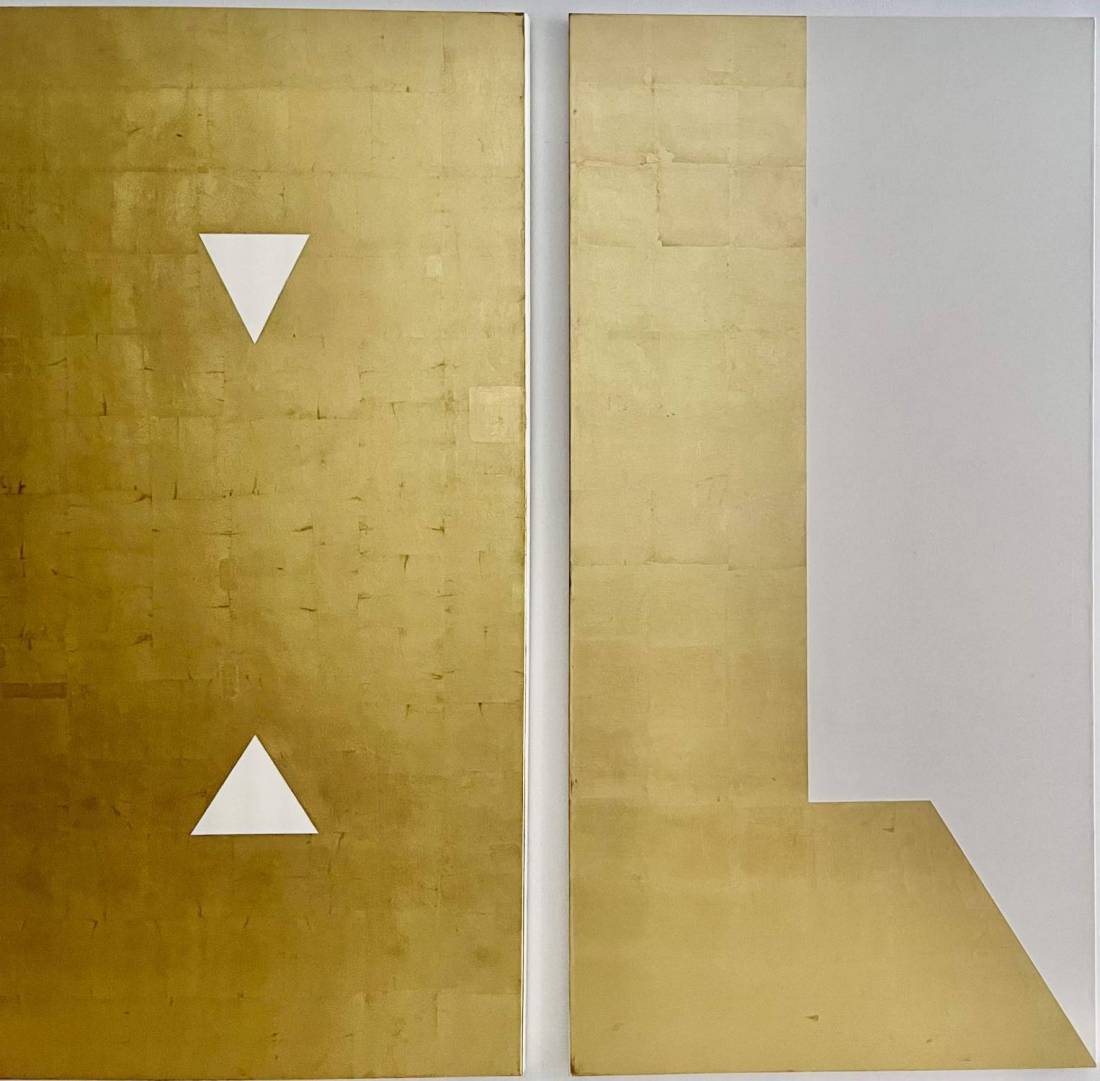 XL: This Is Not Another Latino Exhibition

What you see is not always what you get, but this time in a good way. Rather than a journey from a bird's eye view, the artworks gathered in 532 Gallery Thomas Jaeckel’s current exhibition entices its audience into a metaphysical trip in which topics such as identity, race, and belonging are constantly pulsating under the surface. Hence, thoroughly enjoying it requires diving deep and peeling numerous layers, some even cryptic for a trained eye. While America is a land of immigrants, some of these pieces are alien to an American audience unfamiliar with exile, forced displacement, or the different narratives of self-identity under post-colonial or totalitarian societies.

After trespassing Elio Rodríguez’s Jungla Negra/Black Jungle (60”x60”, so^ sculpture, 2022), a sculptural treatise on race and ancestry in a metaphorical intergenerational dialogue with Wifredo Lam, which resembles a window invaded by the leafy forest, a nocturnal 3-d landscape ensemble of protuberances and branches of canvas, synthetic-fiber and sequins, the visitor faces a crossroad. Like in the Hamletian nunnery scene, a fork divides the gallery’s two chambers in paths that summarize the essence of being in material or immaterial ways, depending on the route you follow.

To the left, José Ángel Vincench’s Exilio/Exile XI, XII, XIII (79’x39” each, 2016), the elegant and labyrinthic geometric work with gold leaf, reflects on forced displacement and the aseptic retinal violence, how the demagogic speeches create patterns that hide inside each other.

In Haitian-born American artist Jean-Guerly Pétion’s In Between/Beneath the Mirror (83”x53”, acrylic mixed media paper, 2020), the composition is dominated by a central figure with a sword, a black Gabriel, the angel of Annunciation—also of resurrection, mercy, vengeance, death, and revelation—blowing a golden trumpet . The silhouette's wings, a fence, and the sails of a sailboat on the horizon are made of a collage of words, a patch of printed material, representative of the artist's aesthetic, also seems a subtle reference to the recycling of European imaginary—the religion, the myths, and the bibliocentric cultures. Volatile words that guide and give lightness.

Armando Mariño’s Revolution in the House of Colors (84”x84”, 2011) closes this room with a majestic depiction of diversity. In a subtle twist, lights and shadows will be as important as colors, for they add elements to what you see with the naked eye. Another possible reading is that the carnival of diversity might be a distraction that accentuates the invisibility of human beings hidden in plain sight over the roof.

Following to the right, the three artworks debate the material perspective of being through footprints and reminiscences, architecture and ruins, and the cartographies of a fictional nation.

Gustavo Acosta’s Introduction (70”x70”, 2016) depicts under a grid of transparencies the Sport City Coliseum, an indoor sporting arena in Havana, Cuba—with a detail of the José Marn Memorial in the distance, two landmarks of pre-revolutionary architecture—a place where some of the trials of the revolutionary courts took place in 1959. Acosta remarkably uses light and color contrasts, superposing a geometric layer of yellow, burgundy, and dark violet to the subjacent architectural ensemble, abating the pictorial space without forcing perspective and composition in a visual tour de force to draw attention to perception and reality.

From Acosta’s uninhabited human landscapes of concrete and steel, the exhibition transitions to Carlos Rodríguez Cárdenas’s artwork “Horizon” (62”x 128”, 2019). Cardenas’s monumental work seems a reminiscence of the artist’s life-long exploration of architecture and mural painting—one of which (Way to March Forward/ Manera de marchar adelante) was prominently displayed recently in the documenta Halle in Kassel during documenta fifteen from June to September 2022. The oblong panel, with embedded maps and fabrics, traces the artist’s itinerary into exile, displayed as a border wall of brick and mortar, crowned by nautical roses.

Alberto Alejandro Rodríguez’s Auriga (12”x12”x2” each, 2021) is an installation of a panel made of nine pieces from the Auriga series accompanied by a video showing his process of recycling debris and layers of plaster collected by the artist from the ruined walls in Havana. The fragments removed from their original context and embedded in the minimalistic artifacts can be seen as proto or neo archeological samples containing centuries of history or trophies of the demolition and the collapse of an inhumane and failed ideology.

This is an exhibition immixing the main trends in contemporary art; and while most of the artists—in a parallel celebration of the Hispanic Heritage Month—are of Hispanic (Cuban) ascendant, and all of them have a Latino background, their artworks go beyond the borderlines of gender and culture to get engaged in a direct and incisive real-time dialogue with the problematics and trends of contemporary art. The artists reunited in “XL: This is Not Another Latino Exhibition” might have many things in common, such as their Caribbean DNA, their trans territoriality and displacement, resounding personal poetics, and the use of large formats in some of them, but the main virtue is that they excel—this is the moment when you can read XL out loud—in their practices, either emergent and established alike, they are powerhouses, pathfinders and critical players in the contemporary art scene who are here to stay.