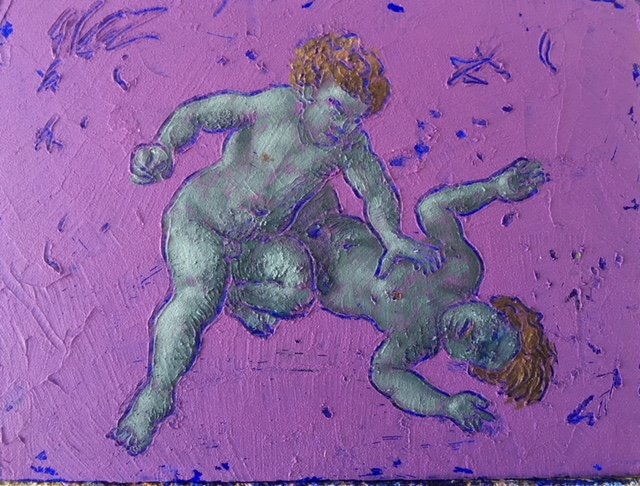 Indefatigable New York/British painter John A. Parks, takes on the subject of putti, those mysteriously animated infants who show up in so many classical paintings. Aping and often exaggerating adult behavior, they reflect the complexities of human interaction in ways that can be both charming and frightening.  Parks paints them fighting, whispering, frolicking, dancing and flying as he explores and exploits their curious existence.  Part artistic convention  and part real children, his putti offer a tool for the painter’s imagination, a vehicle with which he can make explicit the powerful forces of attraction, deceit and violence while presenting them in a form that is often beguilingly playful. Parks has also used putti to substitute for the traditional classical figures of the constellations, filling the night sky with combinations of putti interacting in all manner of improbable ways. While many of his paintings are executed in a straightforward oil technique he has also explored heavier surfaces in some of them, creating powerful sgraffito drawing scored through layers of thick acrylic paste, and then building paintings richly soaked in color on this heavily textured surface. These works take on some of the authority and curiosity of ancient mural cycles, brought up to date with an edgy touch, fine drawing and a sparkling imagination.

John A. Parks (1952 ) was born and educated in England earning a masters degree in painting from the Royal College of Art, London.  He has lived in New York since the late seventies and exhibited his work for many years with the Allan Stone Gallery. While his early work was realist in nature his later work has explored a variety of avenues in representational painting.  He is a member of the faculty of the School of Visual Arts, New York.