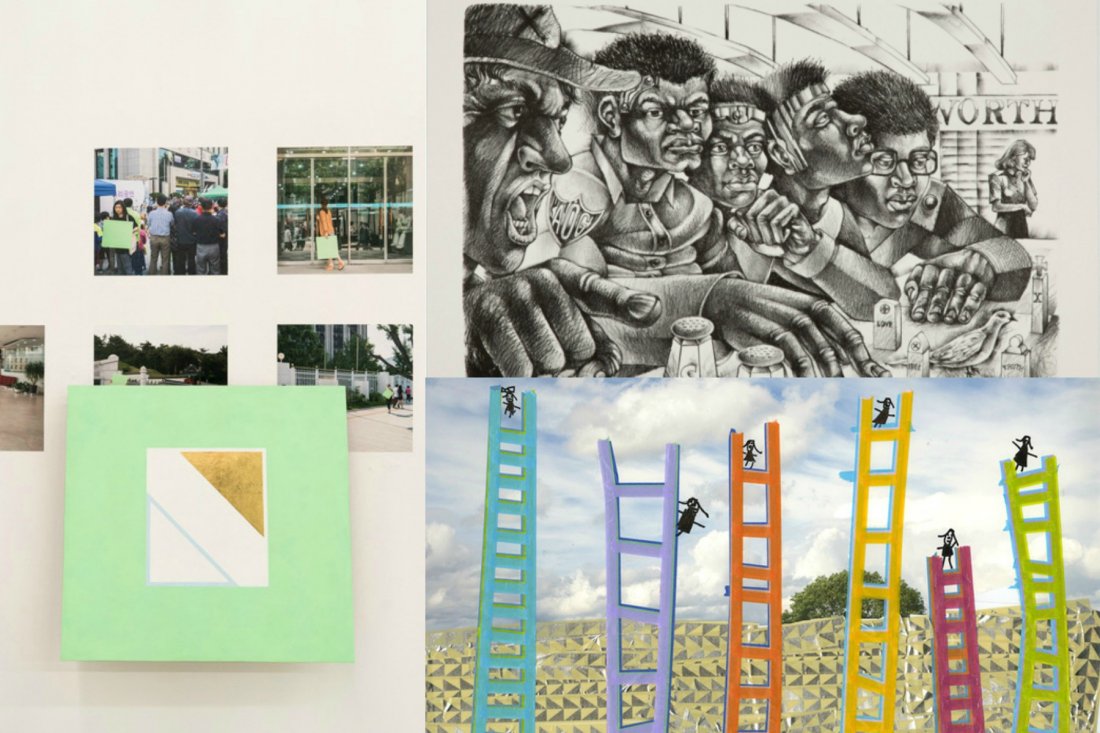 Equity Gallery is pleased to present Peaceable Kingdom, a group exhibition organized by Wayne Adams, featuring the work of Wayne Adams, Doug Ashford,  Brent Everett Dickinson, Michelle Mackey, Steve Prince, Kenneth Steinbach, and Michelle Westmark-Wingard. The seven artists within the exhibition are responding to Peaceable Kingdom, a series of over 100 paintings titled by the nineteenth century artist and Quaker minister, Edward Hicks. Where Hicks’ paintings each revolve around a singular composition and theme, the works in this exhibition offer a unique and contemporary interpretation of a “Peaceable Kingdom.”

Hicks’ series of paintings are based on the Biblical passage of Isaiah (11:6): “The wolf shall live with the lamb, the leopard shall lie down with the kid, the calf and the lion and the fatling together, and a little child shall lead them (NRSV).” Hicks utilized this prophecy to invoke a hopeful relationship among enemies. Feral carnivorous predators such as lions and leopards placidly lounge and mingle with domesticated livestock and children, sometimes even cuddling up next to them. In a few of the earlier works of the series, Hicks depicts two factions of bitter political enemies, indigenous Americans and European colonizers, happily partaking in civil discourse. However, despite the strong, otherworldly serenity imbued within the paintings, these pastoral, utopian visions were created during a time of great strife. The passage and painting serves as prescription for what Hicks sought for his beloved Quaker church in the 19th Century, which was itself imploding in the midst of painful internal divisions and conflict. Hicks repeatedly portrays an idyllic scene in the midst of the pain and chaos of his present reality in the hope that the art would serve as an idealistic guide and incentive to quell the ongoing schism, as well as to serve as a glimpse into the artist’s own desired vision for the future.

Much as in Hicks’ time, the population of the world is inundated with a staggering volume of tumultuous news involving political and cultural conflict.The wake of the worldwide turbulence provides the motivation to reconsider the need for a new “Peaceable Kingdom,” or, in other words, artworks that aim to fight injustice, heal festering political wounds, and forge a better tomorrow through the near spiritual power of the image itself. The artists within Peaceable Kingdom grapple with and examine the possibilities and limitations of the visual arts within a political sphere.

Much like Hicks’ series of paintings, the work included in the exhibition aim to overcome the current maelstrom of political unrest not through the typical fury and intensity associated with political/activist art, but through visions of positive and aspirational change. Aspects of this intent manifests itself in many forms, ranging from Doug Ashford’s photographic depictions of aesthetically pleasing abstract art interacting with several instances democratic rebellion in South Korea, to Michelle Westmark Wingard’s collaborative art project with her young daughters depicting a series of ladders meant to combat the divisive nature of President Trump’s proposed border wall, to Steve Prince’s litographs of young civil rights activist artistically rendered in a manner evocative of Northern Renaissance depictions of righteous mythical warriors and armor-clad holy knights.

Throughout the show, several questions are raised: Are there new images that can similarly point us out of political upheaval, violence, racial and gender discriminations, and toward some new heaven of calm and tranquility? Can heaven be present among us, while the systems of our culture rage against each other? Each artist in Peaceable Kingdom contends with these inquiries through making their own unique approaches, propositions, prophecies, and observations about the past, present, and future.

Peaceable Kingdom is on view at Equity Gallery through August 23, 2018.

Wayne Adams is a Brooklyn-based artist who received his BFA from Calvin College and MFA from Washington University in St. Louis. Adams has exhibited throughout the Midwest, New York, and Vienna, Austria. Recent shows include, “mEaster” Square Halo Gallery, Lancaster, PA (2017), “Wayne Adams is Speaking in Tongues: a show of objects and images organized by the unrelenting voice of interpretation” Barrington Center for the Arts, Gordon College, Wenham, Massachusetts (2014), “Works Off Canvas” Denny Gallery, New York, New York (2013), and “Adams | Miracle” STOREFRONT Gallery, New York (2010). Adams currently serves as president of the board of Christians in the Visual Arts.

Doug Ashford is a teacher, artist and writer. He is an Associate Professor at The Cooper Union for the Advancement of Science and Art where he has taught three-dimensional design, sculpture, public art and theory seminars since 1989. The collaboratively taught Interdisciplinary Seminar and lecture series he began there is now in its fifteenth year. Ashford’s principle visual practice from 1982 to 1996 was the artists’ collaborative Group Material that produced over 40 exhibitions and public projects internationally. The group’s work has been recently collected in the book Show and Tell: A Chronicle of Group Material, (Four Corners Press, 2010)  – edited by Ashford’s long time collaborator, Julie Ault. Since 1996, Ashford has continued to make paintings, write, and produce museum and public projects. His work in public practices are encapsulated in the book Who Cares, (Creative Time, 2006), a publication built from a series of conversations between Ashford and an assembly of other cultural practitioners on public expression, beauty, and ethics. The recent publication, Writings and Interviews by Doug Ashford, (Mousse Publishing and Grazer Kunstverein) was published in 2013

Brent Everett Dickinson, MFA, is a multi-disciplinary artist who has had exhibitions, performances and film screenings around the U.S., Canada, and Europe, including the Essl Museum, Vienna; This Red Door, Berlin and New York; Socrates sculpture park, New York; Chelsea Music Festival, New York; and the Cornerstone Music Festival, Chicago. Prior to joining APU, Dickinson held a leadership position at the innovative NYCAMS program in New York for eight years. He is currently working on an experimental narrative film that explores what happens when a mountaintop experience occurs on a mountain that is only 180 feet above sea level.

Michelle Mackey’s paintings explore time and memory through abstracted architectural imagery.  She references places that contain ghosts of a buried past, whether political or folkloric - these places house collective memory. Mackey has received an MFA from Pratt Institute, Brooklyn, NY (1999) and a B.A. from Furman University, Greenville, SC (1997). She has studied in Cortona, Italy and Taos, NM for extended periods, and has been a resident at the Vermont Studio Center and 100W Corsicana, TX. Throughout the last decade Mackey has had solo exhibitions in Berlin and New York City, and participated in group exhibitions in Dallas, Marfa, Brooklyn, and New York City.  Mackey currently lives and works in both Brooklyn, NY and Dallas, TX.

Artist Steve A. Prince is a native of New Orleans, Louisiana, and currently resides in Detroit, Michigan, where he serves as an assistant professor at Wayne State University. He received his BFA from Xavier University of Louisiana and his MFA in printmaking and sculpture from Michigan State University. He has shown his art internationally in various solo, group, and juried exhibitions and is the recipient of numerous awards and honors, including the 2010 Teacher of the Year for the City of Hampton, Virginia. An accomplished lecturer and preacher in both secular and sacred settings, Prince has conducted workshops across the U.S. and internationally. His goal is to take his visual ministry to the streets where art becomes a bridge to help people find their way from brokenness to beauty. Prince is represented by Eyekons Gallery in Grand Rapids, Michigan, ZuCot Gallery in Atlanta, Georgia, and is the owner of One Fish Studio LLC.

Kenneth Steinbach is Professor of art at Bethel University, where he teaches classes in sculpture, design, and creative practices. A graduate of Cranbrook Academy of Art, he has exhibited widely across the U.S. and elsewhere, including the Soap Factory in Minneapolis, Trykkeriet Printmaking Center in Bergen, Norway, and Blue Star Museum in San Antonio, Texas. Kenneth recently concluded a four-year research project into the practices of successful mid-career artists. The resultant book, Creative Practices for Visual Artists: Time, Space, Process will be published by Routledge Press in 2018. He is the recipient of several grants, including a Bethel University Edgren Scholars grant in support of his research into artistic practice and several grants from the Minnesota State Arts Board. Kenneth has also been awarded the Arlin G. Meyer prize in Visual Arts by the Lily Fellows Foundation, and a Faculty Excellence in Teaching award from Bethel University. He is married to Kari Steinbach, a freelance theater director in Minneapolis.

Michelle Westmark Wingard is a Professor of Art and the Gallery Director of Bethel University’s two exhibition spaces. Her photographic and curatorial endeavors often explore themes of memory, perception, and interconnection. She has curated several exhibitions and has also exhibited her own photographic work nationally. Wingard has been a recipient of the Jerome Foundation Travel and Study grant (2015) and the Minnesota State Arts Board Artist Initiative Grant (2017) to photograph the site in Belgium where her grandfather's plane crashed during WWII. Wingard received her MFA in photography from Pratt Institute in Brooklyn, New York in 2006 and currently lives and works in Minneapolis, Minnesota.