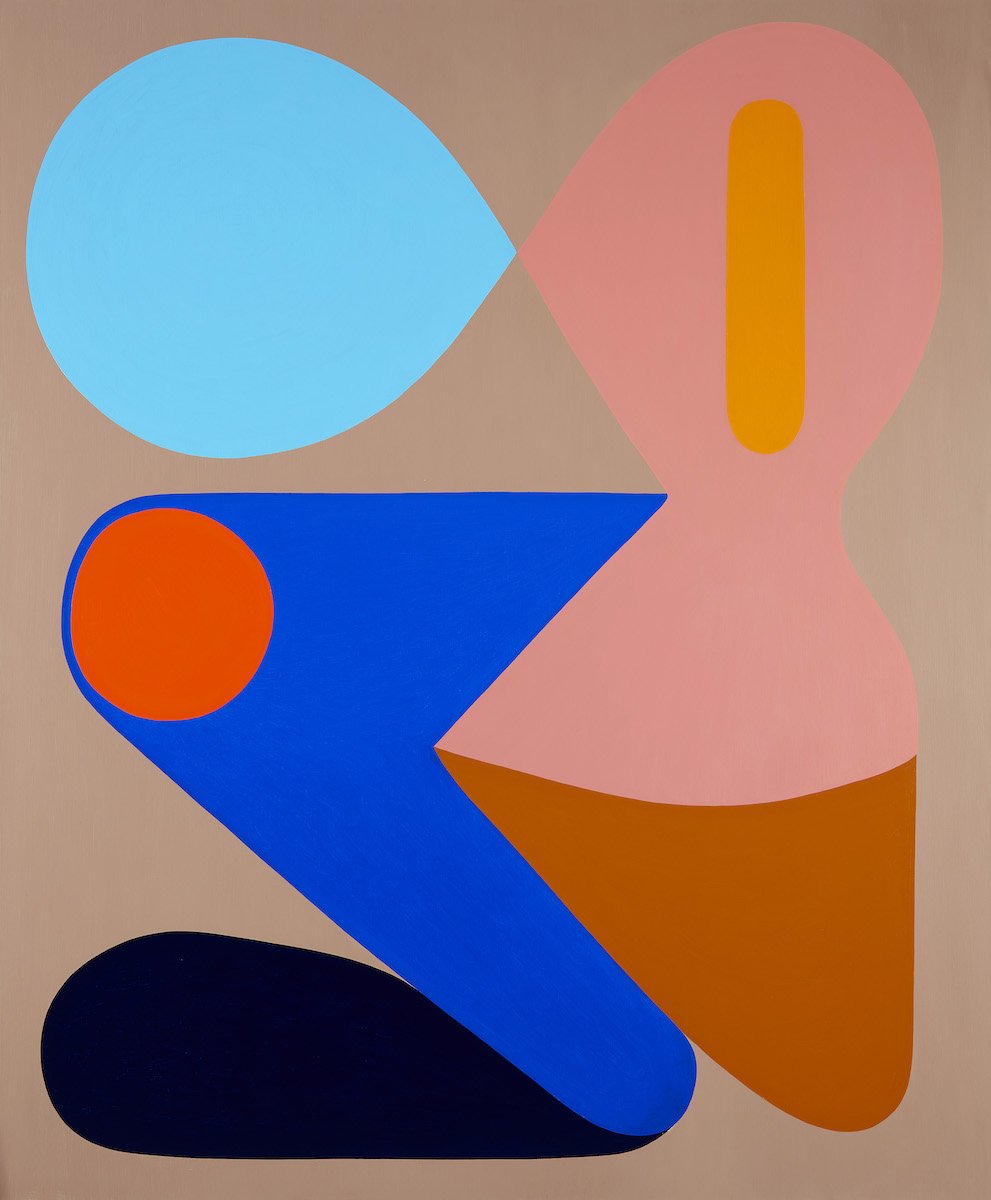 Joshua Liner Gallery is pleased to present Intertwined, a two-person exhibition featuring the works of California based artist, Serena Mitnik-Miller and Sydney, Australia based artist, Stephen Ormandy. Intertwined opens on October 10 and will remain on view through November 9, 2019. Both artists will attend the opening reception.

Intertwined juxtaposes Mitnik-Miller’s serene geometric watercolors alongside Ormandy’s hard-edge oil on linen canvases and marble sculptures. Using altogether different mediums, both artists explore the effects of layering, motion, and infinity through undulating forms and lines. This fascination with undulation can perhaps be traced to their shared affinity for the ocean. Never far from the water, Mitnik-Miller grew up in Hawaii and currently lives in the Malibu. As the artist explains, “I have always been most inspired by the natural world, the deserts, the mountains, the ocean.” Not only does Mitnik-Miller’s medium of choice, watercolor, pigment suspended in an aqueous solution, require water, but her curvy compositions echo the rhythm of the waves. Likewise, Ormandy’s adoration for the water is clear when he asserts, “My love for the ocean is always with me.” The conjoining bands of white marble in Twist and Tower, fold in on themselves as they crest, conjuring the swelling of the waves.

Fashioned by interconnecting patterns of color and concentric shapes, Mitnik-Miller’s watercolors continue to “evoke a balance between chaos and control, a tension between the organic nature of the watercolors against the confined geometric walls.” Whereas previous works were characterized by subdued transparent hues, the artist’s newest watercolors feature a bolder, more saturated color palette. Beginning with a composition that is first laid out in pencil, Mitnik-Miller outlines the overall structure. Without the use of tape or stencils, the artist then manipulates watercolor, a medium known for its unpredictable nature, into impeccable geometric, linear arrangements. The color subtly blends and changes from one inch to the next, as the artist pushes and pulls the pigment through her patterns, giving the work a sense of perpetual motion.

Similarily, Ormandy’s hard-edge paintings examine the tension that arises from overlapping curvy, abstracted forms. Born of the subconscious mind and inspired by the rhythm of shape, space, color, and design, Ormandy’s hard-edge paintings often resemble abstracted figures and landscapes. His forms recall 21st-century modernist painters and sculptors, such as Hans Arp, Henri Matisse, Henry Moore, and Clement Meadmore, infused with the magnetism of 1960’s Pop art. The artist uses contrasting colors and shapes to achieve a push-pull effect, which Ormandy revers to as hug and repel. Ormandy states, “I’m looking for vibration and rhythm, the play of line creating positive and negative space, searching for tonal balance through contrast or harmony, while developing chroma relationships that hug or repel.” Pulsating with color, Spinning Top includes bold geometries comprised of puzzle piece-like forms that sinuously connect together, creating a harmonious composition.

Serena Mitnik-Miller lives and works in Malibu, CA. She was born in 1981 in Massachusetts but spent most of her childhood in Hawaii. Mitnik-Miller received her BA in photography and printmaking from the University of California in 2008. The artist has exhibited domestically and internationally, presenting solo exhibitions at the Bolinas Museum, Bolinas, CA; Chandran Gallery, San Francisco, CA; Park Life Gallery, San Francisco, CA; Curators Cube, Tokyo, Japan; and Art Park Gallery, Byron Bay, Australia. In 2014, Mitnik-Miller completed a large-scale mural at the Facebook Headquarters in San Francisco. Mitnik-Miller and husband, Mason St. Peter, own General Store located in San Francisco and Los Angeles. This is the artist’s fourth solo exhibition with the gallery.

Born in Melbourne, Stephen Ormandy graduated from The City Art Institute (now known as UNSW Art and Design) in Sydney in 1985. During his time at the college, he met Louise Olsen and Liane Rossler and in their final year of study they established the design company Dinosaur Designs, which has grown to be one of Australia's leading design brands specializing in resin and metallic jewelry and homewares. The artist has exhibited at Melbourne Museum, Melbourne, Australia; MCA Sydney, Sydney, Australia; Galerie Bessieres; Paris, France; PKM Gallery, Seoul, South Korea; and Olsen Gruin, New York, NY. Ormandy’s work is held in public collections across Australia, including Artbank, The Sir William Dobell Art Foundation, The Powerhouse Museum, The National Gallery of Victoria, and The Art Gallery of Western Australia.