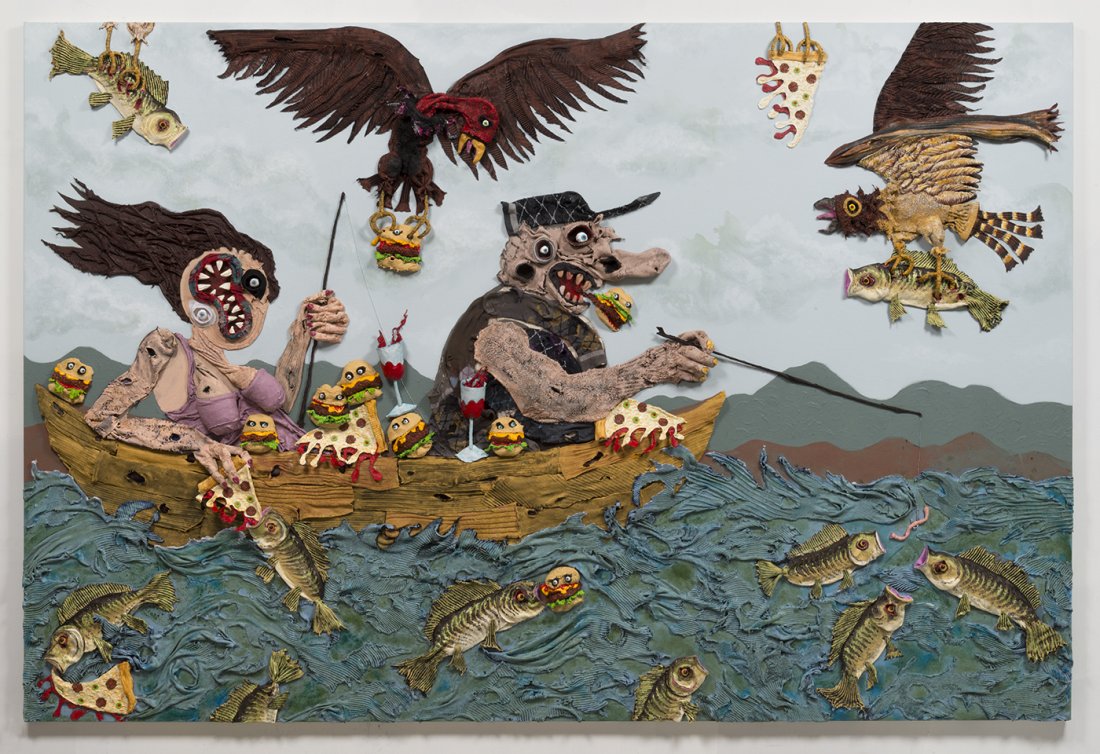 Johnson has created two distinctive and wildly innovative approaches to painting: his well-known “reverse-painted acrylic polymer-peel” paintings and his sock paintings.  The two bodies of work exist in counterpoint; meticulously layered Indian-miniaturesque details in his reverse-paintings starkly juxtapose the swashbuckling brushstrokes created by a clunky impasto of flung socks in his sock paintings.

Uniting his two modes of work is Johnsonʼs inimitable style, a painterly madness flowing forward from his influences of Goya, Peter Saul, Picasso, Ensor, Llyn Foulkes, and the Hairy Who. Johnson’s paintings are a delight of seductive surface, garish color, and entangled flesh.

Aaron Johnson holds an MFA from Hunter College, 2005, and lives and works in Brooklyn. His work is in permanent collections at such institutions as the Museum of Modern Art, the Fundacion Mehr,  and the Weisman Foundation.His work has been included in museum exhibitions at The Museum of Modern Art, NY; The Hudson Valley Center for Contemporary Art; The Knoxville Museum of Contemporary Art; The Katzen Center at American University; and MASS MoCA, MA.He is the recipient of many awards, including The MacDowell Colony Fellowship, The Corporation of Yaddo Residency, The Marie Walsh Sharpe Space Program, and the VCCA Fellowship. Johnson’s work has been reviewed in numerous publications including The New York Times, The Huffington Post, The Village Voice, ArtNews, and ArtForum.

In my paintings I construct absurdist allegories featuring comic grotesque characters.  Technically I believe in an experimental approach to painting that evolves the historical medium into a contemporary adaptation.  I have developed two main modes of making paintings: reverse-painted acrylic polymer-peel paintings and sock paintings.  The methods involve reverse-painting, meticulous detailed layers, and polymer peel transfer; or the opposite: building up a chunky impasto of old socks .  My spectrum of interests ranges from socio-political critique on one end to existential human questions on the other; each individual painting will fall somewhere between those two poles.  These themes interest me: the American macho cowboy archetype, campy horror film tropes, the wild west American frontier dreams, vampires, the saucy seductress muse, hound dogs, kitty cats, grinning skulls, gun violence, perpetual war, pickup trucks, ghosts, claustrophobia, domesticity, houseplants, breakfast, toasters, donuts, coffee, television, conspicuous consumption, the genocide of the Native Americans, faded glory, the anxiety of the contemporary human condition, the lust of the American dream as inseparable from its crumbling demise.  A coupling of eros and thanatos, the beautiful and the grotesque, attraction and repulsion, is fundamental to my work.  A wicked sense of dark humor infects my work, as ultimately my central purpose might be to take all that darkness and transform it into light.