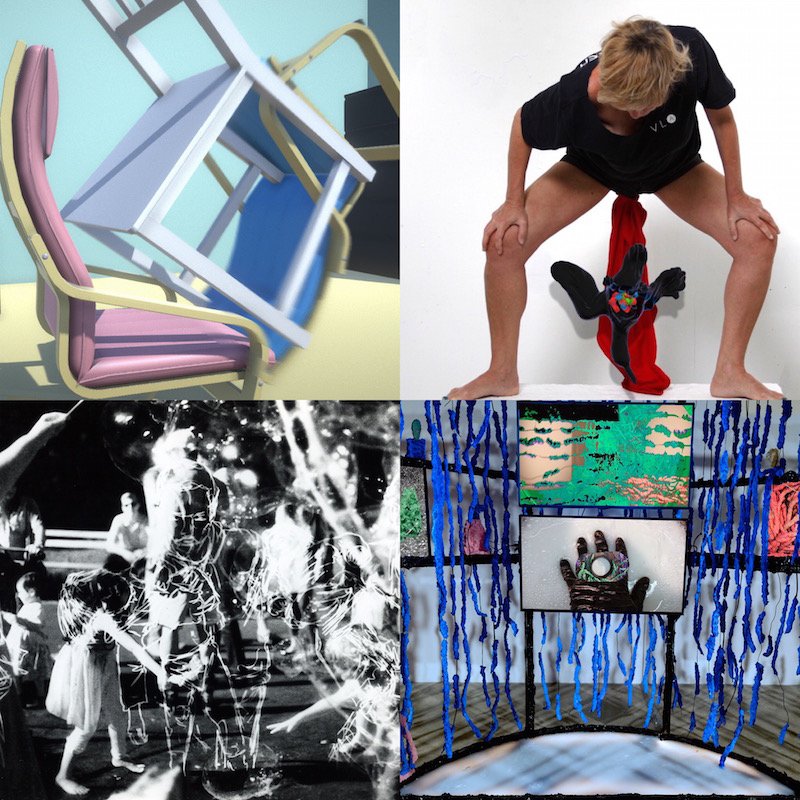 Equity Gallery is pleased to present Collapse of Vision, a group exhibition in collaboration with Residency Unlimited, featuring the works of Eva Davidova, Dakota Gearhart, Ryan Kuo and Farideh Sakhaeifer.  The exhibition will be on view from November 30th through December 16th, 2017 with a public opening reception on Thursday, November 30th, 6-8pm.

Collapse of Vision combines the perspectives of four artists whose work each uniquely addresses environmental, social and behavioral issues. Eva Davidova explores the transfer of cruelty from an individual decision to a facet in a complex network of decisions through performance, photo-based animation and computer generated 3D sculpture.  Dakota Gearhart works to collapse hierarchical standards whether social, material or informational through video and multimedia installations and the use of abandoned materials. Ryan Kuo creates software simulations of family dynamics and uses video game tools to coax erotic performances from furniture, leaving us to question the anthropocentricity of user-based technology (above image from video, The Way I see It).  Farideh Sakhaeifer, through the use of photographs, sketches and collage deconstructs the remnants of war and crisis to explore the collapse of the individual through despair and loss.

With thoughtful consideration and shared views of technology and innovation, each of the four engages the audience through creative enterprise.

Residency Unlimited (RU) supports the creation, presentation and dissemination of contemporary art through its unique residency program and year-round public programs.Each residency is tailored to maximize the residency experience: to help support and realize short-term projects, as well as advance longer-term goals. Residents benefit from the creative, technical and logistical support of our dedicated staff, weekly studio visits by curators and other arts professionals, and RU Activities and events through which residents are introduced to the New York art world and have access to RU’s extensive national and international network

This exhibition is made possible in partnership with Residency Unlimited and with support from the National Endowment for the Arts / Art Works Grant.

Eva Davidova is a Spanish/Bulgarian multidisciplinary artist based in New York. The issues presented in her artwork—behavior, cruelty, ecological disaster and manipulation of information emerge as paradoxes rather than assumptions, in an almost fairy-tale fashion. Her practice involves drawing, performance, installation, computer generated 3D sculpture and photo-based animation. Since 2015, Davidova has  been developing on her multimedia artwork, Global Mode, a project focusing on mythologies, 3D animals, performance, and Virtual Reality.
She has received the 2008 M-tel Award for Contemporary Bulgarian Art, the 2009 Djerassi Honorary Fellowship, support from the Shearwater Foundation, and fellowships from several other artist residency programs. Davidova is currently an AIR resident artist at Residency Unlimited with support from NEA.

Dakota Gearhart is the progeny of a philosophizing mechanic and feminist director who lives and works between Seattle, WA and Brooklyn, NY. Identifying as a bisexual mermaid, her strategies in photography, video, and installation respond to and expand upon emergent qualities found in nature and culture through staged fantasy.
She is the recipient of the Artist Trust Project Grant, the Residency Unlimited NEA Fellowship, the Puffin Foundation Grant, and is currently a finalist for the Neddy Artist Award. Her completed residencies include the NARS Foundation, Brooklyn; Recology, Seattle; Vermont Studio Center, VT; Wassaic Project, NY; and MASS MoCA, MA.

Ryan Kuo is an artist and writer based in New York, NY and Cambridge, MA. He received a Master of Science in Art, Culture and Technology from MIT in 2014. His work utilizes techniques gleaned from video games, web design, motion graphics, and sample-based rave music. Kuo is currently building an artist’s book about aspirational workflows, File: A User’s Manual, modeled after software guides for power users. Other points of interests and themes utilized lately in Kuo’s artwork include containers and whiteness.
Kuo’s works and writing have been recently shown at Spike Art Quarterly, Berlin; Goldsmiths, London; Carpenter Center for the Visual Arts, Cambridge, MA; Boston Cyberarts, Boston, MA; MIT Media Lab, Cambridge, MA; Front/Space, Kansas City, MO; and Minibar, Stockholm; He was an NEA Art Works resident artist at Residency Unlimited during the summer of 2017.

Farideh Sakhaeifar is a New York-based artist born in Tehran, Iran. She received her MFA from Cornell University in 2011 and her BFA from Azad Art and Architecture University in Iran in 2008. Sakhaeifar’s work ranges from photography to installation and sculpture, and is usually related to her life experiences. She looks to past forms of ethnic, political, and cultural control in order to reflect upon new forms of expression that highlight the human struggle to establish autonomous forms of self-expression. Her work seeks to produce a translational understanding of the social and political struggles in which she has been involved either directly or indirectly.
She was awarded a Lower Manhattan Cultural Council Residency in 2012-13 as well as the 2017 Bric Media Arts Fellowship. Her work has been widely published including at ArtFuse and Hyperallergic.