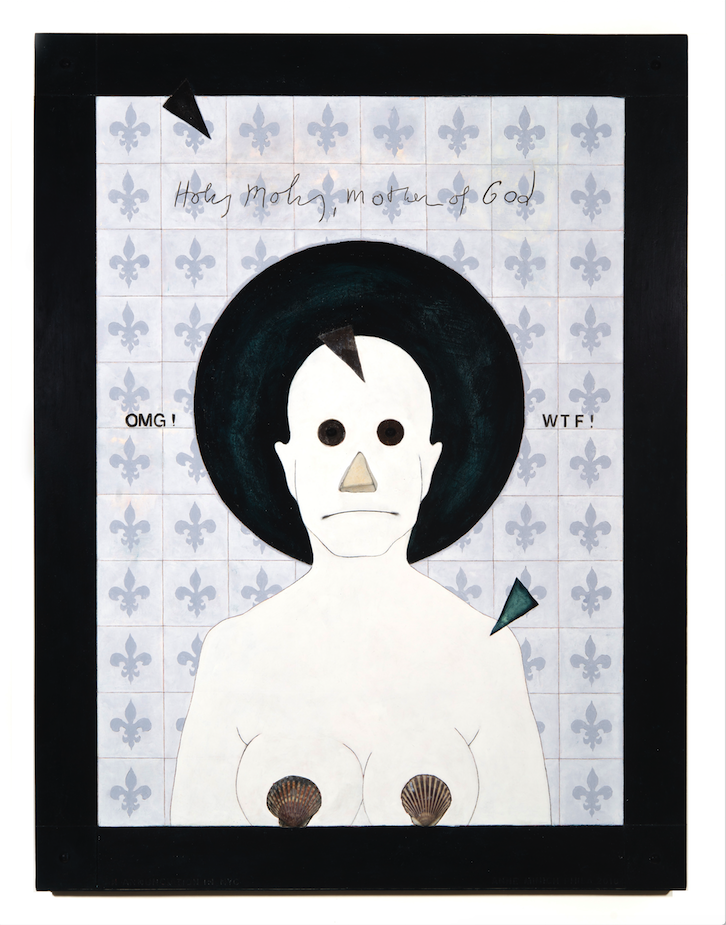 This is the first exhibition to bring together a substantial group of drawings from across the artist’s practice. Drawing has always played an outsized role in Minich’s evolving work, as a source for probing dreamlike visions, developing her own personal mythologies, or paying homage to friends, family, lovers, and artistic inspirations.

Similarly, Minich’s paintings are painstakingly made and suffused with a life spent traversing the human body’s physical limits and subverting society’s normative boundaries. Built by hand and intricately carved, these works are inlaid with found material collected either from Minich’s wanderings or were given to her from friends both living and dead. She also uses text as another medium for exploring the figure and articulating humor, intimacy, and memory. Minich’s play with language and campy tropes reveals her kinship with Marcel Duchamp. Yet Duchamp is not the only connection to Philadelphia’s rich artistic heritage in Minich’s work. Her restrained formal vocabulary and concern for detail, for example, call to mind Quaker aesthetics.

The body has always been at the center of Minich’s practice. Recalling when she first attended summer classes as a high school student at PAFA in 1948, she explains:
“I was thrilled at being able to simply stare at naked bodies with a perfectly good excuse to do so. It represented a sense of freedom I’d never experienced. The models had to pose for 25 minutes at a time, no matter what; a model got her period during a pose, had to keep it and then fled when time was called. The sight of the blood flowing down her leg was for me a thrill. Another time an instructor caused a model to have an erection (contained by a jock strap). He kept the pose and then fled when time was called. He returned in ‘proper order’; I had no idea what I had just witnessed but knew it was eventful… I’ve not lost those fascinations and they are continuing to serve me well.”

Minich renders the body with meticulous detail and careful craft, yet with an eye towards the messy and often transgressive possibilities of what it means to live and die in a body. The works presented here reveal the inextricable nature of longing, communion, transformation, decay, and ecstasy.

Anne Minich studied at the Pennsylvania Academy of Fine Art (PAFA) before taking a step back from art making to raise a family. She returned to art in the late 1960s and lived in New York City until moving to Philadelphia permanently in 1983. Recent solo presentations include Anne Minich, A Survey at White Columns (New York) and Anne Minich: Boat Series at PAFA (Philadelphia). Her work has been included in recent group shows at Gavlak Gallery (Los Angeles), Fleisher/Ollman Gallery (Philadelphia), Jack Barrett Gallery (New York), among others. She has been an artist-in-residence at MacDowell Colony and the recipient of the Gottlieb Emergency Fund award, the Pollock-Krasner award, and the Distinguished Alumni Award from PAFA. Her work is in a number of public and private collections including the Hall Art Foundation, PAFA, the Woodmere Museum, the Walker Museum of Art at Bowdoin College, and has been reviewed in The New York Times, New York Magazine, and Vulture. Concurrent with her exhibition at Thomas Erben Gallery, Minich’s work is included in a group show at the Villa Lontana in Rome, Italy.