George Segal Gallery to present the exhibition: Ben Wilson: From Social Realism to Abstraction this Fall 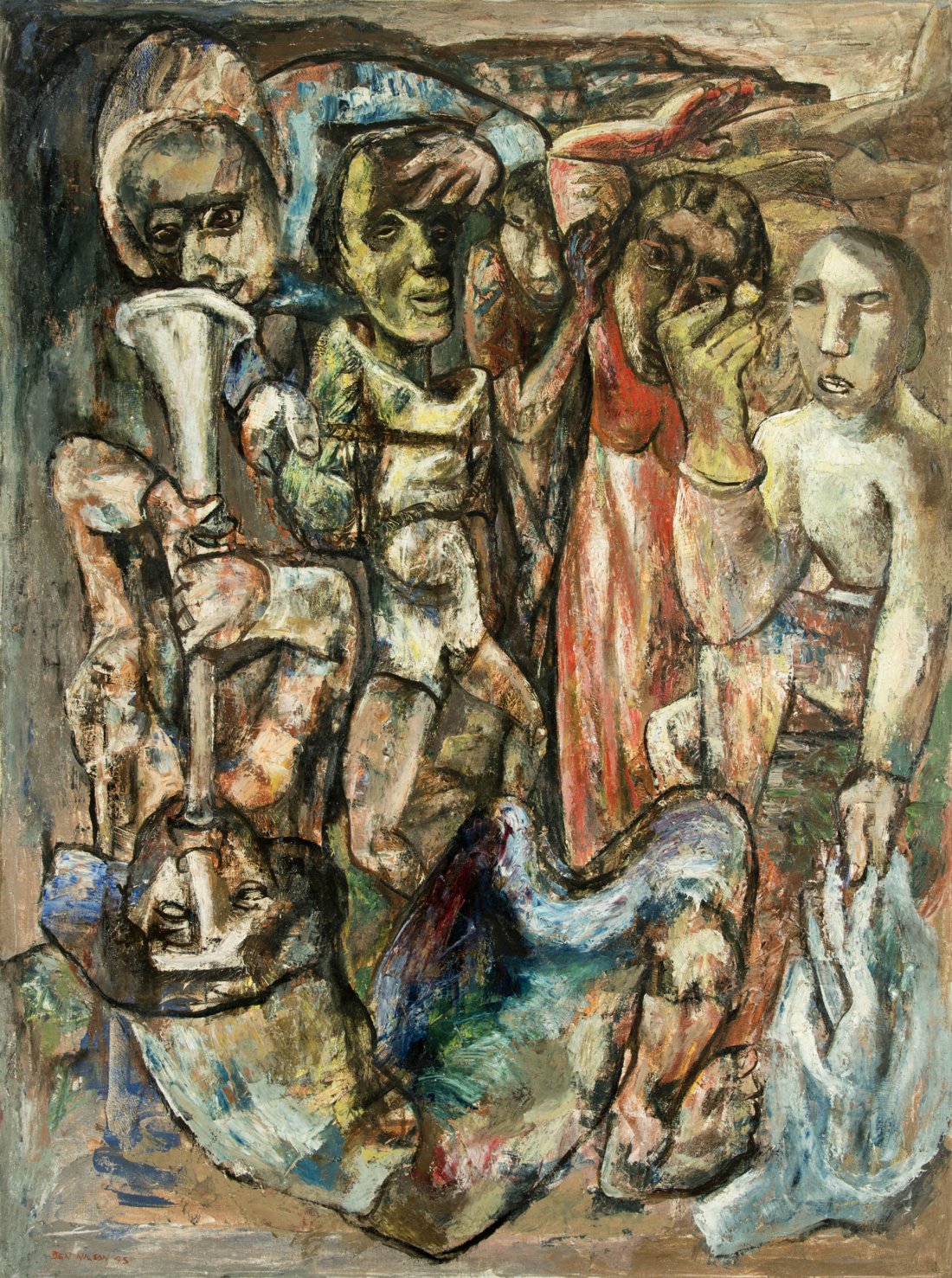 Ben Wilson: From Social Realism to Abstraction at Montclair State University’s George Segal Gallery will present a core group of works selected from those generously gifted to the university by the Ben and Evelyn Wilson Foundation. This career-spanning exhibition brings together several bodies of work that illustrate Wilson’s progression from politically engaged Social Realism to layered, geometric abstraction. The exhibit will be on display at the George Segal Gallery from September 6 through November 4, 2017.

Wilson (1913–2001) began his career as a WPA artist in New York City in the 1930s and 40s with works that reflected upon the violence in Europe. His Cubist-inflected early pictures grew into a mature body of paintings that adapted Surrealist elements. Wilson’s figures convey the sense of suffering and anxiety that infused the politics of the time, a reality that the artist felt needed to be shared with a wide audience.

In the 1950s these abstracted figures morphed into a more symbolic, expressive style that nevertheless retained a suggestion of figuration. Over the next decade, like many advanced American artists of the period, Wilson moved away from the figure entirely and into a layered geometric abstraction that featured energetic line and vibrant color. These paintings represent Wilson’s mature production, and in them he embraced the freedom of a fully developed personal aesthetic.

Throughout his life, Wilson dedicated himself to education and to sharing his art with the community. First in New York and then in New Jersey, Wilson sought to disseminate his ideas through exhibitions and relationships with educational institutions, libraries, and Jewish community groups. This gift of both artwork and archival materials to Montclair State University furthers the artist’s wishes to connect his art to the local public.

"Wilson began as a card-carrying Social Realist with an axe to grind," notes exhibition curator Jason Rosenfeld, Ph.D., "came to maturity during the height of the Abstract Expressionist movement, and ended as an American original, pursuing a unique kind of rigorous and emphatically painted abstraction.”

Ben Wilson: From Social Realism to Abstraction is curated by Jason Rosenfeld, Ph.D., Distinguished Chair and Professor of Art History at Marymount Manhattan College, author of John Everett Millais (Phaidon, 2012), co-curator of River Crossings at Olana and Cedar Grove in Hudson and Catskill, New York (2015), Pre-Raphaelites: Victorian Avant-Garde at Tate Britain, the National Gallery in Washington, D.C., and the Pushkin (2012–14), and John Everett Millais at Tate Britain and the Van Gogh Museum (2007–08). He has also published on Marcel Dzama, Stephen Hannock, and Bill Scott, and is a Senior Writer and Editor-at-Large at The Brooklyn Rail. A fully illustrated catalogue with an essay on the artist by Dr. Rosenfeld will be available at the time of the exhibition.

This program is made possible in part by funds from the New Jersey State Council on the Arts and with the generous support of the McMullen Family Foundation.

The George Segal Gallery serves as the flagship facility of the University Art Galleries. Completed in 2006, this state-of-the-art facility houses the permanent collection of works by well-known artist George Segal and other 20th- and 21st-century artists. The gallery has been the recipient of the prestigious Citation of Excellence from the New Jersey State Council on the Arts for three consecutive years.

Montclair State University is a research doctoral institution ranked in the top tier of national universities. Building on a distinguished history dating back to 1908, the University today has 10 colleges and schools that serve more than 21,000 undergraduate and graduate students with more than 300 doctoral, master's and baccalaureate programs. Situated on a beautiful, 252-acre suburban campus just 12 miles from New York City, Montclair State delivers the instructional and research resources of a large public university in a supportive, sophisticated, and diverse academic environment. Learn more at montclair.edu.

Ben Wilson was born in Philadelphia in 1913 to Jewish parents who had emigrated from Kiev and settled in New York City. He was educated in Manhattan public schools and graduated from City College in 1935. To gain exposure to a wider range of styles, he also studied at the National Academy of Design and at the Educational Alliance.

Admired by critics throughout his long career, Wilson was singled out as a “discovery” by the New York Times art critic Edward Alden Jewel even before his first one-man show at the Galerie Neuf in 1946. His paintings of the ’30s and ’40s were expressionistically rendered, often Biblical parables, filled with what he called “the grief of the intolerable” and reflecting an acute awareness of the agony of the time, from the Holocaust to the Spanish Civil War. A WPA artist who identified strongly with the plight of the Jews in Europe, he relentlessly explored themes of war, torment, and futility in his early decades of painting.

When times changed and social pressures subsided, Wilson’s mood lifted. He spent 1952-54 in Paris working at the Academie Julien. During the ’50s his involvement with specific imagery persisted but became more psychological and mythic in orientation. Influenced by Cubism, he created a vocabulary of interlocking shapes and bold, sweeping gestures that served as a transition between his early figurative expressionism and his later abstract constructivist concerns. Towards the end of the decade Wilson reached a crossroads, moving towards abstraction and searching for what he called “a scaffolding under the externals.”

By 1960, influenced by the Russian Constructivists, Mondrian, and Abstract Expressionism, Wilson turned to abstraction. Reexamining the basic elements of painting, he evolved his own personal vocabulary and structure, fusing the cerebral and the emotive. He became increasingly experimental, using house paint, sand, and other unorthodox materials in paintings that he worked from all directions, dripping, spraying, stenciling, and collaging. He employed elements of disjunction, repetitions of geometric motifs, linear networks, and complex overlays to create the transparent, multi-layer development of space that characterizes his later paintings. A consummate draftsman, Wilson filled notebook after notebook with drawings that he amplified in his paintings.

Eschewing popular movements, Wilson was always one to pursue a personal aesthetic. Despite more than 30 one-man shows and 50 years of teaching, he increasingly withdrew from the gallery scene but continued to paint daily until his death at age 88 in 2001 in Blairstown, New Jersey, where he and his sculptor wife Evelyn Wilson lived and worked in their rustic Revolutionary War-era stone house and studio.

As well as in private collections, Wilson’s work is represented in numerous museum and university collections. Montclair State University, in Montclair, New Jersey, permanently houses his art estate and papers, a portion of which is also included in the Smithsonian Archives of American Art.

Other events from Montclair State University