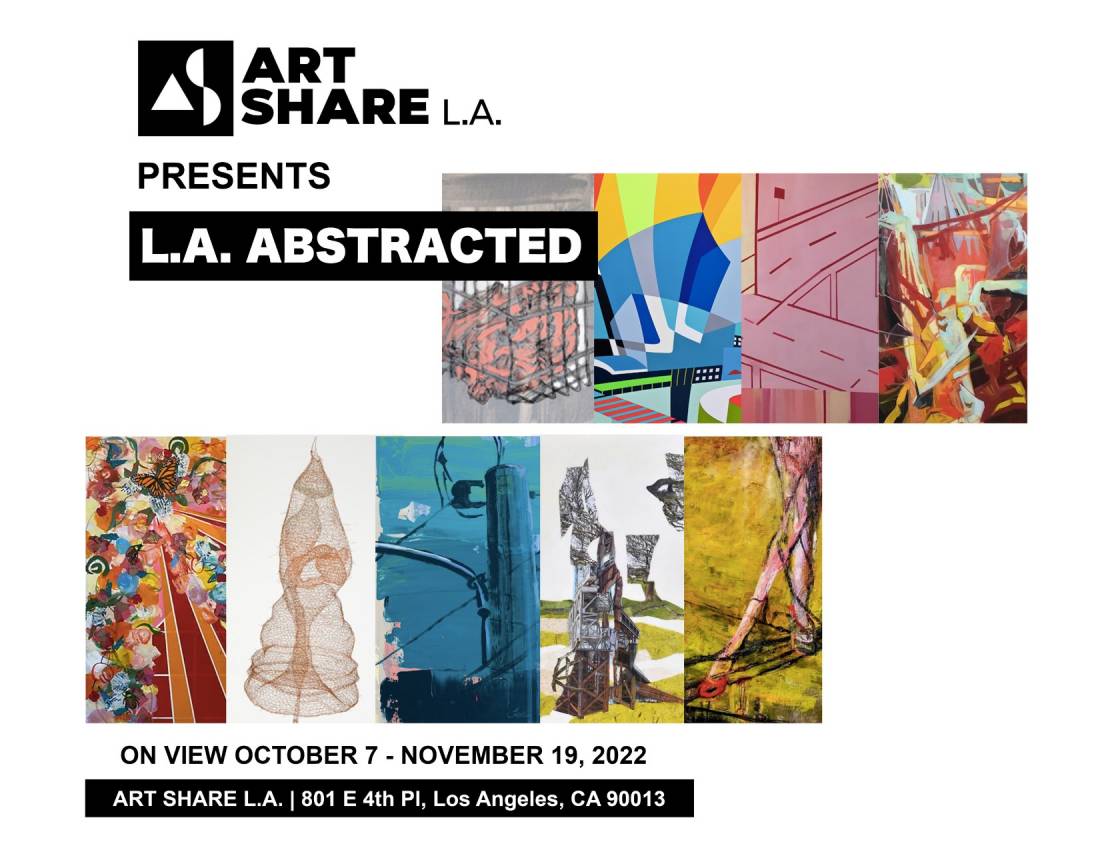 L.A. Abstracted explores Los Angeles through a range of abstractionists whose artwork conveys the complexity of the urban environment. The exhibition will feature 25 artworks including painting, sculpture, and mixed-media works.

Artworks will be available for acquisition online starting October 7th.

Born in Beigang, Taiwan, Chen has lived and worked in Taipei, Taiwan, New York, N.Y., and Los Angeles, CA. During a couple of residencies and international traveling experiences, Chen is situating herself between cultures and expressing herself from a global perspective.

She received a BA from the Chinese Cultural University, Taipei, Taiwan and a MFA at the School of Visual Arts in New York City where she studied with Michael Singer, Ursula von Rydingsvard and Jackie Winsor, etc. And their engagements with architecture, wood and uncommon materials in contemporary discourse influenced her experimenting with the possibility of space and materials, including wires and electrical cables.

Jessus Hernandez is an LA based artist that merges geometry with the beauty of cityscapes in a multi-dimensional world filled with color. His work simplifies the complexities of city life by converging flat shapes and perspective to create geometric abstract compositions.

By utilizing acrylics and aerosol paints, he has developed a painting technique where he skillfully creates clean lines and winding circular shapes that give his artwork a three dimensional futuristic quality. Through his commitment to detail and command of strong colors, he draws the eye of the viewer to his architectural perspective to reveal dimension, shadows, and the overall depth of his works.

You can find Hernandez’s numerous commissioned artworks and murals in public and private collections such as the Paypal Headquarters. He has also exhibited his works in multiple galleries in the U.S. and Europe and was a featured artist in the CONTEXT Art Fair in Miami Art Week 2018 and 2019 and in the L.A ART SHOW 2020 ZIN Los Angeles.

Teale Hatheway is a Los Angeles based artist known for her paintings and installations of architecture, street lights and ornamental details. Her work contemplates ideas of memory, experience and the soulful residue left behind as people inhabit, use and pass-through physical spaces. Hatheway uses the visual languages of the built environment, color and pattern to suggest the depth and complexity of the life of the city. Her paintings entice viewers to unplug and tune into the tangible history surrounding them.

Kiara Aileen Machado is a contemporary artist born in Lynwood who depicts and explores the construction and freedom of identity, femininity, and culture in her work. She obtained her bachelor’s degree in painting and drawing from California State University Long Beach. Her artwork has been seen in museums across the United States, including the South Gate Museum (California), Buckham Gallery (Michigan), Dupont Underground (Washington DC), John & Geraldine Lilley Museum (Nevada), Stamp Gallery (Maryland), Frederic Jameson Gallery (North Carolina), and recently at Band of Vices (California) as part of the 'In the Paint' art initiative headed by the Los Angeles Lakers to identify and support contemporary LA-based artists. She has recently exhibited work internationally in Frankfurt, Berlin, and Paris.

Caley O'Dwyer "My artwork comes from many different interests but I am particularly drawn to people, urban life, and the areas inside us where the heart and the mind merge. I’m drawn to human tenderness and goodwill. I love color, lines, shape, and intersections between digital and handmade art. My paintings often start from photographs or digital work that is rendered in oil or acrylic or both and pieces started on canvas are frequently figured digitally and reworked, in a process of back and forth between the digital and the real."

Based in Los Angeles, Gunlock has received an MFA at California State University, Long Beach in 2003. A 2022 recipient of the Pollock-Krasner Foundation grant, she has exhibited nationally and in local venues such as Sturt Haaga Gallery at Descanso Gardens, Los Angeles Municipal Art Gallery, Launch LA, and Angels Gate Cultural Center. She has been Artist in Residence at Cill Rialaig Project in Ireland; Playa in Summer Lake, Oregon; Brush Creek Foundation for the Arts in Saratoga, Wyoming; and Shoebox Projects in Los Angeles, Pennsylvania, among others.

Essi Zimm "My biological father, a religious fanatic, claimed to know the truth. A woman’s value could be precisely calculated according to metrics of surface: dress, speech, piety, observance. My mother, a free spirited German, claimed her own truth. Beyond surface, there were things that dictated an individual’s fate: signs, symbols, curses, miracles. Being raised in a bookstore, I was imbued with many truths from the local UFO hunters, the psychics, the paranoid philosophers, the zealots, the hippies, all fervently declaring the objective truth to be found in their recommended codexes. These books were the saving graces of my childhood. With no other children around, I befriended the books and they became a catalyst to how I related to everything and everyone. They became my myriad of axioms. Folklore is the human attempt to pass on these truths. Henry Glassie said it best, “it stresses the interdependence of the personal, the social; the aesthetic, the ethical, the cosmological; the beautiful, the good, the true. Practically, folklore is the study of human creativity in its own context.” My art can be summed up as confessions of paper, a way to visually communicate truths, accessing the space occupied by folklore. Paper conceals and communicates meaning, and can be destroyed and overlaid in various modes. I begin a piece by abstractly representing an image in paint, which I then cover with paper: scraps found, created from pulp, or hand illustrated. I then peel away the paper, leaving a construction bearing a nonlinear but viscerally personal connection to its origin. The accumulated papers mimic the debris that sticks to memories; it mirrors waking life’s uncanny transfiguration in our dreams. Where realism trusts only what can be tested and seen, folklore presents a world vibrating with meaning, a morally charged and heavily fated universe that rejects logic in favor of the non-linear."

Stephanie Sherwood is an artist and curator living in Los Angeles. Her artwork has been shown internationally and in the United States, including the Los Angeles Municipal Art Gallery, LA Artcore, The Brand Library and Art Center and DAC Gallery. Sherwood’s work and curatorial projects have been included in several publications including Artillery, Art and Cake, ArtHabens Contemporary Art Review, LA Weekly, Murze Magazine and Voyage LA.