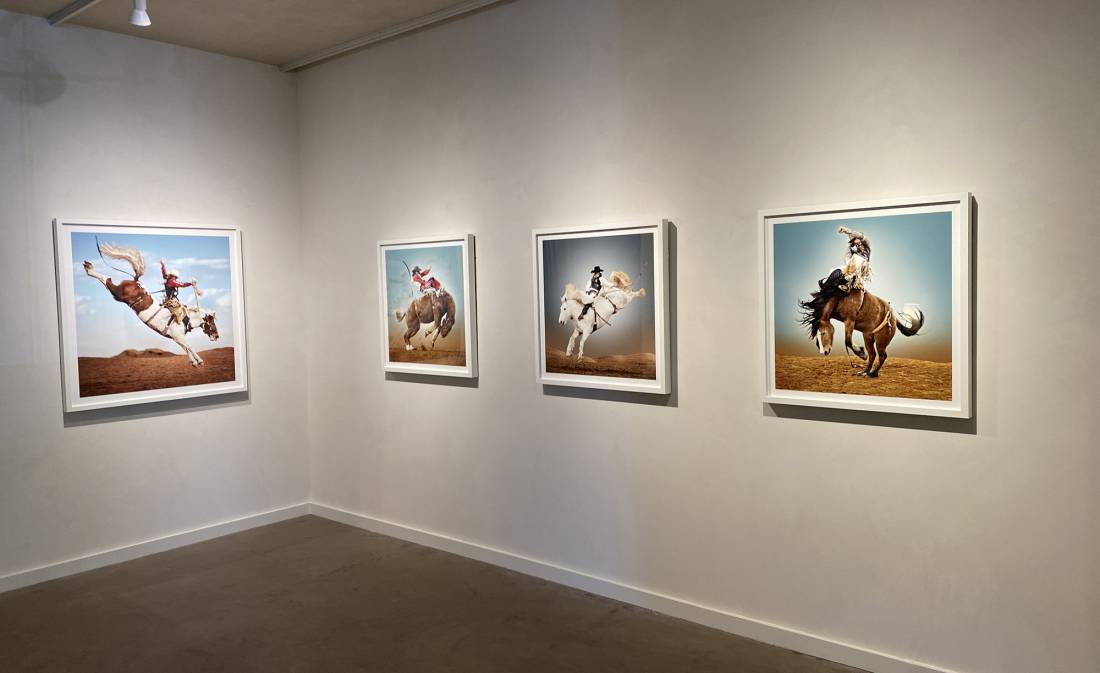 Photographer Steve Wrubel’s "Rodeo" series exposes a fleeting, frozen second between rider and animal. Focusing on bucking broncos and bulls, Wrubel removes often-chaotic context of the arena.  We are left with an instant that exposes a synchronized duet that is both violent and beautiful. These graphic, intimate, and gritty images expand on the canon of the American West. After 25 years in commercial and fine art photography, Wrubel made a move to focus solely on creating art that reflects what he loves – The West.

In his RODEO series, Wrubel uses graphic and technological techniques to stop the action of those on horse or bull riding - so the audience can see the beautiful dance that until now has remained hidden in the raucous nature of the sport.

By taking away visually distracting backgrounds, Wrubel’s work invites the viewer to focus clearly on the finer and often unseen details of his subjects, offering a deeper story of what is going on in the split second that his images were created. Steve’s bold compositions and soft but vibrant and complementary color palettes coax in - the most seasoned eye to behold the timelessness of these photographs thus creating new icons of the American West

The competitive equestrian sport that we all recognized as Rodeo arose out of the working practices of cattle herding in Spain and Mexico. Today, it is a sporting event that involves horses and other livestock, designed to test the skill and speed of the cowboys and cowgirls. American style professional rodeos generally comprise several events such us saddle bronc riding, bareback bronc riding, bull riding and barrel racing. Most of Steve series focuses on bronc and bull riding, a rodeo event that involves a rodeo participant riding a bucking horse (sometimes called a bronc or bronco) or a bull that attempts to throw or buck off the rider. The rider attempts to stay on the horse for eight seconds without touching the horse or bull with their free hand. Bronc riding is now a highly stylized competition that utilizes horses that often are specially bred for strength, agility, and bucking ability.

Since his first inspiration to jump into the world of rodeo photography in the summer of 2019, Wrubel has put over 30,000 miles on his Pickup truck.  Criss crossing the western states in search of dynamic rodeo moments, he has been to rodeos and ranches in Texas, New Mexico, Oklahoma, Kansas, Colorado, Wyoming, Utah and Montana. His drive to dive further and further into the culture and the experience of the American Rodeo and Western Culture has allowed him access to the rare air of rodeo photography in events such as The American, The Riggin’ Rally, The NFR, The Gold Buckle Knockout at the Cervi Ranch and even  buck up practices at the occasional private ranch.

Wrubel explains: “Finding a way to get in the dirt without getting in the way, and not getting run over by a 1500 pound wild horse is all part of the chase, the excitement and what takes to become a part of the image.  To really feel and become a part of the energy and chaos and turn it in to a split second representation of that amazing dance between man and beast.”

Wrubel has exhibited in solo shows in San Francisco, Boston, Santa Fe, Aspen, Dallas and in Los Angeles in 2021 at Maxwell Alexander Gallery. He is represented by Christopher Martin Gallery of Aspen and Dallas, and Tierra Mar Gallery of Santa Fe.