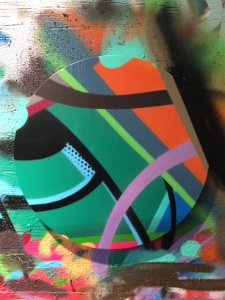 Iconic, sleek and smooth, the visual style of John “CRASH” Matos resounds with a singular, signature vibrancy. Throughout his almost four decade career, CRASH’s work has engaged with environments on a huge scale - ranging from his early murals on the sides of NYC subway trains in the 70’s, to more recent projects such as a large mural commission at Miami’s Hard Rock Football Stadium. JoAnne Artman Gallery is pleased to present the artist’s new body of work that continues this conversation around scope, scale, and environment, through a continued exploration of the spray paint medium.

CRASH’s radiant, fluorescent palette cements his work firmly in the present as the artist works within a dialogue culled from classic pop culture, comic book and print references. A frequent collaborator, CRASH’s process is rooted within his identity as a Bronx-born graffiti artist, having come of age in the hip-hop fueled Bronx of the late 1970s. His distinct style made him an iconic part of the NYC visual landscape, while also pioneering a new age for graffiti in 1980 when he curated the pivotal “Graffiti Art Success for America” exhibition at Fashion MODA. In his new work he widens the scope in a gestural exploration of form and shape, with a continuously unfolding narrative that plays out over each surface, barely contained to the planes of the canvas.

Whether on city streets or gallery walls, concrete or canvas, CRASH’s works are instantly recognizable. Continuously engaged in various projects and commissions his work is also part of numerous museum shows, with works in many permanent museum collections such as the Museum of Modern Art (New York), Brooklyn Museum (New York), Scottsdale Museum of Contemporary Art (Scottsdale), and Stedeljik Museum (Amsterdam).

Born John Matos in 1961, CRASH was raised in the Bronx, New York. At the age of 13, he began following the older teens from his neighborhood to the train yards and began bombing. Taking the name “CRASH” after he accidentally crashed the computer in his school, his name began appearing on trains circulating all throughout New York City. By 1980, he began transitioning from train yards to galleries. He curated the groundbreaking "Graffiti Art Success for America" at Fashion MODA, launching the graffiti movement that has remained very active through today. CRASH’s career took off and he saw instant popularity throughout Europe and America, and eventually Asia. CRASH has been part of numerous museum and gallery shows around the world focusing on Graffiti and Street Art, and has works in many permanent museum collections. Visually iconic, he has partnered with many companies for projects including Absolut Vodka, Fender Guitars, SoBella Handbags, Levi’s, and most recently, Tumi luggage and Morphik. He continues to work and show both locally and internationally. Enjoy the awe and power of CRASH!