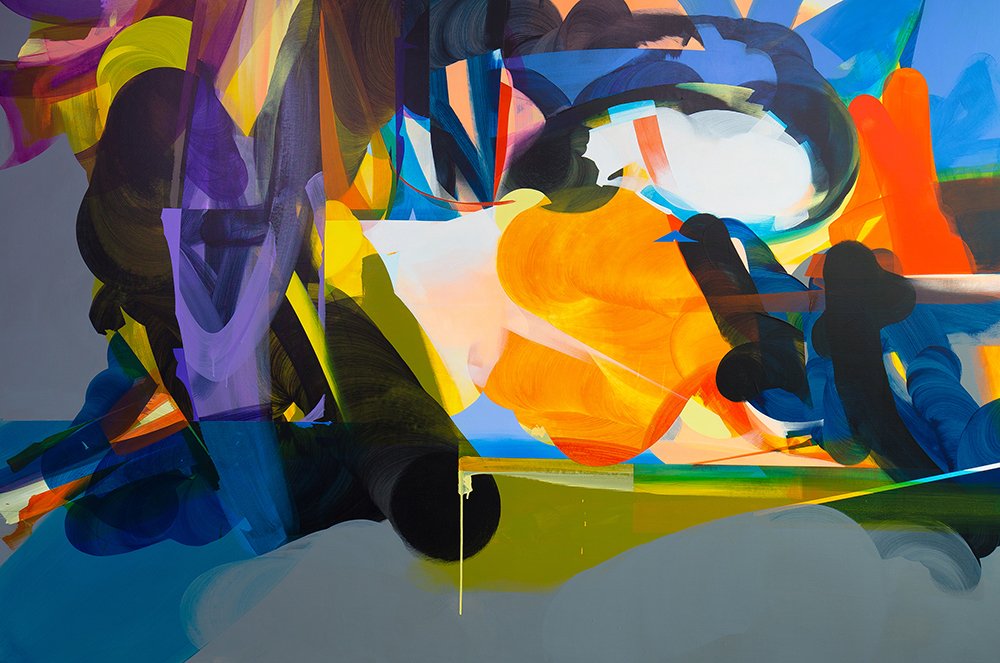 Mirus Gallery Denver is pleased to present L’Avenir, a Graffuturism group exhibition curated by Poesia. The opening reception will be Friday, April 26th, VIP/Press Opening 5:30-7 PM then general admission from 7-10 pm, and the exhibition is free and open to the public for viewing through May 25th, 2019.

“In general, I try and distinguish between what one calls the Future and “l’avenir” [the ‘to come]. The future is that which – tomorrow, later, next century – will be. There is a future which is predictable, programmed, scheduled, foreseeable. But there is a future, l’avenir (to come) which refers to someone who comes whose arrival is totally unexpected. For me, that is the real future. That which is totally unpredictable. The Other who comes without my being able to anticipate their arrival. So if there is a real future, beyond the other known future, it is l’avenir in that it is the coming of the Other when I am completely unable to foresee their arrival.”― Jacques Derrida

L’Avenir features a group of like-minded artists that flourish under the banner of Graffuturism, a term coined by artist and arts commentator Poesia, who edits and publishes an online blog under the same name, Graffuturism.com.

Taking inspiration from French philosopher Jacques Derrida and his axiom The coming of the Other, L’Avenir literally translates as “the future,” and is a direct reference to the progressive and contemporary element that has influenced this intercontinental group of individuals known for creating a distinct aesthetic of their own.

L’Avenir brings this group of graffiti inspired contemporary artists crashing into our visual field with an exciting celebration of the neo-contemporary Graffuturism movement.

Graffiti/Urban Art has flourished and established itself in the contemporary art scene over the past decades, yet it remains a relatively new art form in the historical sense. In 2010 I started a blog that set out to showcase the work of fellow Graffiti/Urban Artists who I felt were underrepresented. I had witnessed a gap in how the art media had been covering our art form: one side being about the new street art, and the other about traditional graffiti coverage. There was no middle ground or coverage of graffiti artists who had pushed forward to explore progressive hybrid directions, or about the newer street artists who worked more like graffiti artists.

Being a graffiti artist myself, I was able to tell a different story from a new perspective through the blog. This is where Graffuturism started and established itself as an alternative to what was taking place in the Graffiti/Urban Art media. What I didn’t expect was that the blog would strike a chord with fellow artists from around the world, and that we would go on to establish one of the most organized international groups of artists within the larger Graffiti/Urban Art scene. Graffuturism is composed of an emerging progressive global art form that in its natural environment on urban streets around the world has far surpassed any recent contemporary art form. While other art movements or groupings may have taken place due to common theory, ideas, schools, or location, Graffuturismhas utilized social media and the internet to connect and assemble through a common interest in this new progressive Graffiti/Urban Art.

What started out as a blog has now become something larger. The term might imply a movement by utilizing the ism in its name, and also reference Futurism within its title, but it had no intention of either being an art movement in the modernist sense of the word nor is it based on futurist principles. This doesn’t mean that Graffuturism does not share certain characteristics of an art movement or deny the fact that some of the artists reference futurism aesthetically in their work. Graffuturism is just another word. The real power of our art form is in our actions as artists collectively.

We don’t set out to define where we stand in today’s lexicon of art terms, instead we offer proof of our existence with our work. Our art form was born out of the need to express ourselves through art and aesthetics in the urban streets. L’Avenir is an exhibition curated by myself that calls into question what is already here, but more importantly what to “is to come”. In this current exhibition at Mirus Gallery we set out to showcase a group of artists that have been part of Graffuturism over the past Nine years in some form, and bring together a wide range of aesthetics that exemplify the essence of this neo-contemporary movement Graffuturism, and also to explore where this movement is heading. With a list of artists that include historical figures within the culture such as Doze Green to rising contemporaries such as Augustine Kofie “La Avenir” sets out to capture an aesthetic, conceptual, and international range of artists that exemplify this moment and movement.

We are at a special time and moment in our art form. We are embraced by the mainstream and are able to engage the public like no other form of contemporary art, yet we remain outside of the academia so to speak. What once was avant-garde now caters to a small group of pseudo intellectuals that push theory over practice in most cases in our current art world. By secluding themselves from the mainstream through a form of elitism, it has opened a gap allowing other subcultures and art forms to grab the public’s attention. Graffiti was born in the 1960s and is thus coincidentally post-historical in nature. Graffiti developed as a subculture that manifested outside of the institutional fine art historical narrative, bursting onto the cultural stage with its own set of rules and established its own concepts and aesthetics.

We were all born from this initial moment forty-plus years ago, and are starting to utilize this personal history to fuse with influences from outside of our art form. This break from many of the traditional elements of graffiti started at about the same time Street Art emerged as a bubble of renewed cultural interest in the early 2000’s. Because Street Art was able to garner a large following due to its use of representational imagery and readable text, a Graffiti/Urban Art hybrid started to form as younger artists utilized aesthetics from all categories of art on the street, as well as historical forms. There has always been exceptions to this rule, and those artists who were able to see this sooner than others. Progressive hybridization of graffiti has a history going back to the 1970s with artists such as Futura and Rammellzee, yet todays progression is taking place on a much larger scale.

This brings us to today and the advent of L’Avenir. This new stage of our development is taking shape at the same time the art world is starting to take notice. Yet with limited knowledge of our subculture, they the art world has had a hard time acknowledging us as an art form. There have been some exceptions, but as a whole we have stood “outside the gates” so to speak. We are on the fringe, at the precipice of being recognized, still fresh enough to have honesty prevalent in the work before over-commercialization takes hold.

When I set out to write this statement, I thought through my research in art history I would find answers through a scholarly avenue in order to explain our situation and relationship to the art world. The more I read I understood we had no real relationship, that was the moment I realized that was and is the relationship. We stand outside, both academically and literally, we stand in the streets en plein air, not contained in a museum. Our work, our masterpieces are under layers of buff – and are eradicated daily across the world. Since 2010, when Graffuturism was established, there have been many changes, as have our intentions as a group (if we were to say we ever had intentions). As a group now, what was once just an idea has formed into a network of artists spread across the globe, each influenced by their own circumstances and inspiration, yet bound by a common history. The dialogue we engage in is a conversation across continents and the language we speak consists of skyscraper-size paintings, to work in the studio which are experienced in person by globe hopping artists, as well as through digitally translated photos broadcast around the world through the internet. We are a network existing outside the market, based in obsession and love of graffiti and everything that it means.

Through Graffuturism we have found a base to have this conversation amongst each other. We move forward with or without the acceptance of academia, engaging the world the only way we know how – through our work in the streets and in the studio. The latter engages an older system of art with a structure much different than the art we create on the streets for ourselves and the public. Without the context of our street work, our studio work would seem impure, dishonest, out of place and out of context.

We will not tell you how to engage with our art. We only ask you to look further than the canvas. Set your gaze upon the whole rather than the constituent parts and acknowledge what is to come – L’Avenir in the past, present and future tense.