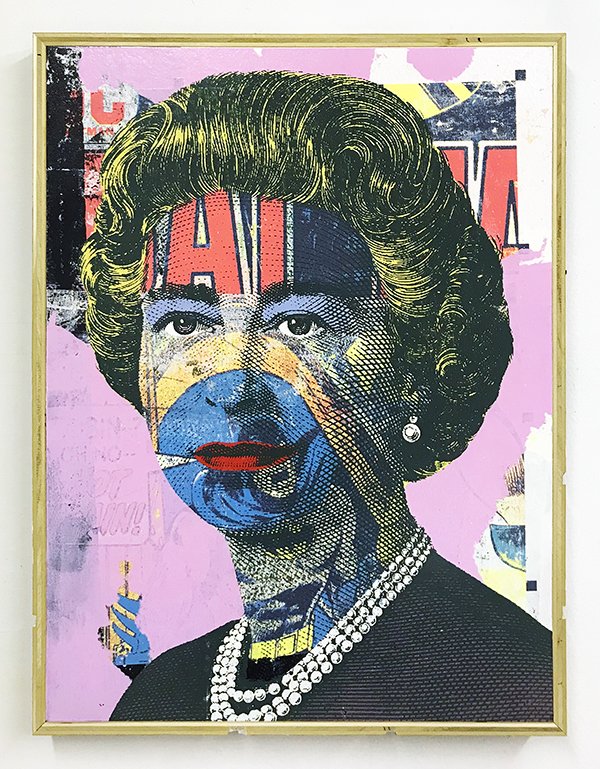 Herakut is a German street artist duo. Hera (Jasmin Siddiqui) and Akut’s (Falk Lehmann) joint creative art process is about storytelling, the creation of imaginary worlds and inspiring their figures with individual characters. Hera sets the characters’ form and proportions, whilst Akut paints the photorealistic elements. They have murals and have exhibited around the world.

Collin van der Sluijs is from Maastricht, Netherlands. He is widely recognized for his extraordinary dream-like depictions of everyday stories that question our personal pleasures and struggles, as well as society at large.

John Wentz is from San Francisco, California. Working within the classical idiom of the human figure, his goal is to reduce and simplify the image to its core fundamentals: composition, color, and mark making.

Sepe (Michał Wręga) lives and works in Warsaw, Poland as a freelance graphic designer, painter, and illustrator. Inspired by his college studies at The Academy of Fine Arts, Lodz, he mixes narrative illustrations with modern, vector elements and abstract compositions.

Rodrigo Branco is a Brazilian artist who began his career in the urban art scene of São Paulo. During his teens he discovered the world of graffiti. He began painting murals on the streets of São Paulo portraying strange clownish, and emotional faces that reflect his childhood visions.

Greg Gossel is from Western Wisconsin and currently resides in Minneapolis. Gossel’s multi-layered work illustrates a visual history of change and process that simultaneously features and condemns popular culture.

Pam Glew is from Brighton, England. She is known for her unique bleaching technique on fabric. She specializes in portraiture and paints using bleach on dyed vintage textiles to create captivating faces that emerge subtly from the darkness.

Super A is a Dutch street and gallery artist from Goes, Netherlands. He blends urban methods, graphic design and traditional painting techniques to give life to work that evolves out of his personal experiences and thoughts.

Sickboy emerged from Bristol’s infamous graffiti scene and his work has cemented his place in the upper echelons of the British street art movement. Sickboy has exhibited around the world, and his work has featured in numerous graffiti books and documentary films including Banksy’s Oscar-nominated Exit Through the Gift Shop.

Belgian artist, Philip Bosmans is a self-taught painter and graffiti/street artist who creates his work to represent and characterize people's dreams, grief, happiness, or luck. He gives the spectator the possibility to disappear from daily life for a moment by looking at his works that carry a strong use of color and imagination.

London-based artist duo STATIC are made up of friends Tom Jackson and Craig Evans who since 2006 have been producing bold original work abstractly exploring duality and conflict through figurative assemblages. Their process involves image manipulation and digital creation which is then either cut as a stencil or made into a silkscreen. With elements of street art and fine art, Static creates unique pieces which have been exhibited worldwide.

Born in Mexico, but raised in Colombia, Stinkfish is one of the world’s best-known and prolific street artists. He has been honing his skills on the streets of his hometown of Bogota since an early age. Known for his portrait murals that are always bursting with color, his transposition of photo to mural enhances the fleeting glimpse of human nature he has captured, leaving the final interpretation up to the public.

Chicago native, Joseph Renda Jr. is intrigued with unifying contrary ideas such as life and entropy, chaos and order and nature and mankind. While Integrating stylistic approaches from classicism, abstraction and urban contemporary art, Joseph utilizes urban materials such as spray-paint with traditional oil painting mediums and techniques.

Brad Novak is a New Zealand-based urban pop artist whose work sits sharply at the nexus between fine art and street art. His one-of-a-kind, hand-collaged and stencil-spray-painted works involve the layering of popular imagery.

Chadwick, from Chicago and currently residing in Los Angeles, started painting as a live performance artist. His mixed-media abstract portraits have caught the eye of collectors around the world. Chadwick is also musician and helped found the music collective known as The Streets on Fire.

Elmo Hood is one of the most promising and exciting painters to arrive on the art scene in recent years. Working in portraiture, painting free hand and with stencils, Elmo has been able to create a unique and colorful style by combining spray paint and acrylic. His work fuses pop and graffiti art in a way that is consistently turning heads in the art world.