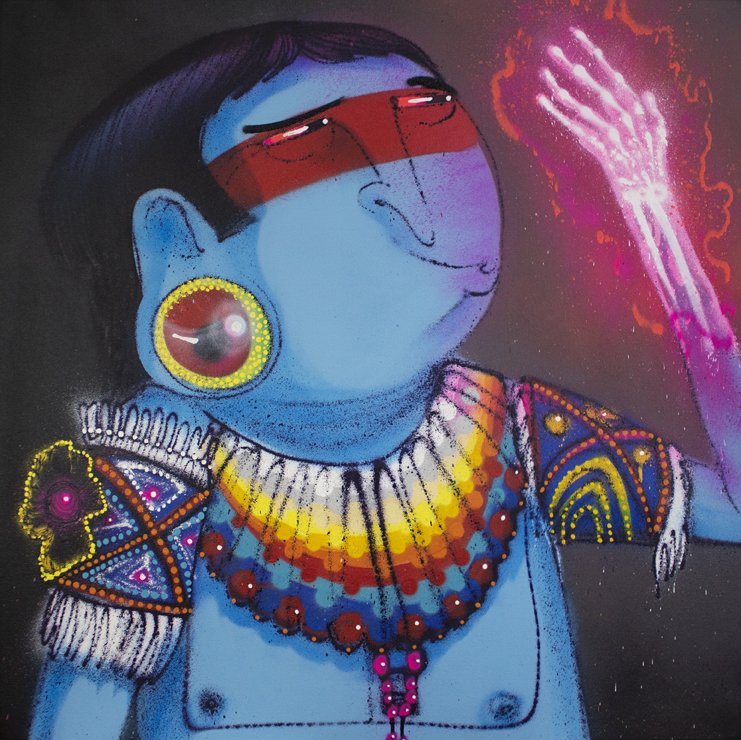 Vertical Gallery presents Cranio “Jungle”. In his first solo exhibition in Chicago, the artist will feature an all new collection of paintings and drawings. The exhibition is August 4 – 25, with an opening reception with the artist on Saturday, August 4th, 6:00-10:00pm.

Fabio de Oliveira Parnaiba, also known as Cranio, is a pop-contemporary street artist who lives and works in his hometown São Paulo, Brazil. As a self-taught artist, he hit the streets in 1998 writing his name on the bland city walls. It wasn’t long until he started drawing characters that gave a bit of humor to the grayness of his surroundings.

Cranio’s work is described as a mix of street and fine art, where he depicts his own life and current world issues as the foundation of his timeless pieces. He isn’t afraid to take on controversial topics like political corruption, consumerism and environmental disaster.

Cranio’s blue Indian characters have become his trademark – the characters represent the indigenous people of Brazil and the troubles they face living in a contemporary world. He hopes combining the spiritual blue Indians and new world issues will force people to think about our own self and the society we live in. Tackling tough issues, Cranio knows the importance of adding humor to his artwork without losing the significance of his original message.

Cranio’s international following has exploded thanks to his iconic murals in cities across the globe. The demand for his work continues to skyrocket as he establishes himself as one of the world’s biggest pop-contemporary artists.