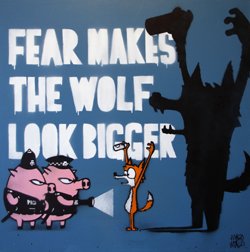 Vertical Gallery is proud to present a new collection of work from Beejoir and Mau Mau. The exhibition "Foreign Policy" is July 8 - 29, with an opening reception with the artists on Saturday, July 8, 6:00-10:00pm.

Mau Mau and Beejoir are long-term friends that have collaborated on projects together for over a decade. This is there first collaborative show in the United States.

“Foreign Policy” is a body of work incorporating both artists passion for strong social/political artworks, drawing from their own lives as well as the fast moving political turmoil  surrounding us all in today’s world. The exhibition features a broad spectrum of works on canvas, digital, bronze and oil. Both artists are showing previously unseen works as well as a few well known classics.

Mau Mau is a renowned British urban graffiti artist who’s gained an international following with his humorous street, print and graffiti work. He incorporates political, environmental and cultural commentary to his work – often with his trademark character of a mischievous and fun loving Fox. With roots planted in surf and country vibes of the North Devon coast, Mau Mau brings an air of rural sophistication to the art he has been creating for twenty years. He has painted his way around the world, his artwork appearing on everything from shipwrecks to surfboards and billboards to city walls.

Mau Mau has produced work for World Land Trust, Greenpeace, Surfers Against Sewage and the Glastonbury Festival, and for record companies such as Ninja Tunes and Lowlife Records. He is the architect of cult brands Sewerside Boardwear and Fear Trade. His street work can also been seen all over the world including the UK, Jamaica, Thailand and Australia.

Beejoir was born in the UK and currently resides between Tokyo and Bangkok. Using varied practice's and methods of installation, sculpture, painting, spray painting and drawing, Beejoir explores modern society, conveying the way in which he sees the changing world around him and where he sees it heading. He is known for his irreverent work that is both provocative and powerful.

Beejoir has successfully shown, curated and exhibited in over 70 solo and group shows across the world in some of the leading private galleries, institutions and auction houses. His work is collected by hip hop artists, celebrities and members of the royal family and has been featured in sell-out shows throughout the world. Beejoir has also been featured in several publications, including being recognized in 'Beyond the Street’ as one the world’s 100 leading figures in street art. He has also spent over 10 years growing the careers of like-minded artists with his company Souled Out Studios.