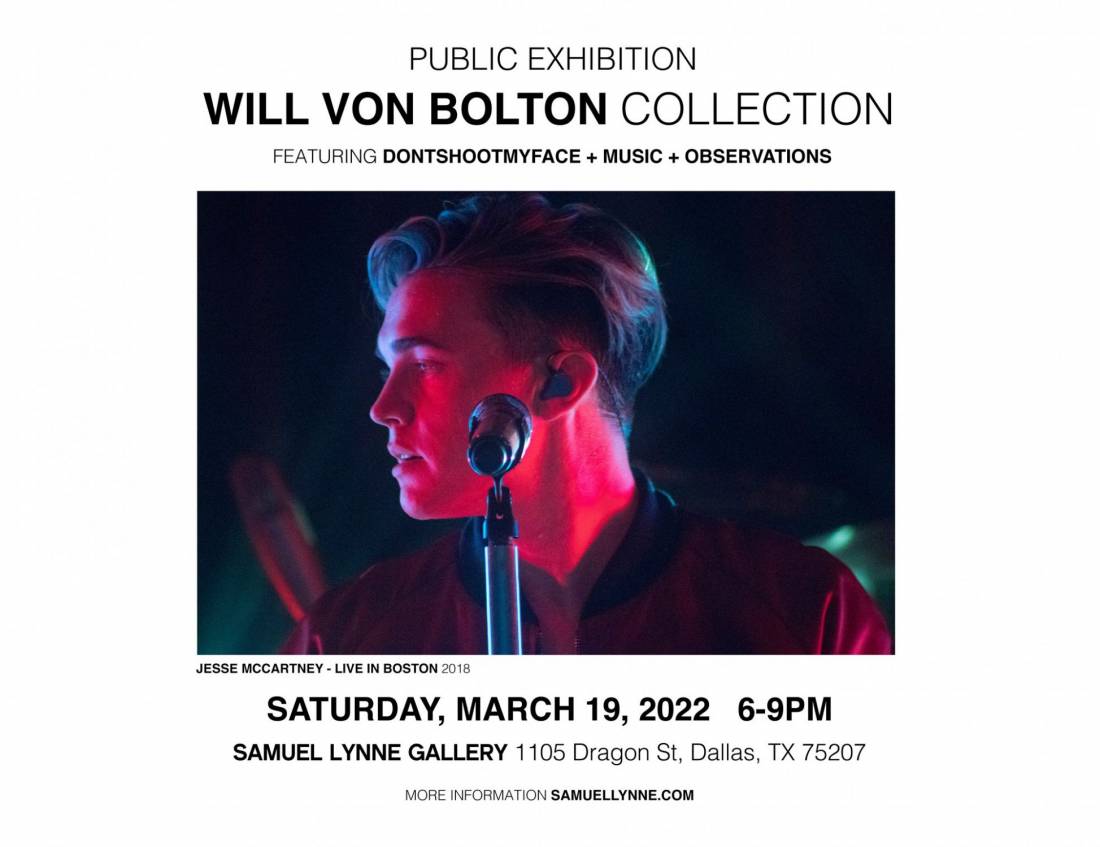 Dallas-based photographer, Will von Bolton, will host a showcase of his photography work spanning through 15 years of his career.

The exhibition will feature music photographs of Leon Bridges, Jesse McCartney, Paul Cauthen, Ross Lynch, Minxie Mimieux, and Bolton’s anonymous nude project called “DONTSHOOTMYFACE”. In addition to this, he will perform a Live photoshoot with Roxanna Redfoot, which will be sponsored by Innovation Villas. Open to the public and sponsored by Roxor Gin

Will von Bolton grew up in Belton, Texas, and moved to Dallas in 2001 after he began playing drums in a band. After he realized he loved music culture, but not performing, Bolton began photographing friends in his studio and started touring in 2009. Bolton has toured 38 countries and has worked with Jonathan Tyler and the Northern Lights, R5, Jesse McCartney, Bowling for Soup, Electric Touch, Blue October, The Roomsounds, Paul Cauthen, Leon Bridges, Gary Clark Jr., and many others.

Bolton specializes in capturing human interaction, intimate portraits, storytelling, and documenting people from all walks of life. His main goal is to be able to inspire or help others as he pursues the potential of photography and the journey of Becoming Conscious.
Known also for his artistic and bold nude photography, Bolton’s work stands out by the unique relationships the photographer develops with his subjects and the “phototherapy” approach of all of his shoots.

“I have always felt I had an eye for photography and began professionally shooting with a publishing company when I was 21,” says Bolton. “My transition into photography from music felt easy, as I took pictures of my friends. The next thing I know it is 15 years later, and I have a collection of extraordinary life experiences because of the camera."

Will began music photography in 2009 touring with Jonathan Tyler and the Northern Lights who were opening for Kid Rock and Lynyrd Skynyrd. He has since toured 38 countries and worked with well-known artists including; R5 (The Driver Era), Jesse McCartney, Bowling for Soup, Electric Touch, Blue October, The Roomsounds, Paul Cauthen, Leon Bridges and many others.

DONTSHOOTMYFACE is an anonymous nude study that embodies the spirit of a modern renaissance. It is a first principle nude study celebrating beauty and design of the female form. Without the face, the viewer reflects more of their own perspective.