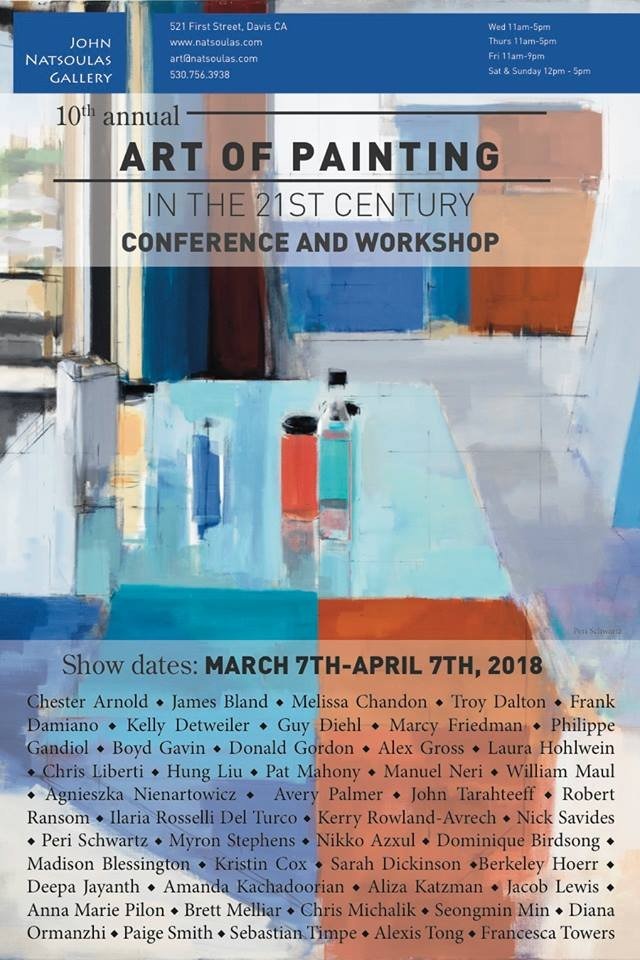 The Art of Painting in the 21st Century is an annual conference, in its tenth year, and is geared towards nurturing dialog on contemporary painting and the shared ideas that define current trends in the field. Many painters work alone, an isolated process that deprives the artist of thriving debate until the work is shown. This year’s conference will feature some of the most talented and well known painters working today. We are proud to be featuring world renown painters Chester Arnold, Alex Gross, Hung Liu and Peri Schwartz.

Students who register online here are free and non-students must purchase ticketshttps://www.eventbrite.com/e/10th-annual-art-of-painting-in-the-21st-century-conference-tickets-41852507978 . The prices will increase after March 14, 2018.

In an intimate setting, interact with top artists in a way not possible elsewhere. UC Davis, home to artist Roy de Forest, Roland Peterson, Wayne Thiebaud, and Robert Arneson, was instrumental in defining a new direction for a uniquely West Coast style. Nowhere else in the country will the participant be able to interact and discuss the purity of painting in one place. Meet face-to- face with distinguished artists you might only otherwise read about. This year, a collegiate exhibition of the top 20 young college student painters will be on display. Many awards will be given to these young artists because they are the future painting. Peri Schwartz is from New York and works with abstraction from carefully curated still lifes. Chester Arnold spent his formative years in Germany which influenced his art making to
center around ideas of perspective. Finally, Alex Gross; “His respect for the past, his intelligent sympathy for the alien, and his manifest love for his craft have made him very much an artist of our time”-Bruce Sterling, Los Angeles Times. Alex Gross is from New York and is
currently in L.A. but is heavily influenced by the history of Japanese art. These three artists have unique perspectives and approaches to their professional work. The conferences goal is to provide these varying perspectives and allow interaction between young students and
professionals in the field, fostering the strong tradition of painting and culture in the Northern California region through exposure and discussion.

The 10th Annual Art of Painting in the 21st Century Conference was funded in part by a grant from the City of Davis and The Yolo Visitors Bureau  .

Born in Santa Monica, California in 1952, Chester Arnold spent his formative years in Germany where he studied at Private Teachers in Munich.  In the early ‘70s, Chester returned to California and studied at College of Marin in Kentfield, California before earning his MFA from San Francisco Art Institute.

Chester’s time in Germany exposed him to a European sensibility toward the arts; it was also where he absorbed the deep questions and self-examination that pervaded German culture during those years. He says “I was really attracted to northern Renaissance artists, especially Albrecht Durer, from early on — I’d say from the eighth grade…I saw the possibility of engaging much more deeply, of making art that is reverential in the way that Durer is, and at the same time, woven with the creativity in the individual.” Arnold’s paintings touch on the “inconsequentially of humankind,” and ideas of perspective, which often comes from an imaginary place.

Arnold’s exhibition history includes Donald Kuspit’s selection of his work for New Old Masters at the National Museum in Poland in 2006, and a major solo exhibition at the San Jose Museum of Art.

Alex Gross lives in Los Angeles, California. In 1990, he received a BFA with honors from Art Center College of Design in Pasadena. Since then, he has had nine solo exhibitions at various galleries, and participated in dozens of museum and gallery exhibitions across the globe. His 2017 exhibition with Corey Helford Gallery will be his tenth solo exhibition.

In the summer of 2007, Alex’s first retrospective museum show was held at the Grand Central Art Center in Santa Ana, California. Alex is a recipient of the prestigious Artist’s Fellowship from the Japan Foundation, and several faculty grants from Art Center College of Design, where he taught from 1994 to 2005.

Antisocial Network is Alex’s first exhibition with Corey Helford Gallery, and the first time he has shown in Los Angeles in over a decade. The exhibition will contain about twenty full size paintings, several drawings, and over a dozen new cabinet card paintings.

Peri Schwartz is not exactly a still life painter. She builds abstractions out of real forms. The objects do not inform the work as much as the artist informs the objects. Schwartz does not merely paint or draw what she sees; she first creates what she wants to see until it is there, and then she puts brush to canvas, charcoal to paper. She uses glass bottles filled with colored oils for their translucency and layers these vessels in front of each other until the desired hue or opacity emerges, and then she paints it. If she knows she wants a particular shot of color in her work, she will bring it in. She will physically paint an object the color she wants and work it into her composition if needed.

The work is rigorously formal yet never stiff; the surfaces have a loose brushwork and casual air that make them very inviting. The steely charcoal and ink drawings on Mylar are bold and almost architectural. Drawn with a confident stroke, towers of books lean on and support each other; traces of grid marks define the picture plane, and then disappear – forcing the eye to jump to the next landing spot. The drawings are punctuated with dark and light shifts that keep the gaze zipping back and forth

Hung Liu was born in Changchun, China in 1948, growing up under the Maoist regime. Initially trained in the Socialist Realist style, Liu studied mural painting as a graduate student at the Central Academy of Fine Art in Beijing, before immigrating to the US in 1984 to attend the University of California, San Diego, where she studied under Allan Kaprow, the American originator of Happenings.

Known for paintings based on historical Chinese photographs, Hung Liu’s subjects over the years have been prostitutes, refugees, street performers, soldiers, laborers, and prisoners, among others. As a painter, Liu challenges the documentary authority of historical Chinese photographs by subjecting them to the more reflective process of painting. Much of the meaning of Liu’s painting comes from the way the washes and drips dissolve the documentary images, suggesting the passage of memory into history, while working to uncover the cultural and personal narratives fixed – but often concealed – in the photographic instant.  Washing her subjects in veils of dripping linseed oil, she both “preserves and destroys the image.” Liu has invented a kind of weeping realism that surrenders to the erosion of memory and the passage of time, while also bringing faded photographic images vividly to life as rich, facile paintings. She summons the ghosts of history to the present. In effect, Liu turns old photographs into new paintings.

Recently, Liu has shifted her focus  from Chinese to American subjects. By training her attention on the displaced individuals and wandering families of the American Dustbowl, Liu finds a landscape of overarching struggle and underlying humanity that for her is familiar terrain, having been raised in China during an era (Mao’s) of epic revolution, tumult, and displacement. The 1930s Oakies and Bindlestiff’s wandering like ghosts through Liu’s new paintings are American peasants on their way to California, the promised land. In these paintings, which have departed from her known fluid style in which drips and washes of linseed oil dissolve the photo-based images the way time erodes memory, she has have developed a kind of topographic realism in which the paint congeals around a webbing of colored lines, together enmeshed in a rich surface that belies the poverty of her subjects. In this, the new paintings are more factually woven to Lange’s photographs while also releasing the energy of color like a radiant of hope from beneath the grey-tones of history.

A two time recipient of a National Endowment for the Arts Fellowship in painting, Liu also received a Lifetime Achievement Award in Printmaking from the Southern Graphics Council International in 2011. A retrospective of Liu’s work, “Summoning Ghosts: The Art and Life of Hung Liu,” was recently organized by the Oakland Museum of California, and is scheduled to tour nationally through 2015.  In a review of that show, the Wall Street Journal called Liu “the greatest Chinese painter in the US.” Liu’s works have been exhibited extensively and collected by the San Francisco Museum of Modern Art, the Whitney Museum of American Art, New York, the Metropolitan Museum of Art, New York, the National Gallery of Art, Washington, D.C., the Asian Art Museum of San Francisco, and the Los Angeles County Museum, among others. Liu currently lives in Oakland, California. She is Professor Emerita at Mills College, where she has taught since 1990.