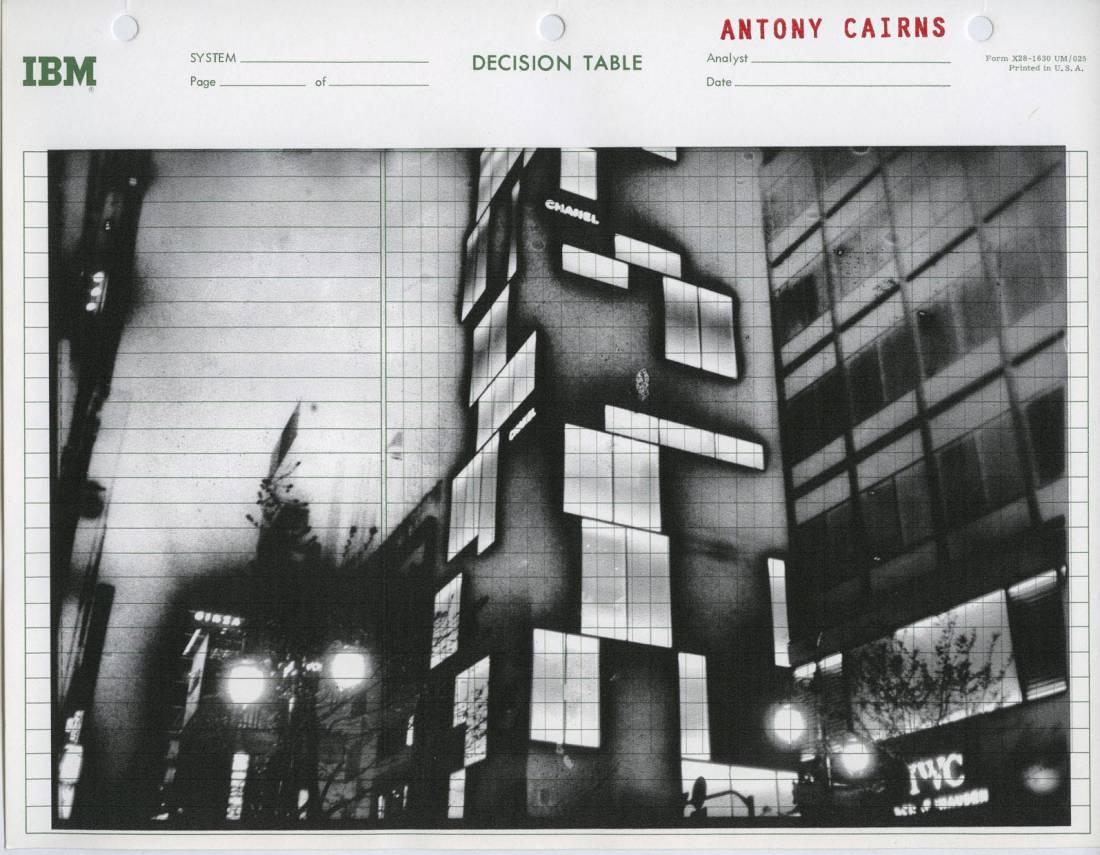 British artist Antony Cairns continues his exploration of the global metropolis in a new exhibition at Webber Gallery; his first UK solo exhibition for over four years.

CTY_TYO3 TYO4 expands on Cairns’ fascination with urbanisation, drawing on the artist’s signature experimental processes to reveal an abstraction of the landscape. Devoid of people and mostly shot at night, Cairns’ haunting urban spaces converge to create a futuristic world that is at once both familiar and strange.

Constructing an archive around the ‘city’ and its myriad connotations is an important and ongoing theme in Cairns’ work, and the artist has spent much time in Japan’s two mega cities; Tokyo and Osaka. The country’s rapid technological expansion easily compliments the artist’s preferred forms of presentation, including sculptural Electronic Ink screens encapsulated in Perspex and large-scale compositional pieces constructed from computer punch cards.

Also on display are a selection from two new portfolios TY03 (2019) and TYO4 (2020). Both depicting the cityscapes of Tokyo, these works have been printed directly onto vintage Cobol coding forms and IBM decision tables, visually embedding themselves in a historic computer language. The combined result is a visual environment which questions the conceptual idea of a city and evokes a dystopian world akin to the imagination of science fiction.

Antony Cairns (b. 1980 in London) works across photography, installation and sculpture, exploring the material process of photography and its intrinsic interplay

with technology. Cairns frequently uses the city, topographies and urban development as an ostensible subject and engages deeply with the history of the photographic medium, experimental printing methods and the aesthetics of abstraction.

Cairns recently completed a 3 month residency with Hyudai Gapado Air, in South Korea and was a previous artist in residence at the Benrido Collotype Atelier in Kyoto. In 2015 he was awarded the prestigious Hariban Award. His work has been exhibited internationally, including LDN at the Rencontres d’Arles, Arles festival in 2013; Matter of Memory: Photography as Object in the Digital Age at the George Eastman Museum in 2016 and Shape of Light: 100 Years of Photography and Abstract Art at Tate Modern in 2018. He has published numerous books including CTY (Morel and Akio Nagasawa Publishing, 2018) and handmade self-published artists books such as LDN (2012) TYO2 (with Goliga, 2017)

Other events from Webber Gallery