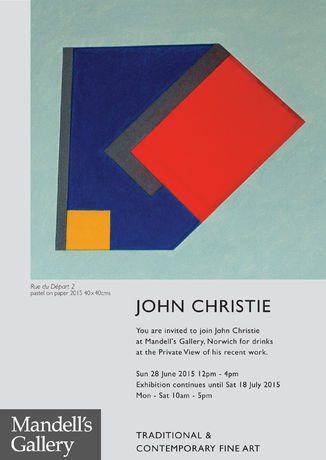 This exhibition is made up of work mostly completed since 2012. Architectural themes have been occupying me recently and ‘Rue du Départ’ is a series based on floor plans and isometric drawings of Mondrian’s studio

This exhibition is made up of work mostly completed since 2012. Architectural themes have been occupying me recently and ‘Rue du Départ’ is a series based on floor plans and isometric drawings of Mondrian’s studio (1921-36) at 26 Rue du Départ in Paris. Both ‘GRILL’ and ‘Monument’ have building and construction as their underlying themes as does ‘Windows’, a series of geometric variations for a stained glass window.

Before these architecture-based images I was working with ‘Dazzle’, a World War 1 naval camouflage system which used bold geometric patterns to visually disrupt a ship’s form and thereby (hopefully) confuse predatory enemy submarines. By the end of June 1918 more than two thousand British ships had been painted with these striking patterns. Art dealer René Gimpel described the sight of the ‘Dazzle’ camouflaged fleet in harbour as ‘like an enormous cubist painting with great sheets of ultramarine blue, black and green, sometimes parallel but more often with sharp corners cleaving into one another...’. My long association with artist’s books, book-making and printing means that the page is never far from my thoughts and a number of works use the visual form of the double-page spread, as in the 2012 ‘Dazzle’-influenced series ‘from The Book of Deception’.

When selecting work I decided to include a few earlier pieces made following a trip to Australia in 2000. The colours of the earth there changed my ideas and working methods. At the art school in Canberra I made a large chine-collé print, ‘Take a handful of earth...’, the title a quote from the architect Glenn Murcutt and the colours, red iron oxide and yellow ochre, taken from the landscape seen below during the long flights back and forth. Once back home I graduated quickly from the powder pigments I’d brought back from Australia to the more controllable medium of chalk pastel. As a result the use of colour in my work shifted from the fundamental range of those earth pigments to the more extensive and vibrant palette offered by pastel.

In addition to pastel I sometimes use the medium of rust on paper which brings its own range of beautiful, chance colours into play.

Most of these pastel works have their origins in small, one-off painted constructions where a shape is assembled from wood then sawn apart and rearranged to form a new piece from the cut fragments. The pastels are a way of making further variations in both colour and size from these constructed objects.