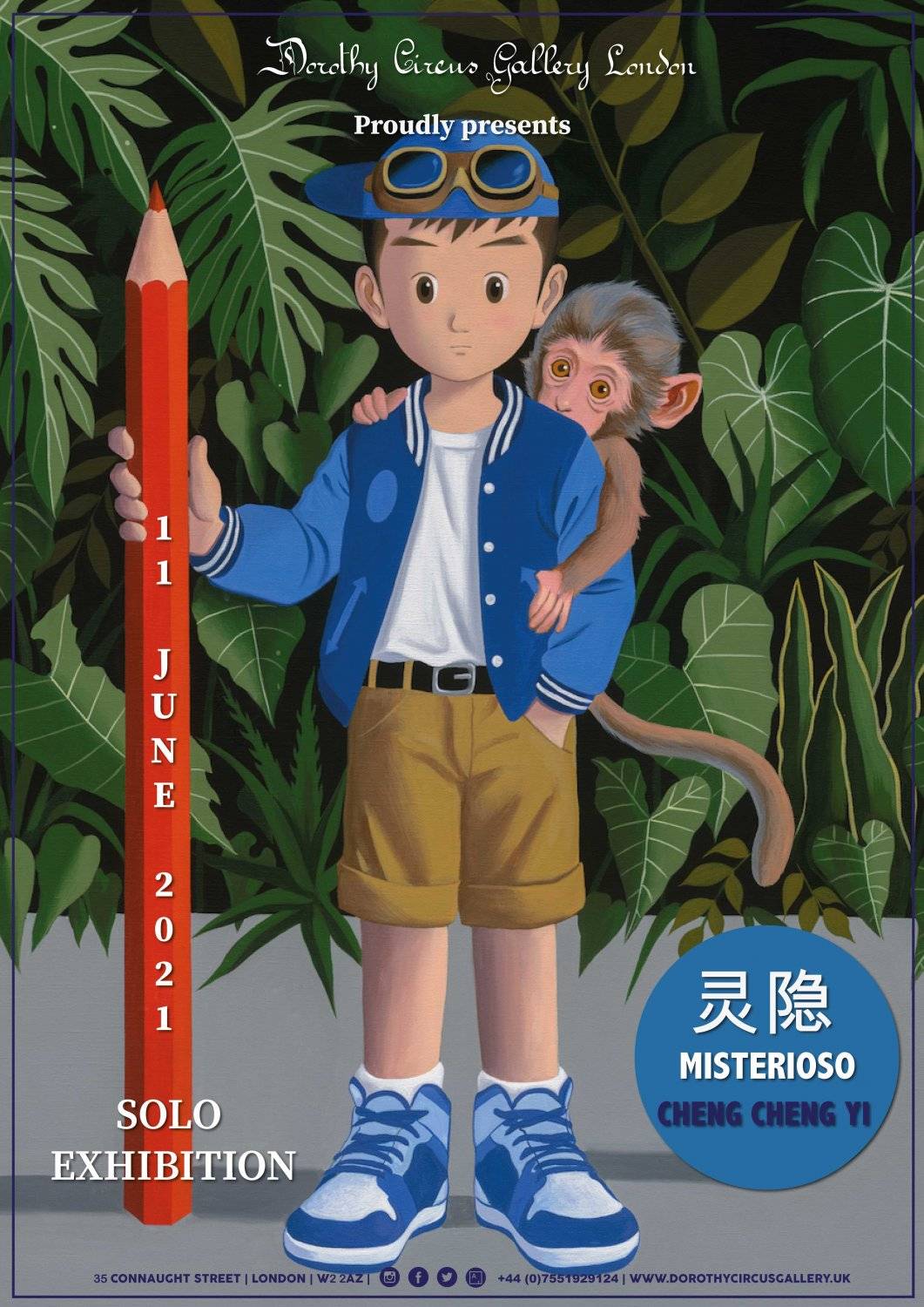 Dorothy Circus Gallery London is proud to present to its public Misterioso, the first British solo-show for Chinese artist Cheng Cheng Yi. For this occasion, the artist presents a new series of 6 acrylics on canvas inspired by the latest trends in the contemporary Asian avant-garde. The exhibition will inaugurate from the 11th of June 2021 until the 30th of July 2021 at Dorothy Circus Gallery in London at 35 Connaught Street, W2 2AZ. The Private View for the event will take place via invite on the 10th of June 2021.

Similarly, in terms of research and influences to iconography linked to Anime and Manga, Cheng Cheng Yi has now established himself in the international and Asian market, thanks to his use of captivating colours and the portrayal of his subjects. For this particular new series, the characters are accompanied by splendid animal characters, depicted with more extraordinary vividness and realism than human characters.

Once again, Dorothy Circus Gallery is the protagonist in the scouting of talented participants of Asian contemporary. Each artist distinguished by their manual dexterity and influenced by the cornerstones of Japanese contemporary art, Studio Ghibli, to name one, can be considered a relevant inspiration. In contrast to the Western and American Disney culture, the influence of the incredible work by titans of contemporary film literature, such as Studio Ghibli, reveals itself to be potent in many Asian contemporaries, also relevant in today's generations.

Thanks to the fantastic and un-worldly features of the characters, they can lead the viewer on a rich journey into Japanese animism and spiritualism. The imagery proposed by Studio Ghibli has formed a generation of incredible artists whose technique and contents reflect its multifaceted nature of East and West meeting. In the new series Mysterious, the viewer finds those same elements that have characterised the fame and success of the Studio and Manga. From the romantic nuances contaminated by French cinema to its messages' educational and formative value, aimed at an audience of any age.

From Moon Beam to Funky Monkey and Double Swallow, to name a few, Cheng Cheng Yi once again plays with the flexibility of different forms and elements, which does not forget the folkloristic and cultural component of the artist's origin, China. Particularly with its potent symbols, legends and millennial stories. The characters contrast with their rather introspective nature and their evident proximity to Mother Nature, particularly apparent in his artwork Treasure.

Hoping that the visitor can let himself be conquered by this artistic pilgrimage in the land of the Rising Sun, therefore, through the most avant-garde of its figurative tendencies. Dorothy Circus Gallery presents Mysterious to the public, hoping that its Asian soul will envelop it the soft notes of the same music of the Thelonious Monk Quartet that inspired its creation.

Founded in 2007 in Rome and with a second branch in London since 2017, Dorothy Circus Gallery is a space dedicated to the most intriguing new tendencies in contemporary art, with great focus on the most original and compelling traditional and digital painting techniques and visual codes stemming from pop iconography, contemporary surrealism and street art.

Thanks to its focus on figurative visual codes (that have been set aside until the first decade of the 21century) and always privileging harmonious techniques and emotional narratives, the gallery has played an important role in paving the way for the return of figurative and surrealist art, with pop iconographic nuances. An art completely innovative, and at the same time strongly linked to the tradition of classical painting.

Through a vigorous research, the gallery unveils to its international audience role ground-breaking established and emerging artists from around the globe. In addition to its gallery work, Dorothy Circus has always been involved in cultural and social battles, raising awareness on a wide range of contemporary issues, by curating several institutional projects and collaborating with museums and not-for-profit organisations.

Other events from Dorothy Circus Gallery