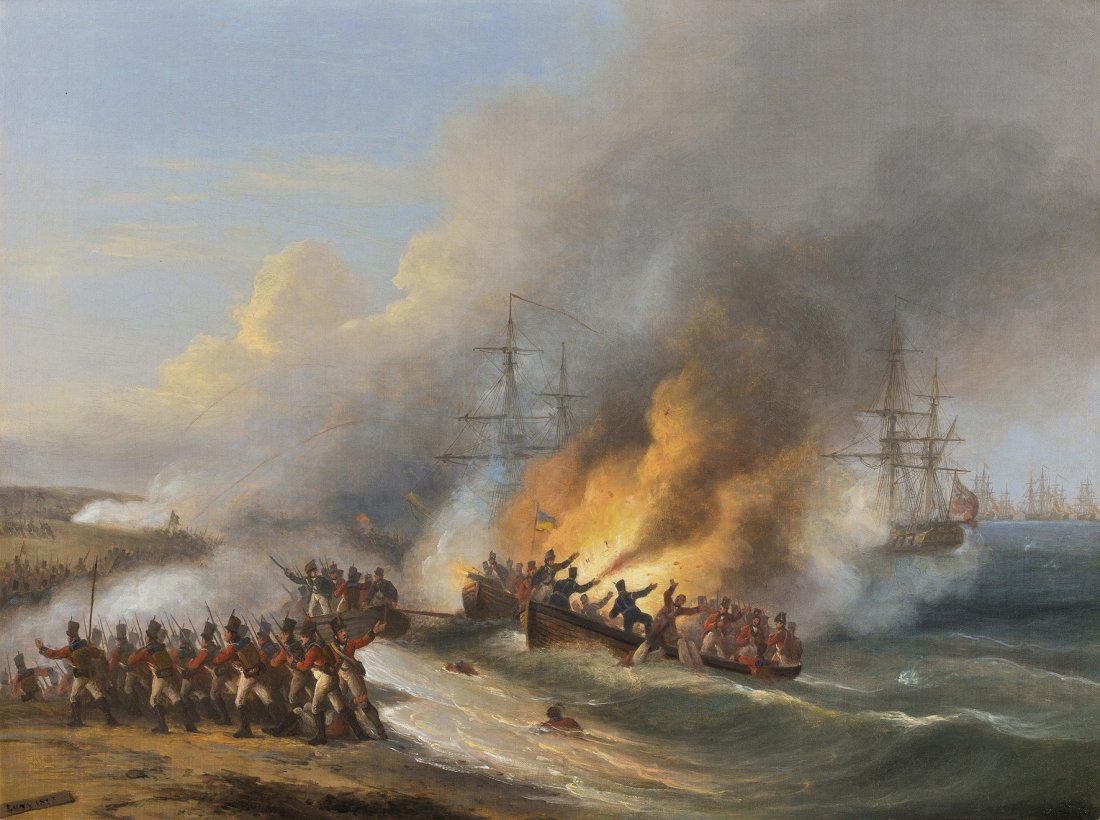 5 October 2017, London – War: Land, Air, Sea, a major exhibition that documents the nature of warfare through images from across three centuries, will open at Rountree Tryon Galleries, specialists in maritime, travel, sport and wildlife fine art, on 10 October.

A compelling subject matter for many artists, particularly those involved or witness to frontline warfare, War: Land, Air, Sea features twenty British and international artists renowned for their differing styles and genres but bound by their exposure to war over the centuries.

With over 30 works work from Thomas Luny, Ambroise Louis Garneray, Paul Lucien Maze, Norman Wilkinson, Frank Watson Wood, Thomas Whitcombe, Nicholas Pocock, Gordon Rushmer and finally, Charles Pears, who’s hauntingly atmospheric painting of The Evacuation of St. Nazaire was undoubtedly the tour de force of his artistic career.  This important and most significant example of his work was recovered two years ago by Rountree Tryon Galleries after it was considered ‘lost’ shortly after the Second World War before coming back on to the market earlier this year.

From historical naval engagements to troops landing in high combat attacks, War:  Land, Air, Sea moves through the progression of war through the ages from Thomas Luny’s impressive battle painting of the amphibious landing in Aboukir Bay in 1801 during the Napoleonic Wars through to Gordon Rushmer’s hauntingly beautiful interpretation of the recent combats in Afghanistan and finally to Remembrance, an emotive watercolour of poppies in a Sussex church window, a poignant reminder of the lives sacrificed.

The exhibition also features powerful work from the remarkable French polymath artist Ambroise Louis Garneray who, following his capture in 1806, spent eight years confined to a Prisoner-of-War hulk in Portsmouth harbour where he painted a series of views of the moored prisoner ships, now considered as the definitive record.

Jamie Rountree, Founder and Director Rountree Tryon Galleries, “We are delighted to be showing War: Land, Air, Sea, an important collection of work that brings together some of the world’s most remarkable war artists who have been witness to devastating combats from the 18th century to present day operations.  Every artist in War:  Land, Air, Sea is known for their precision and accuracy in recording each battle scene or troop landing and today, many of these works are seen as the definitive record of the time. Ultimately, War: Land, Air, Sea serves as a tender reminder of the history of war across our land, air and seas and how combatant nations continue on with the age-old aspiration ‘to triumph over adversity’.

Rountree Tryon Galleries was founded in 1959 and are specialists in four key areas of fine art:  sporting and wildlife, maritime, topographical and contemporary paintings with works ranging from the eighteenth century to the present day. In 2016 Rountree Tryon Galleries opened its second gallery in West Sussex, nestled within the beautiful and historic market square of Petworth, an area synonymous with sporting pursuits.  Rountree Tryon Galleries is a world expert in maritime art and an advisor to the British Government on pictures of national and historical importance.  Rountree Tryon has a vibrant art program featuring work from leading artists in their specialist fields. Founder Jamie Rountree is a passionate animal conservationist.  For further information on past and current exhibitions visit www.rountreetyron.com.