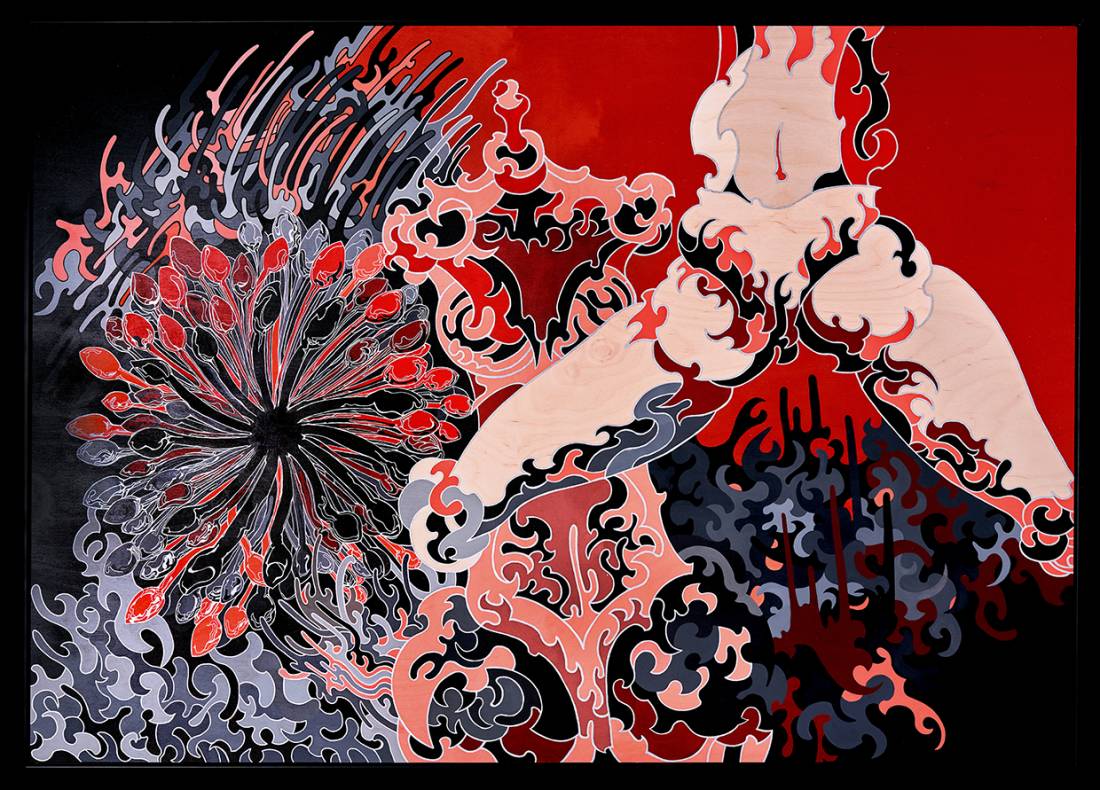 The Void of Desire: Minju Kim x Eugene Wood proudly presents its first collaborative exhibition in Truman Brewery. Postponed two times in 2020, due to the pandemic, two London based artists come back with stronger artworks that represent how they responded to this era and how they developed their own desire in art. Gazing into the void, the gap of human desire, life and death; two artists explored their own reflection and manifested it into their artworks.

Minju Kim initially presented her solo show Anatomy of Desire, 2018 in London and Eugene Wood has been exhibiting his solo show Illuminating the Void, every year in Truman Brewery. Two artists decided to carry their own theme by merging each other’s concept and the journey of The Void of Desire began.

Minju Kim, South Korean born, London based artist creates her paintings and sculptures, illustrating how human desire and fragility of the body works in mortality.

Her creation is a result of studying the inner body, human anatomy and the medical science in terms of her life experiences regarding her ongoing medical treatment for breast cancer, she has continued her journey as a female artist, and exhibited extensively across Europe, America and Korea.

Eugene Wood, British artist based in London, portrays in traditional oils combined with more modern materials such as resins and pouring mediums , his abstract recreations of the glory manifested in the ordinary, to recapture the inner light infinite with significance. Finding beauty in the mundane and the extraordinary in the familiarity of his surroundings using a slowing down of perception to see the unseen.

Minju Kim is a South Korean artist based in London. She is an emerging painter and sculptor who has exhibited her work internationally. Her work explores desire as a main subject matter alongside the concept of life and death, inspired by human anatomy and psychoanalytic theory. She initially studied printmaking at Hongik University in 2007-13, followed by MA in Visual Arts: Illustration at Camberwell College of Arts (Distinction) in 2015-17.

Eugene Wood is a British contemporary painter, working primarily in oils.  Wood studied at the Pittville College of Art, the Cleveland College of Art and the Van der Kellen Institute of Painting in Brussels.  He won the Threadneedle Prize in 2011 and had exhibited extensively throughout the UK.