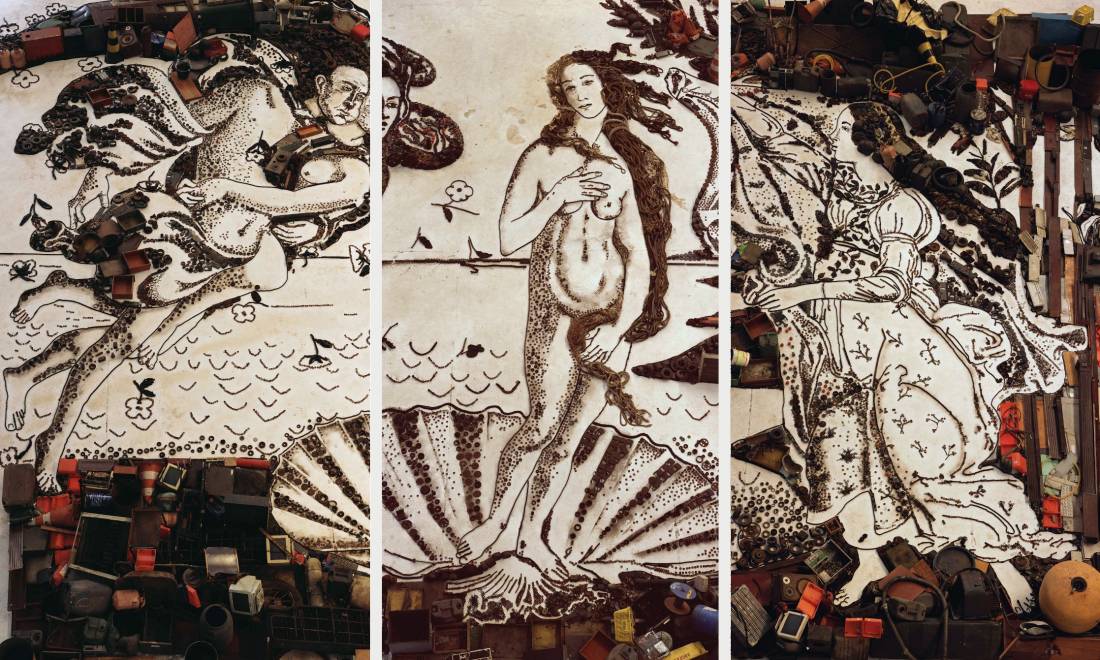 Vik Muniz: A Brief History of Art brings together a selection of the artist’s most iconic and evocative works from the last two decades and will take place at Ben Brown’s flagship London gallery in addition to an impressive new 130 square metre pop-up space in Mayfair, on Grosvenor Street.

Vik Muniz is renowned for his complex photographic works and unique employment of a wide range of unconventional materials, including dust, sugar, chocolate, diamonds, caviar, toys, junk, scrap metal, dry pigment, vintage postcards and magazine shreds. Muniz is a mastermind of mixed media, who recreates historical artworks with these unusual materials and then captures the result through his unique photography. Taking the viewer on a fantasy tour through time and art history, Vik Muniz: A Brief History of Art presents a broad range of Muniz’s artistic practices, spotlighting him as one of the most ingenious and imaginative artists working today. Originally a sculptor, Muniz grew increasingly interested in the photographic representations of his works, eventually focusing on photography with a broad perspective, from the 15th Century to the present day.

Inspired by artists across centuries and movements, from Sandro Botticelli and Francisco Goya to Van Gogh and Gerhard Richter, the exhibition features re-imaginings of famous masterpieces from the Early Renaissance through to 21st Century masters. Reconstructing images that tap into the viewer’s subconscious visual repository, these works ask us to reconsider the familiar imagery in its altered form. Material constructions are photographed, then either magnified or shrunken in scale, with the final work of art becoming a documentation of his conceptual and artistic processes.

At the same time, by embedding messages and symbols, the works uncover a layering of meaning that looks through pure representation. When the viewer looks, they first see something they think they have seen before, but upon closer inspection, they realise that it is something else. Through examination, each slowly reveals more and more, becoming narrative – in doing so, Muniz depicts what a story might look like within an image, capturing the subjectivity of history. The ordinary materials he uses expose a political underbelly, and the final works become an examination of how we define our modern society.

“The gap between the mental image and the novel image, which is slightly different from the one before, is a whole universe in which to think about images – how you see them and how you think about them. I think the difference of an image that you can consider artistic lies in the fact that inspires you to think about how you see other images. I think different artworks mark in a seminal way the history of how we see things – the history of visuality.

“I always try to make things that have a relationship between the parts and the whole. The idea of a mosaic is quite interesting, because you have both image and material trying to fight one another. It is not something fluid like pencil and ink – they are pieces of things. That creates a tension between material and subject.” Vik Muniz

Muniz has been exhibited worldwide and his work is included in major collections such as: the Guggenheim Foundation, New York; Tate, London; and the Museum of Contemporary Art, Tokyo. He represented the Brazilian Pavilion at the 49th Venice Biennale in 2001 and in 2010 was the subject of the Oscar-nominated documentary feature film entitled ‘Waste Land.’

Other events from KTW London