Too Much Too Young 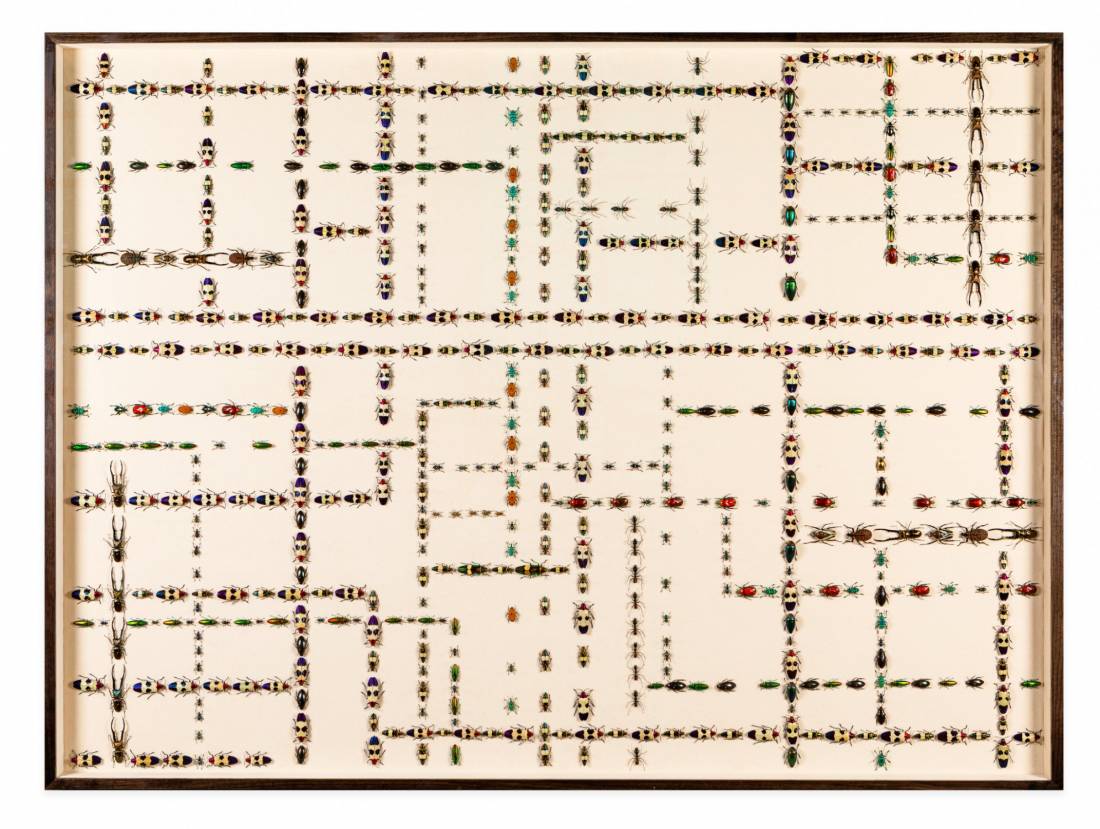 Shapero Rare Books are delighted to present a new exhibition entitled Too Much Too Young by the artist Jolyon Fenwick, which will run from the 23rd of February to the 18th of March.

Fenwick first won praise for his work marking the anniversary of the Somme offensive, in which he replicated photographs from the battlefield of the most catastrophic engagement of the First World War at the exact time and location, one century on.

In this exhibition, Fenwick continues to play with the power of nature, though in a very different form. A central series of his work is titled ‘Compositions with Beetles & Butterflies’, bringing together the popular pastime of taxidermy with a careful conceptual background. With works like Live Fast and Too Much Too Young, Fenwick uses riotously coloured butterflies to compare the beauty of nature with its inevitable ephemerality, while pieces such as Still Small Voice, which places one small, white albina butterfly against an onslaught of slate-coloured Memnon butterflies, evoke the tenacity required to stand tall and bright against a menacing majority.

Another highlight of the exhibition will be The Good Versus Evil Table Football XIs Wait to be Presented to her Majesty the Queen. A light-hearted take on Queen Elizabeth II’s willingness to appear at both national and village occasions, without discrimination or complaint, it is particularly relevant in this, the year of the Queen’s platinum Jubilee. Its mixed line-up of the low and high of society, with everyone from Lady Macbeth and the Child Catcher to Santa Claus and St. Francis of Assisi represented, highlight the simple amusement of the game it represents.

‘Virus Classics’, Fenwick’s playful sculptural response to daily life during the Covid-19 pandemic will also feature. Taking inspiration from the work of Penguin English Library cover designer, Coralie Bickford-Smith, Fenwick’s piece substitutes the titles and cover designs of iconic novels from across the ages for versions which remind us of the lighter sides of lockdown. Titles include Waiting for Ocado, and At Least Two Meters from Madding Crowd, as well as Thomas Hardy’s Tom Brown’s Home School Days. ‘Virus Classics’ is presented in two versions, one with all the book covers facing, and a version with only the spines visible.

On show also will be Fenwick’s ‘A Decline in Mental Health’ collection, a series of sculptures in glass marble. Arranged in geometric patterns, the occasional marble which has made its escape from the pattern reminds the viewer of the famous phrase. With names like Henry and Verity, the sculptures take on an almost representative idea of real human minds.

As well as being an artist and author, Fenwick runs a picture dealing business in Oxfordshire and regularly stages group exhibitions featuring the work of a wide range of artists drawn from all periods of the history of art from pop artist to surrealists and impressionists.
He is the author of three books: Einstein’s Watch (Profile Books November 2010), It Could Have Been Yours (Profile Books November 2011) and Zero Hour: Views from the Parapet of the Somme (Profile Books June 2016). Zero hour accompanied his much acclaimed The Zero Hour Panoramas photography exhibition at the Sladmore Gallery in the summer of 2016.