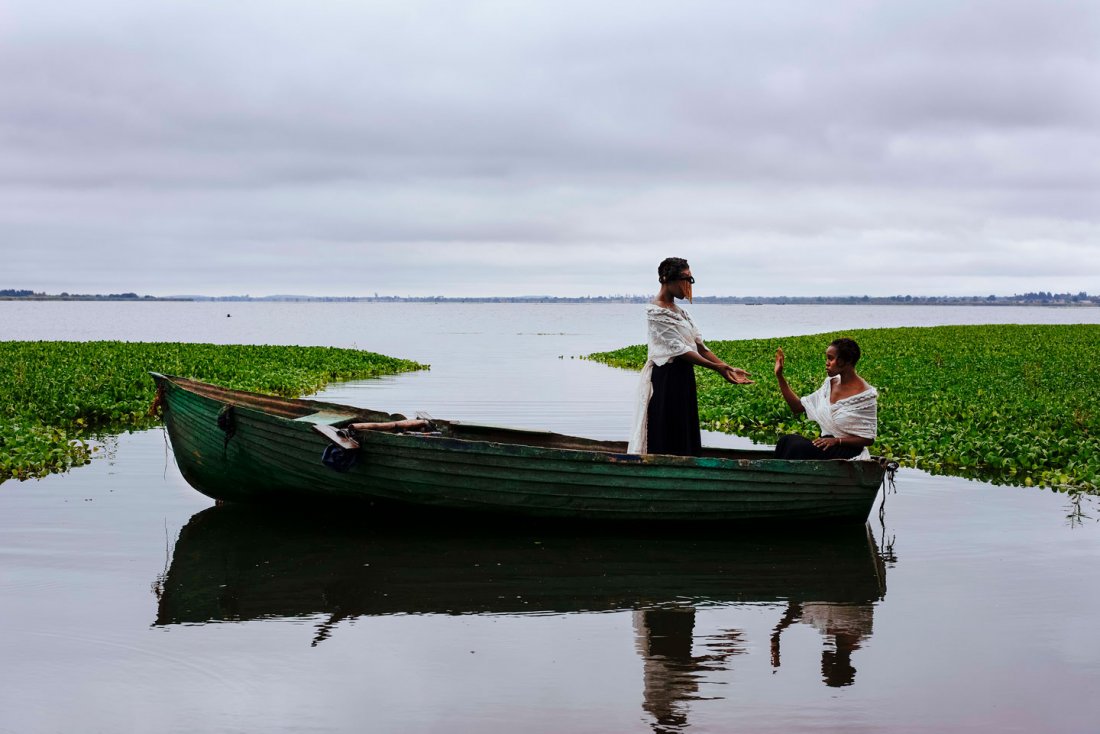 Tyburn Gallery is pleased to present Speaking Through Walls, Sethembile Msezane’s first UK solo exhibition.Using interdisciplinary practice encompassing performance, photography, film, sculpture and installation, Msezane creates commanding works laden with spiritual and political symbolism. The artist explores issues around spirituality, commemoration and African knowledge systems. She processes her dreams as a medium through a lens ofthe plurality of existence across space and time, asking questions about the remembrance of ancestry.

For this exhibition, Msezane has created a body of work which consists of photographic pieces as well as larger installations. These works present surreal dreamscapes in which the artist experiences psychic encounters with her own self and with her ancestors; an exploration of her profound connection with others who have inhabited the physical landscapes depicted. Spiritual and historical relationships to these specific South African and Zimbabwean landscapes are explored, laying bare the violence and dispossession experienced during colonialism and Apartheid, but also revealing additional layers of history – the greatness of earlier indigenous civilisations, architects of monumental cultural, technological and spiritual systems.

Reflecting upon a difficult past, the artist asks the question, ‘How do we begin to humanise ourselves in spaces and on grounds that have been fertilised by bloodshed?’, and reflects on mending the spiritual tear that came with the looting of land that carries the bones, memories, rituals and traditions of African ancestry.This body of work finds traces of ordinary people practicing cleansing and prayer in these landscapes, most of which are nestled close to urban settings. These spaces carry historical baggage, but they also carry possibility, in the same way that plants, like the fynbosthat grows there, are stimulated to grow in the aftermath of fire, ready to burst forth for the next season in spite of the seeming barrenness.

This narrative of the recovery of land, spirituality and dignity comes at an important moment in history, when South Africa is grappling with the issue of land reform.

Alongside her solo exhibition in the gallery, Msezane will present a screening of her short film Falling, followed by a Q&A, in association with ArtReview, at ArtReview Bar on Wednesday 23rdJanuary at 6pm. She will also be staging a performance of her newest piece, Signal Her Return III,at New Art Exchange in Nottingham on Friday 1stFebruary from 7:30 to 8pm, followed by an artist talk on Saturday 2ndFebruary from 11:30am to 1:30pm.

Msezane’s work has been widely exhibited across South Africa and internationally. It was included in All Things Being Equal…, the inaugural exhibition of the Zeitz MOCAA in Cape Town, and forms part of the museum’s collection, as well as that of the Iziko South African National Gallery in Cape Town, and the University of South Africa (UNISA), in Johannesburg. In 2015, during protests by the Rhodes Must Fall Movement, she presented the performance Chapungu - The Day Rhodes Fellat the removal of the Cecil John Rhodes statue at the University of Cape Town.

In 2018, she staged a performance for the ICA Arts Live Festival in Cape Town, as well as performing at the National Museum of Denmark in Copenhagen, as part of the conference Changing Global Hierarchies of Value? Museums, artifacts, frames, and flows, organised in association with the University of Copenhagen. She also performed at dOCUMENTA 14 in 2017 in both Athens, Greece, and Kassel, Germany, as part of iQhiya (collective). The same year, she was a speaker at the TED Global conference held in Arusha, Tanzania. She has participated in residencies including the Sylt Foundation Emerging Artist Residency, Sylt and Künstlerhäuser Worpswede, Germany (2017), and the Situate Arts Lab Residency, Hobart, Australia (2016).