SOPHIE BARBER: The Greatest Song a Songbird Ever Sung 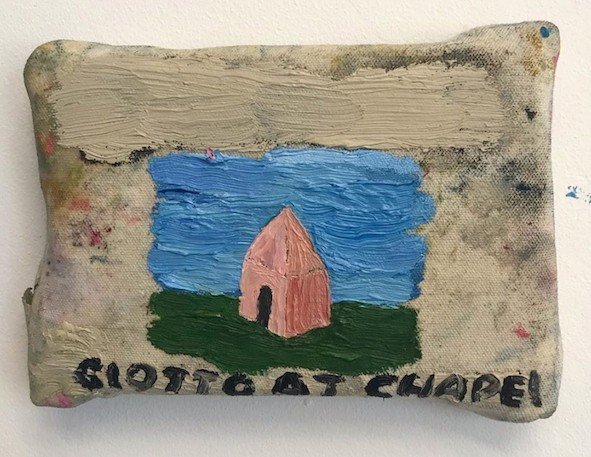 Sophie Barber will produce a new series of large-scale paintings for her first exhibition in London, as part of Goldsmiths CCA’s Episodes series. Barber’s painterly practice revolves around her interest in the natural world, and life on the Sussex coast. Often humorous and tender these heavily impastoed canvases of significant scale, simultaneously dictate an intimacy and architectural presence. Towering heavily above the viewer, the weight and scale of these works are a testament to the artists’ body and the action of painting, labouring to manipulate her materials and repetitively rework the surface.

Backgrounds of dense colour support surreal forms; fragments of recalled images that have somehow stuck with her. Each are rendered on unstretched canvas and when hung become tent-suggestive of hiding spaces or theatre backdrops. Wads of used canvas are repurposed and affixed onto new works, like hosts of old ideas. Often subtitled with texts that refer to bird and tent clubs, both fictional and real, these paintings evoke Barber’s local surroundings, in and around Hastings. Barber greatly values the importance of legacy in the trajectory of painting practice looking towards a lineage of artists such as Philip Guston and Rose Wylie, as well as being strongly linked with a group of painters from the South Coast.

Sophie Barber (b.1996, St Leonards-On-Sea) is a graduate from the University of Brighton’s BA (Hons) Fine Art Practice at Sussex Coast College Hastings, 2014-2017 and was awarded the CVAN South East Platform Graduate Award in 2017. She has exhibited at Project 78 Gallery, St Leonards (2018) and De La Warr Pavilion, Bexhill-on-Sea (2017).