Sonia Boyce: We move in her way 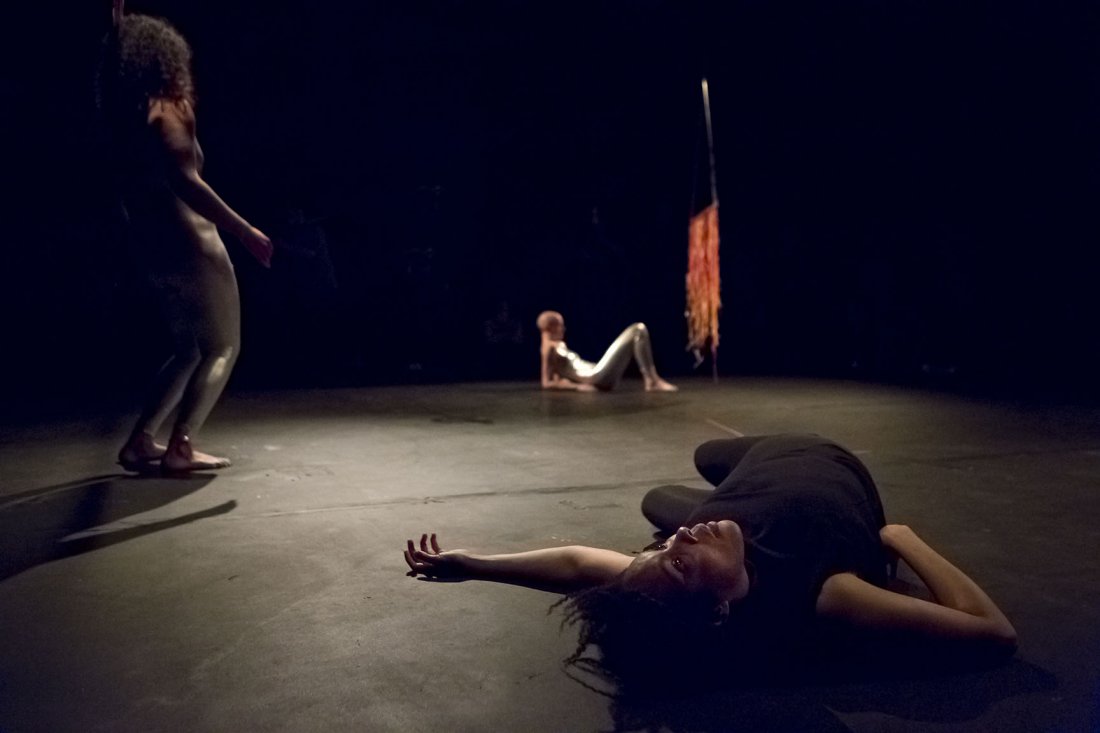 Sonia Boyce’s piece We move in her way involves the exploratory vocal and movement performances of Elaine Mitchener, Barbara Gamper and her dancers : Eve Stainton, Ria Uttridge and Be van Vark, with an invited audience. The title of the work suggests two possible readings: that ‘she’ dictates our movements; or that we obstruct ‘hers’, with both interpretations suggesting power is at play.

Boyce has a participatory art practice where she invites others to engage performatively with improvisation. In this process, she encourages contributors to exercise their own responses to the situations she enables, where she steps back from any directorial position to observe the activities and dynamics of exchange as they unfold. Once the performance is played out and documented, Boyce reshapes the material generated, in what she calls “recouping the remains”, to create the artwork as a multimedia installation.

We move in her way was created in this way as a performative laboratory, in which the audience and performers negotiated the ICA Theatre space around sculptural objects and their own bodies. Play and playfulness unfolded during the open-ended live performance, sparking a breakdown of assumed order between performers and audience. The dynamics of power-play shifts between the masked audience, the performers and the sculptural objects created as a means to facilitate touch and being together, whilst remaining distinct.

Notions of difference and relatedness make reference to the enduring influence of Dada within We move in her way. Processes of collaborative improvisation are exemplified in the piece, referencing the Brazilian artist Lygia Clark in the late 1960s and 70s. Some of the masks worn by the audience are a re-working of Sophie Tauber’s ‘Dada Head’ (1920) – itself an appropriation of Oceanic sculpture. The final artwork takes another playful turn to create a multi-layered and multimedia installation.

Sonia Boyce (b. 1962) is a British born artist who lives and works in London. She studied Fine Art at East Ham College and Stourbridge College of Art & Design (1979-1983). At the heart of Boyce’s work are questions about the production and reception of unexpected gestures, with an underlying interest in the intersection of personal and political subjectivities. Since the 1990s she has been working with the improvised actions of others to create multi-media artworks.

Other events from Institute of Contemporary Arts