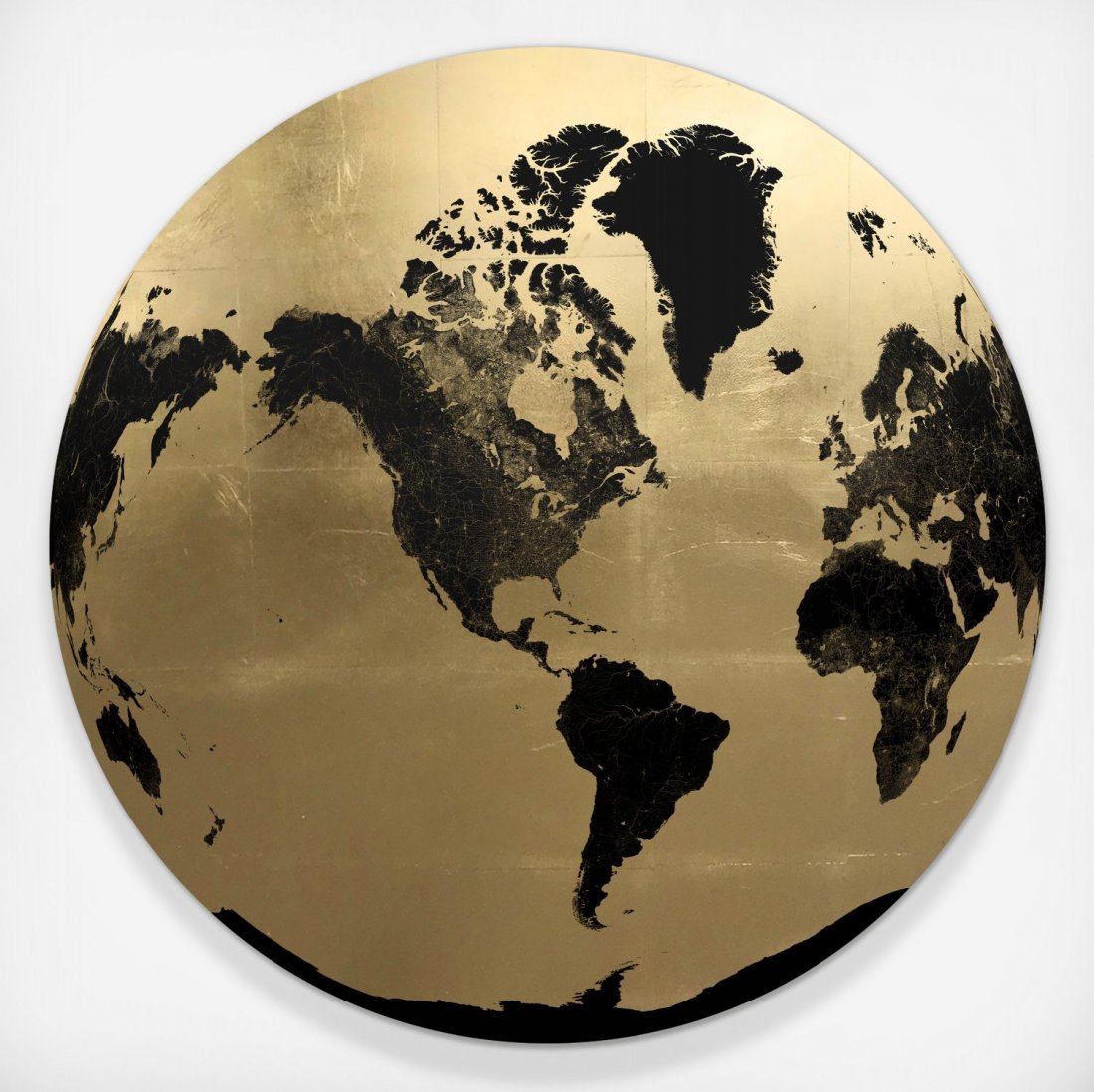 Eason is a London based artist, who since 2010, has steadily attracted the attention of institutions like the Barbican, the RA and Christies. His stunning collection of gold circular maps, have also featured in the Sunday Times Style Magazine, World of Interiors and BBC’s The Night Manager. Simply put, he produces contemporary maps of major cities, gilded in gold and silver leaf. The overall effect is arresting. Iconic topographical surfaces in shimmering precious metals create an understandably, powerful and abstract beauty.  And then your eye zooms in to an intricate network of connective tissue made up of places and rivers – all of which you realise will be rewritten in as little as a decade.

Our fascination with maps is well known. These navigational tools have taken many forms over the years and have always had a powerful effect on the imagination. Eason’s study of historical maps, in particular, the discovery of the Victorian Sociologist Charles Booth’s ‘poverty maps’, colour coded in black, red and yellow to mark the working, middle and upper classes, moved him to explore the idea of ‘art as documentation’; precious snapshots of an ever-changing landscape whereby the colours themselves create an alternative abstract map within a map. The use of precious metals and carefully selected colours is to help the viewer ‘focus on the sacredness and diversity of our living landscapes’ he says. The flattened surfaces in gold or silver soften our gaze to reveal what he calls the ‘egalitarian nature of the city’. He is captivated by the birds-eye-view – an experience he enjoys when he’s in a plane looking down. His process of working is almost alchemical in its technical precision, resulting in a distilled abstraction of information made up of the microscopic realities of organic and man-made patterns. From his obvious love and dedication to the art of cartography, one begins to understand why maps have functioned as a tool for the more ethereal and spiritual as well, in art forms like the Buddhist Mandalas.

After his hugely successful solo show Mappa Mundi at 45 Park Lane in London, which showcased major cities around the world, this exhibition, Sacred Sceneries chooses to remain local. Like many he is affected by humanity’s impact upon the environment. London Fields is a reimagining of central London as an area of multi-coloured green fields. Inspired by antique maps of London in which there were more fields rather than housing, it allowed him to explore another medium which fascinated him – that of stained glass windows and whether he could create a stained glass window from a map. His answer is an elegant and contemporary lightbox which recreates the effect. His reinterpretation of London is once again surveyed in the gold treatment of two works; City perspectives, London Buildings and London Roads. As the titles suggest, gold leaf is used unsparingly but painstakingly to map out roads in one, and buildings in the other. By removing distinguishing names and words he creates an abstract image from reality, returning once again to the theme of egalitarianism. Hundreds and Thousands in contrast to the other works, uses a multitude of colours and gold leaf to celebrate the diversity of London.  British Contour Curves is a majestic series of works in blue UV ink and gold leaf which maps the 6 main British mountain ranges of Snowdonia, the Peak District, the Lake District, the Yorkshire Dales, The Brecon Beacons and the Sperrin Mountains. The fragile contour lines are drawn in gold but as a collective, the works communicate a strong sense of the sacred and the importance of looking after our world. Contour Curves – South East England is a circular piece with white UV ink, stained glass spray paint and silver leaf – the latter of which was selected to reflect the sacred the sacred earth. Its overall abstraction captivates the viewer and somewhat resembles the majesty of the Earth as a planet and living being. One gets the sense in Sacred Sceneries that the artist has journeyed on from Mappa Mundi and allowed himself to reflect and really appreciate the now before it changes tomorrow.

'We are so excited to be exhibiting Ewan's newest works. After the success of our collaboration back in 2017 at 45 Park Lane we have been following him closely and are looking forwards to showcasing some new approaches to his map-work.' 'The ideas of recording, preserving, change and flux have never been more important. In these rapidly changing times the link to home and the known anchors us. We love the personal reflection in all of Ewan's work'