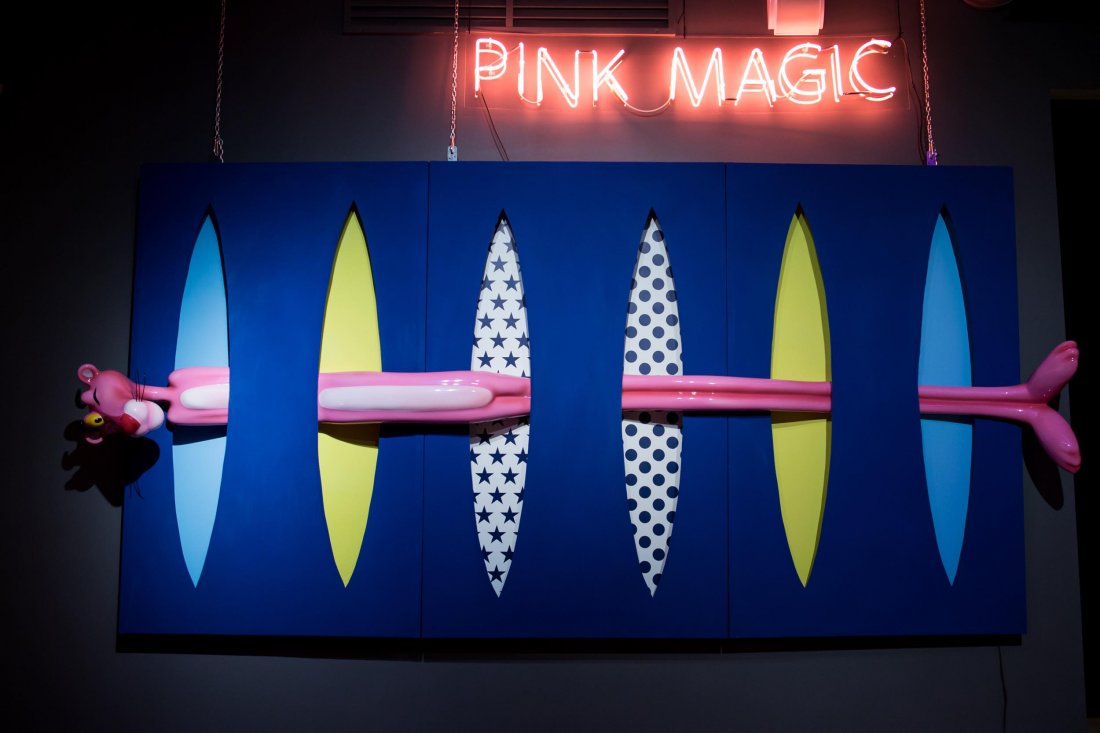 Solo show ‘Pink Magic’ by Russian-British artist Olga Lomaka. This new series of works contains elements of installation and sculpture and based on the interplay of a three-dimensional space and the illusion of flatness which express the artist’s attitude to the act of creation ex nihilo – out of the void and absoluteness of the canvas.
Lomaka continues to synthesise in her work her own exploration of psychology, philosophical concepts, and experiments with different movements of art. The issues of the world order, the imperfections of modern society and the psychology of human’s consciousness are viewed by Lomaka through the prism of pop-art, bringing to life fascinating parallels and unveiling their true meaning.
Installations in 'Pink Magic' are the first project by Olga Lomaka in these art movement: putting the sculptural elements into canvas covered special constructions the artist works in several planes to transfer a three-dimensional effect. The use of different materials to create works has become a kind of tradition in the author's style, moving from the classical wood in the ‘Artefacts’ project to industrial fiberglass.
The form and content are also subjects to careful analysis and study, there are no standard solutions in 'Pink Magic', the flatness turns into an illusion and acquires volumetric characteristics due to the introduction of special frames and a game with colour. The idea of searching for the unknown in familiar routine objects and forms was started by Lucio Fontana, Italian abstractionist artist of the middle 20th century. It finds its further intriguing development in the project Pink Magic and becomes its first essential basic element. The holes in Lomaka’s constructions, in the same manner as in Fontana’s cuts, lure in with a string of magical discoveries and promise a sensual pleasure, eventually bestowing a new life upon those who would dare to explore them. It is a symbol of sexuality, femininity – the womb that begets life and gives pleasure.
The second important element of the project is the male character from the popular film series known as the Pink Panther. He emerges in front of the audience through the opening in the construction, above it or even from behind. His colourful figure embodies the better known to the viewer image of the cartoon character. This cartoon personage was featured onscreen in the early 1960s and since then has been perceived as a pop icon in mass media. At the same time it stood out as a symbol of a very rare precious stone – a giant pink diamond, which bestowed upon its owner a whole range of material possessions and a guaranteed satisfaction of any desire, the Pink Panther figuratively possesses magical properties by association.
The interaction between the main characters in each of the twelve installations reveals new facets of the relationship and the main essence of the art project uncovering in the thirteenth work, titled Infinity.  It stands out among other works, being displayed above, or beyond them as the quintessence of life, the interdependence of male and female, and most importantly – as the magic of life in a continuity of existence – it is precisely at this point that Lomaka reveals her author’s intent.
In developing her discourse on masculinity and femininity, Lomaka transforms a traditional «battle of the sexes» into a joyful play from which both parties derive pleasure. She focuses on the climax of their mutual relationship, resulting in these moments of magic. The Pink Panther takes various imaginable poses and positions around the almond-shaped hole, powerless to escape its magical attraction, revealing his dependence. Only when being joined together and acting together, they achieve the desired catharsis, so evident in joyful emotions of Panther, manifesting it through stars and circles, which inhabit the space inside the cut. Only then, as the artist believes, the «pink magic» happens.

Other events from Olga Lomaka