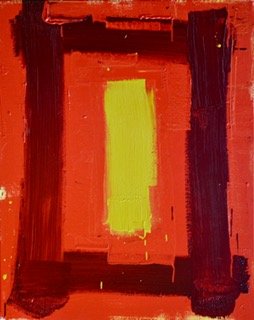 This is the pivotal exhibition in Marcus Hodge’s established career. It respresents a radical departure from representational painting towards work of a more abstract nature. Many of these symbolic paintings were inspired by a further trip to India and time spent in Mumbai. The Gateway of India left an indelible mark and so became the starting point for a series of paintings, as well as a metaphor for the stylistic change taking place. Pictures were complete, not when no more could be added, but rather when no more needed to be removed.

This new direction has allowed for a far more visceral approach giving the materials greater expression, unencumbered by representation. Different tools such as large spatulas, knives and lengths of wood were used to introduce the elements of risk, chance and opportunity. Each painting becomes unique in the artist’s search for the unexpected.

With a more restrained economy of means, the paintings are less about finish as about the process - a process of not knowing, one that may reveal something you weren’t looking for. The picture finds itself in the mysterious and compelling process of being painted.

The Gateway of India has been a silent witness to many important moments of history. It is the backdrop to the unfolding daily events of the many gathered there. As evening approaches and the red sun dips into the Indian Ocean, the surrounding area takes on an almost carnival atomosphere. Musicians and hawkers vie for the attention of the throngs of tourists, as young couples wander under the watchful eye of elderly chaperones.

The whole of life plays out in this arena, each and every day adding its small mark to the layers of history and time.

Born in Sussex in 1966, Marcus Hodge gained a degree in Economics from London University in 1988.  In 1989 he moved to Spain to undertake a rigorous, five year training in classical oil painting at one of the few remaining establishments in Europe that taught the traditional techniques of Proportion, Claroscuro, Still Life and Portraiture. He studied at the Escuela Libre Del Mediterraneo in Palma, under the tuition of the late Joaquin Torrents Llado, one of Spain’s top contemporary portrait and landscape artists.  On completing his training, he became the third person in the school’s 25 year history to be invited to remain as a tutor. He has since become, “one of the most successful portrait artists of his generation,” (William Packer, Art Critic for the Financial Times.)

In 1996, Marcus returned to Britain and lives in a village near Oxford. Within a year he had exhibited with Royal Society of Portrait Painters. His first trip to India in 2001 inspired his first solo exhibition, a mixture of landscapes of India and of portraits, which was shown by Fine Art Commissions in Cork Street, London.  This was followed by five more shows with FAC between 2002-2011.   His next solo show will be with the Rountree Tryon in London in 2017.

In the last few years Marcus’ numerous commissions have included a large pair of paintings for the King’s Troop, Royal Horse Artillery, to commemorate their 60th Anniversary parade in Hyde Park; the President of the Union Club in New York; The Scots Guards at Balmoral; The Jockey Club in Newmarket; the Vice Chancellors of Bournemouth University; Lord Tebbit for the Nuffield Orthopaedic Hospital; Lord Gill; Lord Justice Ryder for Bolton University.