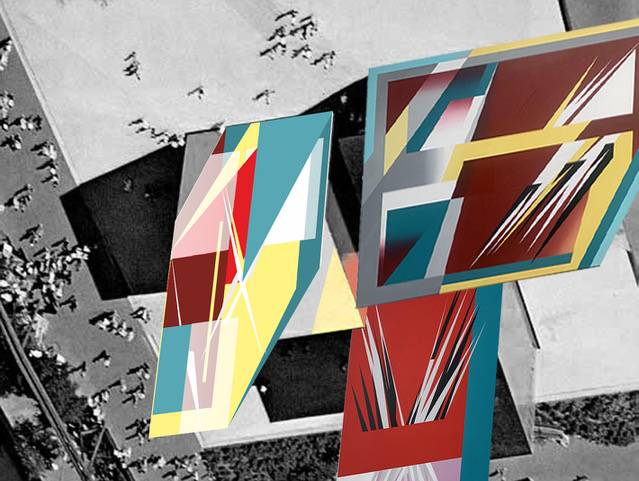 In this exhibition, Gili draws on designs and geometric motifs made by the artist across the last two decades of his practice in order to investigate the repeated elements which appear throughout his artistic development, now realised in bold colour.

The exhibition and title also reference the ‘looping narratives’ behind the artist and his country’s shared histories. Gili’s father, whose diaries from the 1960s were central to the development of the exhibition, fled Francoist Spain to settle in Venezuela in 1968. In 1996, Jaime Gili returned across the Atlantic to settle in London. Today, approximately 6 million other Venezuelans have emigrated from the nation which once offered so much hope to immigrants.

Among the many influences for Gili in this exhibition, the 1968 public project Imagen de Caracas is of considerable importance. Funded by the local authorities to celebrate the 400th anniversary of Caracas as a city, the event coincided with Gili’s father’s arrival in Venezuela. Although the project was cut short by displeased authorities, the efforts by the team of artists — led by painter Jacobo Borges — to document the history of Caracas across film, script, music and performance in a purpose-built pavilion, represents an important moment in the history of Venezuela’s artistic past.

In response to this critical moment in Venezuelan art history, Gili has created an installation of four canvases, which will hang suspended in an irregular cubed shape, leaving the walls of the gallery blank. The hanging of the four canvases, as well as the coloured carpet, reference the display aesthetics of 20th century world fairs, especially some Venezuelan pavilions of the Sixties.

An opening reception with the artist will take place on Thursday, 17 February, 2022 from 5-8pm at Cecilia Brunson Projects.

On Friday, 25 February, Jaime Gili will also host an audio-visual presentation entitled Loop Pavilion. This limited capacity experiential event will be presented in two time slots, at 6pm and at 7.30pm, and for which RSVP will be required. Please email Cecilia Brunson Projects at assistant@ceciliabrunsonprojects.com if you would like to attend.

Loop Pavilion will present both archival and new content edited by Jaime Gili, in collaboration with three generations of Venezuelan artists, including Jacobo Borges. In this presentation, Gili will mirror the variety of mediums present at Imagen de Caracas — music, speech and video — to explore the move away from the at-the-time popular styles of Kinetic art and geometric abstraction. This move contrasts with Gili’s conscious return to that tradition - a ‘return’ which here is tempered by an awareness of the different contexts which both Imagen de Caracas and abstract art now inhabit, fifty years later and on the other side of the Atlantic. In doing so, Loop becomes an important event in the afterlife of this key moment in art history.

A booklet with an essay by Adrian Locke, Chief Curator of the Royal Academy of Arts, will be published alongside the exhibition. This booklet will be launched during the Loop Pavilion performance on 25 February.

Jaime Gili has been living and working in the United Kingdom since 1996. In 1998, Gili obtained his MA from the Royal College of Art in London, and, in 2001, completed a PhD in Fine Arts at the University of Barcelona, Spain.

Gili belongs to a generation of Venezuelan artists who necessarily continue to examine the place of their practice within their inheritance of one of the most interesting Modernist movements in Latin America. In the 1950s, architects like Carlos Raúl Villanueva encouraged Venezuelan artists to redefine public space by integrating modern architecture and visual arts. The following generations of artists grew in the midst of this coalescence. In the words of Adrian Locke, Chief Curator of the Royal Academy of Arts in London, “Like Alejandro Otero (1921-1990), Carlos Cruz-Diez (1923- 2019) and César Paternosto (b.1931) before him, Gili responds to the space in which he places his work. The surrounding architecture, whether internal and external, is a fundamental consideration.”

Gili has developed a unique style that represents a highly distinctive point of convergence between a specific inherited European modernism interlaced with Venezuela’s past historical modernism, and the current affairs. Aware that abstract painting cannot place current reality as such on to the canvas - for instance, the reality of protests and the disintegration of democracy - Gili takes on these issues through their tempo and the painting’s own slow process of becoming. Thus, gradually — and looking within its own limitations, Gili’s abstract paintings attempt to bridge the voids of time and space, the final message being one of a positive future.

Founded in 2013, Cecilia Brunson Projects (CBP) is based in Bermondsey, London. The gallery exclusively specialises in historical and contemporary Latin American art. CBP’s objective is to provide a European platform that champions and celebrates Latin American artists —including those living and working abroad – through a yearly exhibition programme at its central location near Bermondsey Street. Active on both the primary and secondary market, CBP has established a reputation for introducing London audiences to some of the major figures of Modern and Contemporary Latin American art, including Alfredo Volpi, Coco Fusco, Waltercio Caldas and Willys de Castro. Additionally, the gallery is dedicated to preserving and supporting artist estates, including Victor Magariños D. and Feliciano Centurión. Through having been the Associate Curator of Latin American Art at the Blanton Museum in Austin, Texas, and the Latin American Correspondent for Artforum, Cecilia acts as a consultant to major museums and public institutions and advises private and corporate collections.