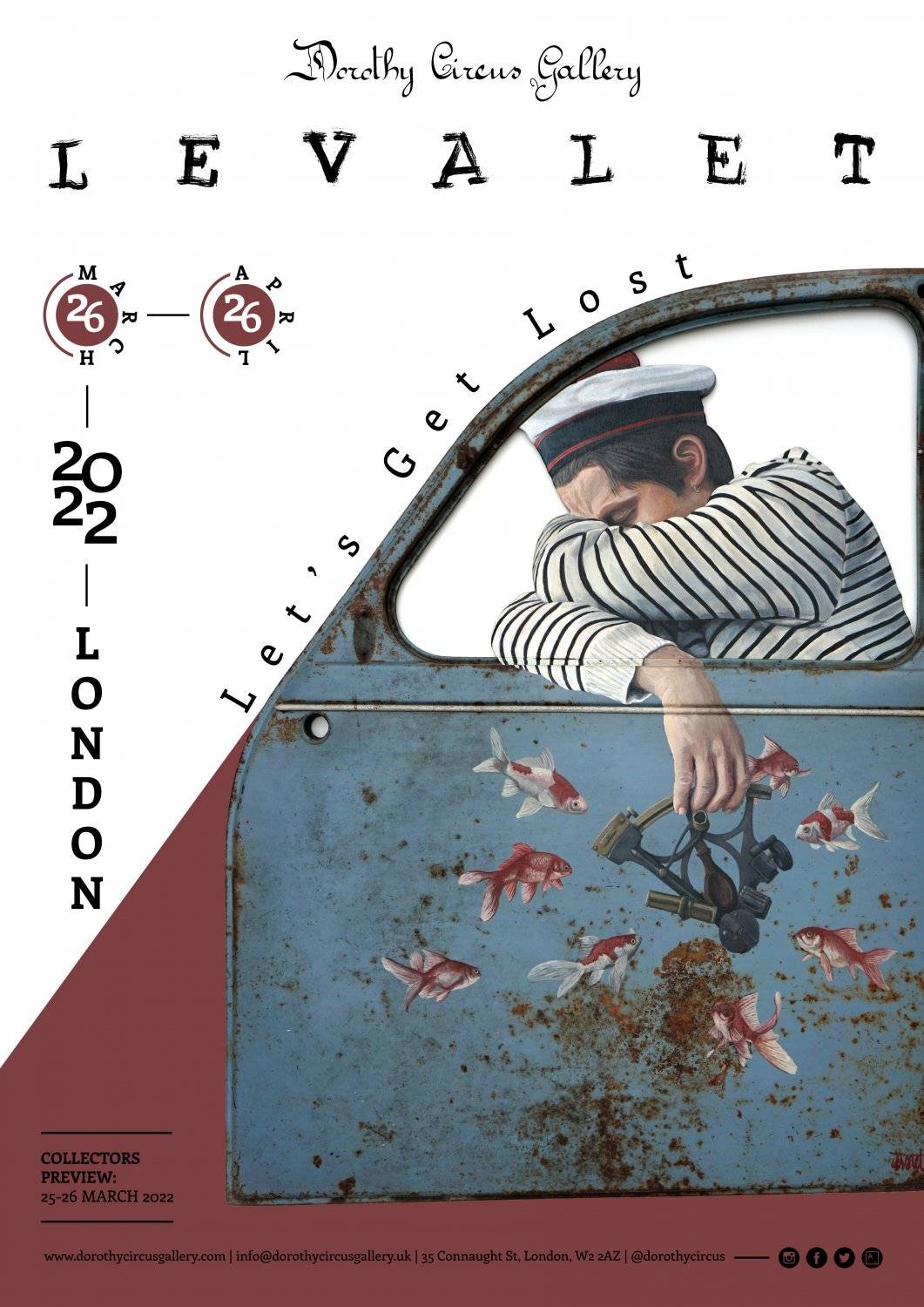 The excellence and coherency of LeValet's street art

For those of you who follow the Gallery and the curatorial research carried out since 2007, it will be easy to trace the path that street art has made in parallel with the explosion on the global market of artistic codes rich in surrealist symbolism and characterised by return and triumph of the figure art.

The imagination and its visual transposition reign as absolute leaders over the production of contemporary art of the 21st century. In an osmotic exchange, they communicate the trends that are most easily rooted in the hearts of the spectators. From the acclaimed street art to the Asian pop cartoon to the infamous pop Surrealism, everything goes under/around the common denominator, which is the boundlessly of the imagination.

The absolute protagonist of the new generation of artists, the imagination has bravely freed itself from the diktats of critical lobbies. Instead, it infects/affects the artist's form and spirit of his work and the viewer/user.

There is no shortage of copycats on the international scene. Still, at DCG, we only give space to those who have really ventured into authentic research that, if on the one hand bears on the skin the signs of the formative artistic genre, just as much as the tattoos of a social and cultural background which most influenced and inspired his work, on the other it never fails to put his contribution, digging into a subjective emotionality and at the same time facing a personal technical revolution that makes the works come to us unique and never seen before.

It is then with extreme pleasure that today we bring to the stage one of the artists who made us most proud, not only with his artistic evolution but with the new body of works he presents in his first solo show in London entitled Let's get lost.

Charles Leval, aka Levalet, is a French street artist, son of the old school of Black le Rat and Jeff Aerosol, who, by pasting his life-size inks, developed his street painting towards a genuine and intimate approach.

Masked by an ordinary guy with the typical French sailor top, he pops out like "any" and page after page, wall after wall, always site-specific, reveals the artist's most sincere adventures.

Young and already the father of three children, Levalet is the boy with the striped shirt, whom you can also call Ulysses, or Nobody leaving him without a name, or call him with your or your son's name because that boy who shyly hides his face under the hat is what it is. Equally, what it wants to become, is what it fears to be and at the same time what it seeks and what it finds, in itself and others.

The actuality of the psychological analysis, the poetics of narrative research and the irony that accompanies it combined with the pictorial excellence, the elegance and balance of colour, and again the use of materials consistent with the origins of the movement of the street, are just some of the elements that make this artist one of the most representative messengers of a contemporary collective sentiment.

The ten new works of "Let's get lost", accompanied by six drawings on paper, are still images of our passage in this life represented through car doors. The metropolitan narrative unfolds faithfully in examining the absurdity and paradoxes of human existence, aware/inclusive of the frustration and sense of inadequacy that reflects a struggling yet happy humanity.

As humans, with one foot in the future and one in the past, we aim to leave a mark whenever we can: against the rusty surface of time, with the deep desire to be found in a diapositive, our name on the bark of a tree, or maybe one day to be looked at for a long time by visitors in a museum that has collected the works of Levalet.

Other events from Dorothy Circus Gallery