IN THE KINGDOM OF THIS WORLD 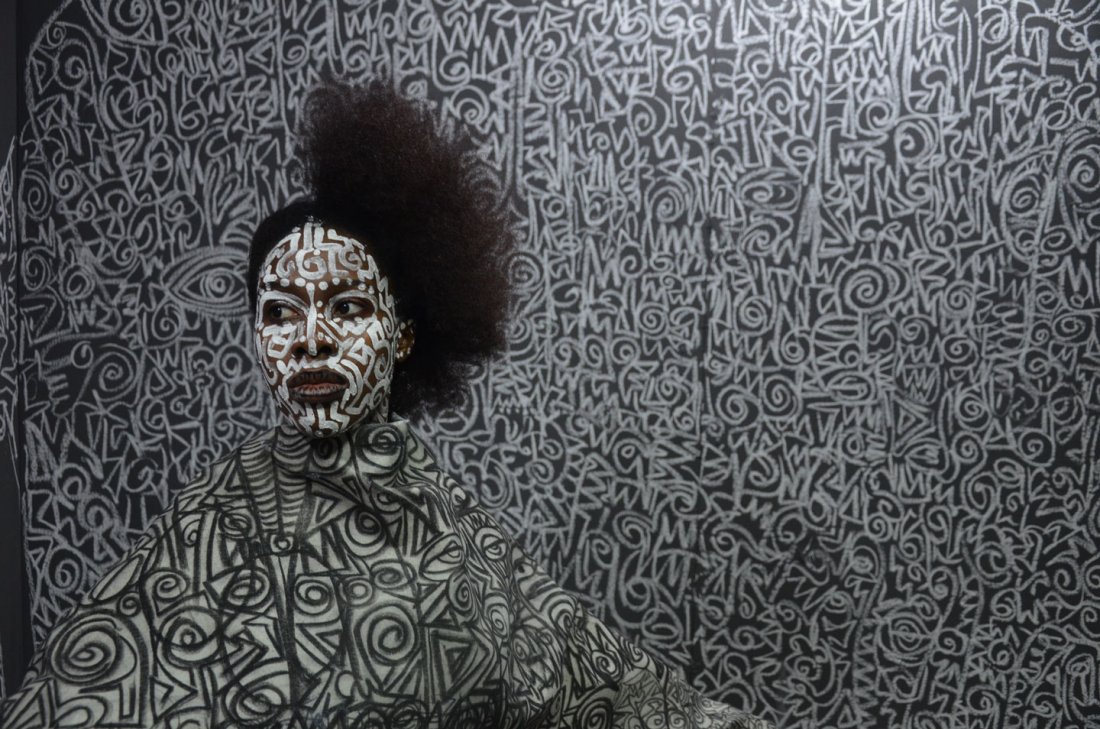 Tyburn Gallery is pleased to present In the Kingdom of this World, a solo exhibition by Victor Ehikhamenor. Hailing from Edo State, the historic seat of the Benin Empire, Ehikhamenor is a multi-disciplinary artist whose signature patterning, a mélange of gestural abstraction and stylised forms, adorns everything from paintings to photographs to immersive installations, producing a hypnotic experience, a sense of both meditative repetition and an ongoing narrative being told.

For this exhibition, Ehikhamenor expands on his work at this year’s Venice Biennale by exploring the material form of identity and the intricate connections between history, spirituality and art. In a series of intricate perforated works on paper and a new body of work composed of rosaries sewn on canvases and lace material, the artist weaves elaborate images depicting mythical and royal figures. These works reference the imagery and symbolism of both Edo traditional religion and Catholicism, the dual aesthetic and spiritual traditions which infused the artist’s upbringing.

The exhibition draws its title from a work of historical fiction by Cuban novelist Alejo Carpentier, who suggested that “man finds his greatness, his fullest measure, only in The Kingdom of This World.” The novel uses Carpentier’s distinctive mode of “marvellous realism” to explore colonial and post-colonial history through the prism of different cultural perspectives, challenging the boundary between reality and narrative. Ehikhamenor’s new work considers themes of colonial and religious hierarchies and the interaction of people, palace and society across the intersecting histories of the Benin Kingdom and the British Empire. As in Carpentier’s novel, the official history and its supposed reality is subverted by the outlandish and the surreal.

In his new work, Ehikhamenor thinks critically about his descent from the Benin Empire, whose sophisticated political culture and artistic tradition has inspired a renewed appreciation of pre-colonial African civilisations. And yet, the mythical nature of all empires makes it possible for the fictional to exist concurrently with the rational, the magical with the realist. Examining the narratives of inferiority used by the British to coerce the Edo people into adopting ideals of Euro-Christian civilization, Ehikhamenor, born after independence, considers the complex relationship between the traditional and the modern.

Ehikhamenor was born in Udomi-Uwessan, Edo State, Nigeria in 1970 and lives and works between Lagos, Nigeria and Maryland, USA.

Since gaining his Bachelor of Arts in English and Literature from Ambrose Alli University, Nigeria, in 1991, he has been awarded two Masters degrees from the University of Maryland, USA, in Technology Management (2003) and an MFA (2008). He has received numerous awards for both his writing and art, as well as fellowships from organisations such as the Rockefeller Foundation (USA, 2016), the Nirox Foundation (South Africa, 2016) and the Norman Mailer Centre (USA, 2014).

In 2017, he was one of three artists chosen to exhibit as part of the first Nigerian Pavilion at the 57th Venice Biennale. His work has also been included in numerous group exhibitions and other biennales, including the 5th Mediations Biennale in Poznan, Poland (2016), the 12th Dak’art Biennale in Dakar, Senegal (2016), Biennale Jogja XIII, Indonesia (2015), as well as being shown at the 56th Venice Biennale as part of the German Pavilion (2015).