Jonathan St. Void: 'The Return of your Imaginary friend in High Resolution’ 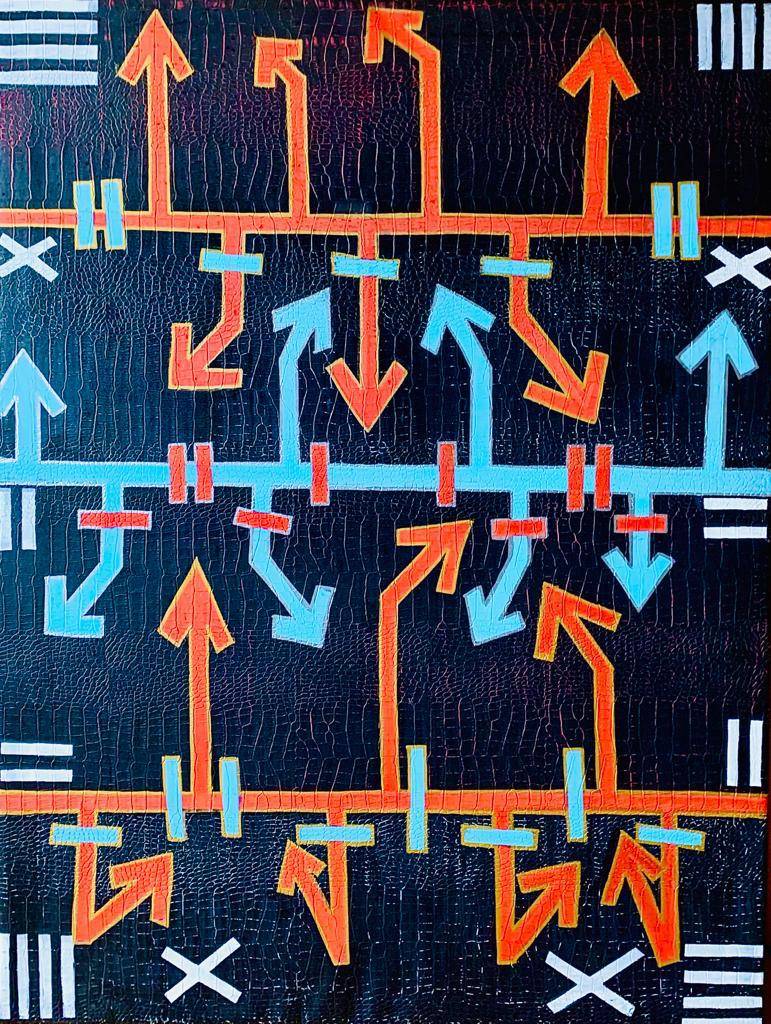 A solo exhibition of the elusive artist Jonathan St. Void titled ‘The Return of your Imaginary friend in High Resolution’, will be presented by Varvara Roza Galleries at the Punkristocracy Pop-Up gallery on Portobello Road from 15th to 30thApril.

Jonathan St. Void is one of the art world’s best kept secrets, a very private artist with an inherent aesthetic that effortlessly straddles the fine line between punk rage and regal grace while operating in a realm of revolutionary creative sensibilities. His new solo exhibition at the Punkristocracy Pop-Up, presented by Varvara Roza Galleries and The Blender Gallery, is his first since the Covid-19 pandemic, featuring new artworks that evoke expansiveness and escapism.

Punkristocracy is the brand created by the artist under which he creates paintings, jewellery and NFTs.  St. Void is heavily influenced by the punk movement of the 1970s in New York and London, which he feels is the most explosive creative era of the 20th Century. He explains: ‘I’ve always been into good manners and presenting yourself well, and nobility above Royalty. Because aristocracy is a way to behave, not just something you inherit through a bloodline. So I was thinking about the whole aesthetic of my creative output to be a combination of the punk aesthetic and the aristocratic aesthetic, and I created ‘Punkristocracy’.”

St. Void has moved into NFT’s, and his Punkristocracy NFT artworks titled ‘They Came from the Dogstar’ will be revealed at the exhibition as the inaugural NFTs of The Blender Gallery’s new NFT platform.

‘The Return of your Imaginary friend in High Resolution’ will feature innovative, abstract artworks on vegan crocodile patent leather, and paintings from a series called ‘Prime Ordeal’ which explores the more physical nature of man, the skin and bones, with influences of the primordial style of Francis Bacon’s crucifixions and Pope paintings combined with a Pop Art Keith Haring aesthetic.

Jonathan has worked for 19 years on a diverse range of surfaces such as canvas, wood and plexiglass. Most recently, in his exploration of structured abstraction, he has been using layers of oil and acrylic based markers to draw spontaneous but intricate linear designs on vegan crocodile patent leather with no measurements taken beforehand and a complete absence of planning or intent. Through this method he created his latest series of pieces titled "The Illusion of Explanatory Depth", evoking esoteric, archetypal imagery in a visually linguistic style that can best be described as primitive graffiti.

Jonathan St. Void commented: “This show is a mini-retrospective of selected pieces from several previous series of artworks through the years, along with a sneak peek at the future, with my upcoming series of digital animated collages both in physical and NFT form. The title of the show - ‘The return of your imaginary friend in high resolution’ - alludes to many things, including getting back in the game after a long hiatus, rejuvenated rather than defeated, as well as a cheeky reference to the audience’s tendency of projecting characteristics, traits, intentions and backstories upon creative figures, making a pastiche of who they want you to be... and I’m happy to be exactly that for every single one of them.”

Varvara Roza says: “Jonathan St. Void is a very private and elusive character. His work is like nothing I’ve ever seen before, and the diverse range of his creative oeuvre, from visceral, melancholic pop art to his WW2 weaponry blueprints with integrated 1940’s cartoon characters and his intuitive abstract art on vegan crocodile patent leather, through to his esoteric digital NFT pieces combine to create a unique and eclectic output. I’ve always wanted to collaborate with him, and am very happy we hit it off so wonderfully! One thing is for sure. We’re going to have a lot of fun!”

Throughout his career, beginning in 2001, Jonathan has collaborated with the London based 'Sakai' pop-up Gallery on group and solo shows. He has exhibited at 'Kunsthaus Tacheles' in Berlin and notably collaborated with 'Vogue' and 'Sotris Boutique' in Athens in a unique solo show for ‘Fashion’s Night Out’ in Kolonaki. Other exhibitions include; Aggelos Gallery; 48 Gallery; Artion Gallery Group and The Breeder Gallery. Jonathan has had mini retrospectives of his work at Hoxton Gallery and Spiral Gallery in Mykonos, and also had the honour of being ‘Artist in Residence’ at the iconic Poseidonion Grand Hotel in Spetses, Greece.

Jonathan St. Void is a classically trained artist who studied Fine Art at the Kent Institute of Art & Design (KIAD) in England, and went on to live in London, where he is currently based.  He has had artistic residencies in Amsterdam, Berlin, Athens and Mykonos. St. Void transcended the creative norms by developing his own technique called ‘Layered Markers’ and utilizing innovative surfaces. He manifests visually evocative pieces that tread a fine line between brutality and childlike innocence. His influences span across a diverse range of masters and one can detect in his oeuvre equal doses of rawness, structure, street spirit, playfulness and a colour palette that’s simultaneously joyous and contemplative.

At this point in his creative trajectory, Jonathan maintains a very selective and subtle exposure of his name and work, limiting it to word of mouth between those who meet him personally or happen to view one or more examples of his pieces through a mutual acquaintance or "invitation only" gallery show.

Having bookended his journey into the abstraction, he is currently preparing his next solo exhibition “They Came From The Dogstar’, based on his short, self-penned space age fairytale: a 25-piece series of digital collages, presented in a personally customized and evolved ‘Light Box’ form, as well as video projection.

Additionally, St. Void is putting the finishing touches on a large-scale art installation by government cultural commission, in collaboration with the seaside municipality of Vouliagmeni in Athens, Greece.

Varvara Roza and Jason Theophanidis view London as one of the most important centres of the contemporary art world, and a global hub for fine art, which is the motivation behind showcasing a carefully curated selection of the most interesting Greek contemporary artists in London.

For more information about the exhibition go to: https://varvararozagalleries.com

Other events from Lee Sharrock