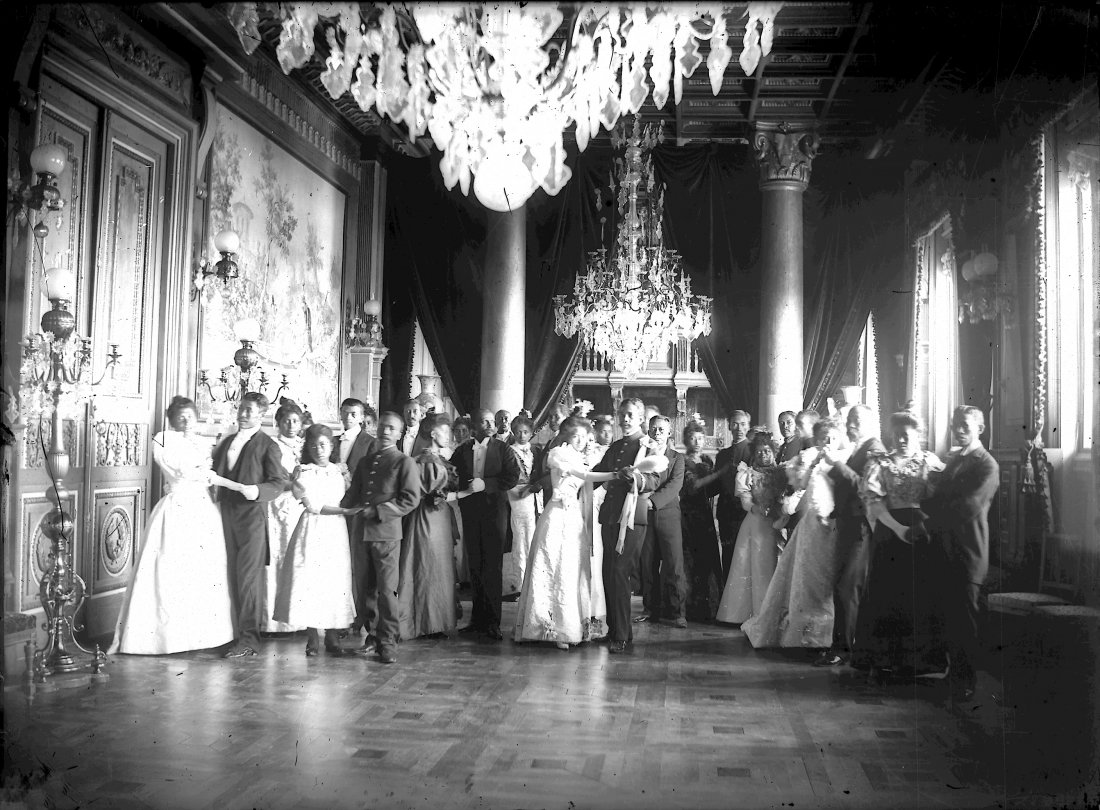 Tyburn Gallery is pleased to present an exhibition of new work by Joël Andrianomearisoa.

Andrianomearisoa was born in Madagascar and lives and works between Antananarivo (Madagascar), Paris (France), and Magnat-l’Etrange (France). The artist, originally qualified as an architect, retains a strong interest in design and architecture, sculpture and performance and elements of these disciplines – tactility, structure, geometry and temporality – inform his work.

For Andrianomearisoa, paper and textiles are recurrent elements: he creates from these materials a polyphony as they are split, folded, creased and woven. From the start, black has been the cornerstone of his practice, though far from being monochromatic, black represents one and a myriad of colours: “It is not only a colour but also an attitude that does not exclude the rest. It aims towards the universal”.

The starting point of Last Year in Antananarivo is a series of photographs of a ball held by the French colonials in 1900 in Antananarivo which Andrianomearisoa found in FTM archives in Madagascar. This discovery set the artist on a journey, exploring the relationship between memory, pain and identity. In the images the Malagasy are dressed by the French in elaborate costumes to reflect the colonialists’ idea of a ‘civilised’ people. Andrianomearisoa plays on the inherent duality – the colonized and the colonizer, the past versus the present, pain and pleasure, the subjectivity of identity and the notion of ‘civilisation’. This is the first time Andrianomearisoa reflects directly on his Madagascan heritage.

At the same time, the title of the exhibition, inspired by the French film Last Year in Marienbad by Alain Resnais, arises from the artist’s life and work in Paris. The aesthetic of the film, the timelessness and absence of any sense of temporality, inspires Andrianomearisoa. There is no real story, no definitive end and no answer to the questions posed. Instead the questions simply raise a further enquiry – leading to an ongoing dialogue about memory and meaning.

This echoes Andrianomearisoa’s approach – the images which inspired the exhibition are poignant, haunting, invoking a sense of loss and moral outrage, yet the artist refuses to draw any conclusion or offer us any solution. Instead he distorts the images by cutting them into segments, inviting observers to reach their own conclusions and create their own stories. The idea of dialogue is fundamental – there are overlapping yet segmented memories, no moral certainty, no definitive truth – instead Andrianomearisoa explores the duality of meaning and insists on the primacy of emotion. Andrianomearisoa juxtaposes the ball of 1900 with an event in 1960 to question: Is love an impossible dream? It is possible for human beings to be truly united?

Last Year in Antananarivo represents a new departure for Andrianomearisoa in that he explores colour for the first time; works on canvas made from found black fabric and Saris from Jodhpur in which the textiles are transformed to have an architectural density that recalls the thick brush stokes of an oil painting. These paintings introduce a dichotomy: What is black? What is colour? What is dark? What is light? The different hues overlap, blend and contrast, creating a fluid enquiry into the notions of fantasy and reality, emotion and truth; the varied textures and colours invoking a multitude of meanings and emotions.

Alongside the paintings and fragmented images, there are close to a 100 paper objects, not reproductions, but shaped from the memory of the objects they depict. The objects arise from imprints of articles commonly found at balls, rendered in black paper to assume ghostlike forms; burnt memories steeped in a deep melancholy.

The catalogue of Last Year in Antananarivo, a series of postcards, creates another window on the exhibition - that of a never ending project in which the artist invited friends to respond to the photographs which inspired the exhibition. For Andrianomearisoa each element has the power to invoke a thousand narratives and interpretations.

Joël Andrianomearisoa was born in 1977 and originally studied at the Institut Métiers Arts Plastiques in Antananarivo. He obtained a diploma degree in architecture from École Spéciale d’Architecture, Paris, France in 2003.

Andrianomearisoa presented a solo project, La Maison Sentimentale, at Dak’Art Biennale 2016 in Senegal, as well as showing work as part of the special project Tu M’Aimes at Rencontres de Bamako 2015. His work has been shown at the Smithsonian Institute, Washington DC, USA (2015), the Grand Palais, Paris, France (2013), and the Centre Culturel Albert Camus in Antananarivo (2008), as well as at biennales all over the world. His work work has been showcased in solo exhibitions in Paris, Berlin, Brussels, Madrid, London, Johannesburg and Istanbul.