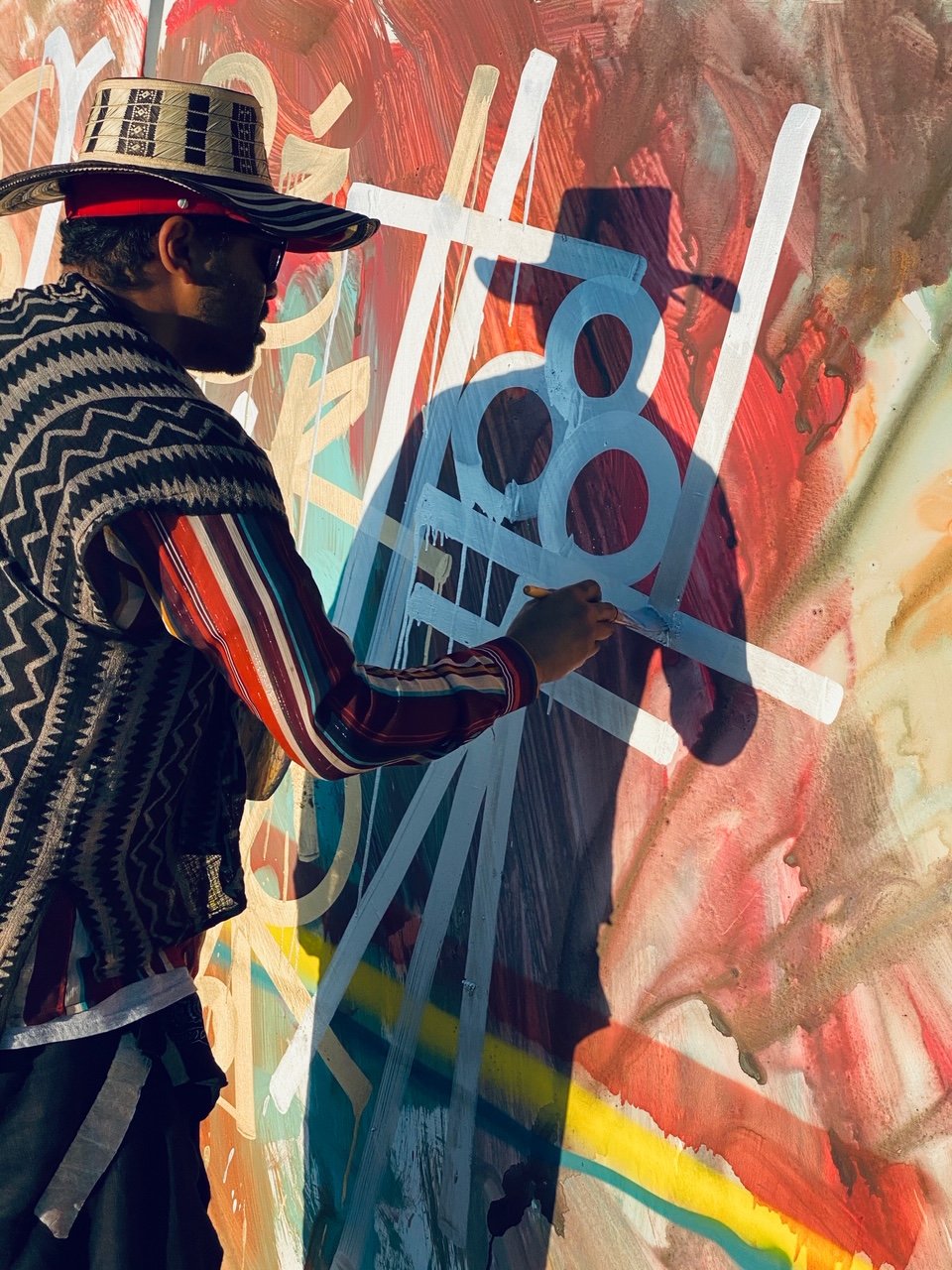 RETNA (Marquis Lewis), the internationally renowned street artist whose signature hieroglyphics are highly coveted by collectors on both sides of the Atlantic, will be unveiling new and never-before-seen works in an exhibition titled ‘Valle de Guadalupe’ this December (8 – 31) at HOFA Gallery, London.  The press preview will take place on 7 December, followed by an official opening to the public on 8 December both in gallery and virtually.

This new body of works are the last RETNA will create in 2020 and his first show after a creative retreat in Valle de Guadalupe, Mexico, where these new works were conceived and created. These soon-to-be-released paintings vary in size, including three diptychs, and they showcase RETNA's signature style infused with rejuvenated vigour, calligraphic flare and heightened precision arising from the artist's renewed creative clarity. With fiery red, terracotta and brown backgrounds and scripts written in gleaming gold and dusted paints, the paintings draw richly from the ambience and warmth of Mexico.

Born and raised in Los Angeles, California, RETNA is known to be one of the world's most popular graffiti artists whose work and fame has successfully encompassed the worlds of contemporary art and popular culture. He accesses spaces between text-based imagery and abstract, emotive states with his mysterious lines of verse. Drawing from Egyptian, Hebrew, Roman and Arabic calligraphy, RETNA created the unique script through which he has consistently expressed his emotions and experiences in totemic symbologies which, though masked in ciphers, pay homage to the shared and unifying elements of human existence over the course of his artistic career.

For this artist, music is both an inspiration and an inextricable part of his art. His name, RETNA, is inspired by a line from a hit song by the popular 90s hip hop group, Wu-Tang Clan, and his intriguing hieroglyphic paintings are often created to a soundtrack drawn from his wide and eclectic musical tastes. Indeed, his works are often accompanied by ambient or musical sounds, creating a multisensory artistic experience that leads fans to connect deeply with his art. It is no surprise that this prolific artist has collaborated with quite a few musical artists. RETNA’s instantly recognisable abstract visual linguistic style is rooted in a deep fascination and appreciation for art, culture, written language, and music. As the artist himself said during an interview with the Museum of Contemporary Art, "…we're…all one people. We just all grew up in different places..."

The upcoming RETNA show will run alongside 'American Roots', the 2nd in a new series of exhibitions titled CURATED by PAVE Contemporary which features the portfolios of select global art collectors.  ‘American Roots’ is curated by collector Francesco Bena and will début on 10 December and run until 24 December.

HOFA Gallery founder Elio D’Anna says about the forthcoming exhibition, “HOFA is honoured to be exhibiting RETNA’s last body of new works in 2020. He has again achieved a striking harmony of cultural and artistic influences in these latest and exclusive works, his new works feature crisp lines and elegant geometric forms that are bristling with new invigorated passion and meaning.”

D’Anna adds “Both RETNA’s show and America Roots share a focus on the diversity of American culture, drawing from North American, Native American, and South American artistic influences, and fittingly, both shows will be seen side-by-side in HOFA's gallery, Mayfair, and virtually this December.”

In compliance with Covid-19 safety protocols, all visits to the gallery will be strictly on RSVP basis.

Other events from HOFA Gallery