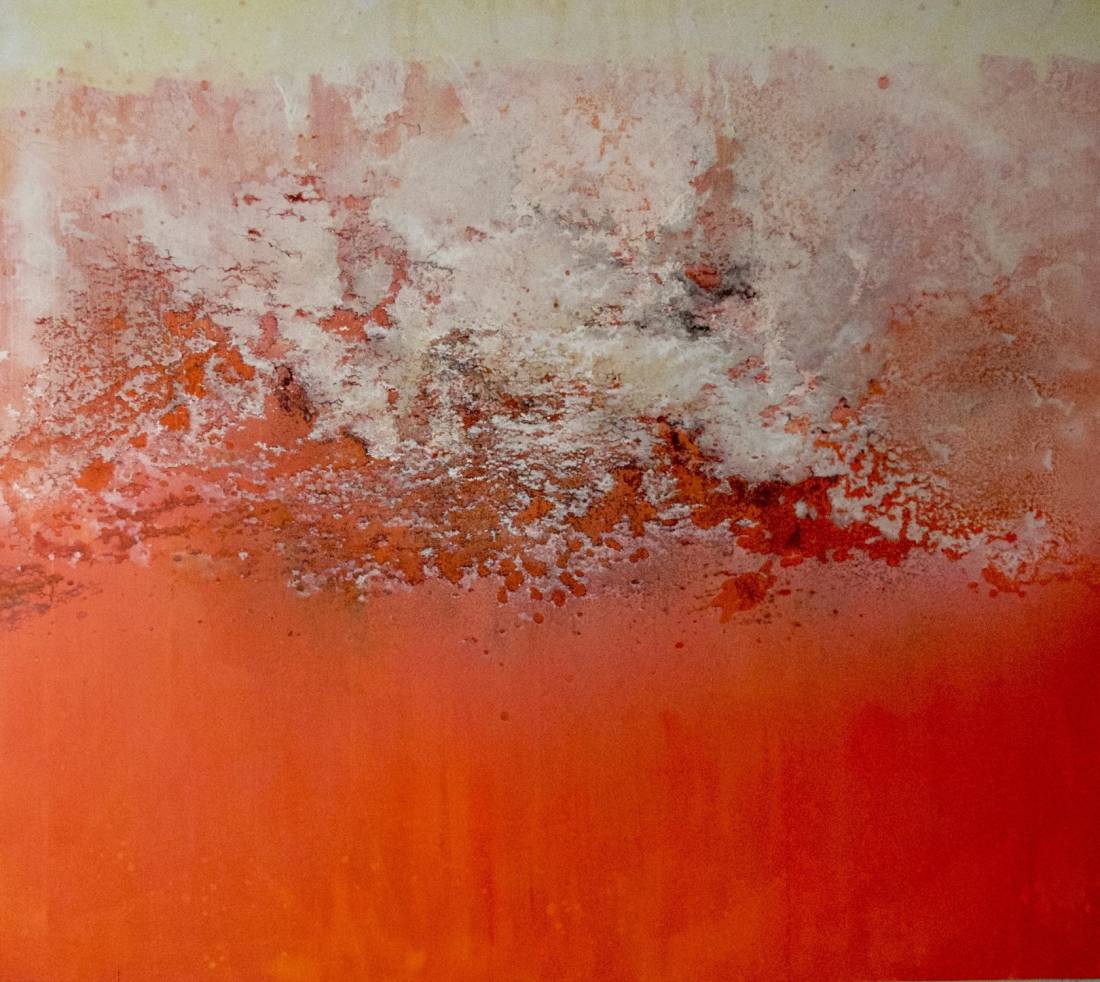 Expanding Horizons will be held at October Gallery and will pay homage to writer, curator and art historian Pamela Kember, who ardently championed Asian art in the U.K. and further afield.

A body of new works by Govinda Sah ‘Azad’ will be included in this exhibition. In his paintings Sah effortlessly balances traditional eastern metaphysical insights about the nature of reality with visual realisations that are in accord with the latest formulations of contemporary western science. He imagines a cosmos of boundless possibilities. A painter of tempestuous skies and cosmic explosions as well as an avid admirer of J. M. W. Turner, Sah followed in the footsteps of the Romanticist, and now lives and works in Margate.

Tian Wei is renowned for his striking monochromatic canvases in bold colours that explore the written word and the plasticity of meaning. Words and quotations in minute script fill the backdrop of Tian’s paintings, forming a patterned ground on which larger semi-abstract shapes are drawn. The cursive lines spell out simple English words, such as ‘soul’ and ‘red.’ These selected English adjectives and nouns represented in Chinese calligraphic style give the viewer insight into the artist’s lived experience of an emerging synergy between eastern and western sensibilities.

Jukhee Kwon creates works from the printed page quite literally; using abandoned and disused books, she shreds the pages by hand to create magnificent ‘book sculptures’. The sculptures brim with energy, often flowing out of books in the form of cascading waterfalls. Each book, while destroyed, claims a new life and existence through creation.

As Head of Arts and Learning at Asia House Pamela Kember was instrumental in collaborations between Asia House and October Gallery. Several of Jukhee Kwon’s works were installed at Asia House in collaboration with Kember this included The Book of Galileo (2014) which was created by the artist for the 2014 edition of Asia House Bagri Foundation Literature Festival.

Kenji Yoshida’s monumental works consist of ethereal gold, silver and precious metals on canvas which unite a restrained tradition of Japanese applique work with that of an abstract modernist aesthetic. In 1964, Yoshida moved to Paris, the acknowledged centre of Modernism. This move brought Yoshida’s work into contact with the great artistic movements of the time. He was confronted by the heady shock of the Abstract Expressionists, in particular Rothko and Motherwell, who both employ similarly abstract forms in striving for the transcendent spirituality that characterises Yoshida’s art.

In 1993, Kenji Yoshida became the first living artist ever to be given a solo exhibition at the Japanese Galleries of the British Museum, London, UK. October Gallery has presented regular exhibitions of Yoshida’s work since the late 1980s.