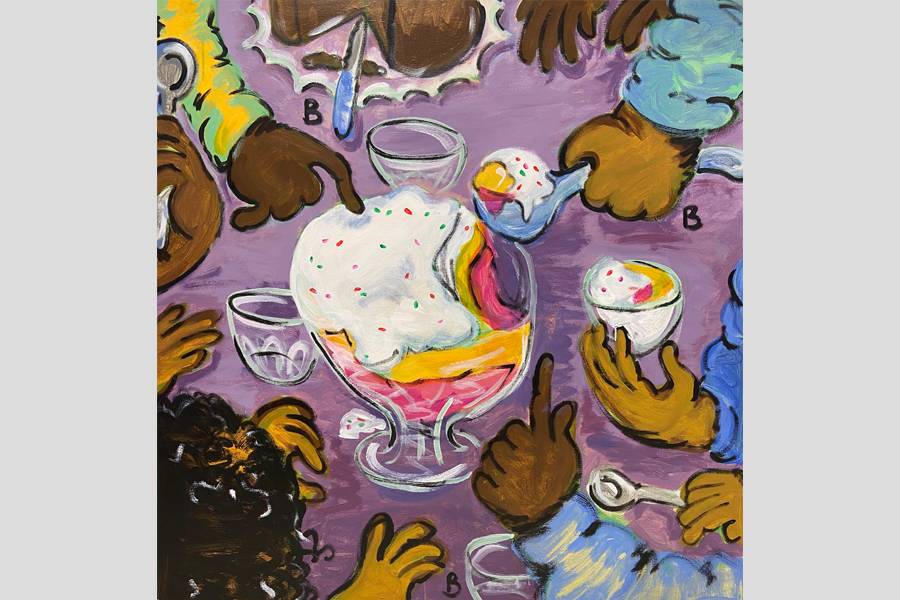 Olivia Sterling’s (b. 1996, Peterborough) new body of work, commissioned by the CCA as part of the Episodes programme, focuses on colour-changing bodies through tanning or fake tan, on the stage of the bacchanalian British package holiday. The former transforms white bodies into a desired category of beauty, one that paradoxically runs contra to entrenched racial prejudices against darker skin tones. Figures rub food into their skins, lounge scantily clad at the poolside, the palette of colours accentuating pink skin, red sunburn, and messy traces of exuberant consumption.

Sterling’s graphic paintings and prints zone in on racist micro and macro-aggressions perpetuated on a daily basis in the UK, through slap-stick, absurdity, and the language of cartoons. Brightly saturated canvases depict abstracted limbs. Their interaction is variously violent and ambiguous, passing food, sticky liquids, and coded objects, or attacking each other, in actions that are the product of a systemic language of shame, exclusion, and cultural ownership. These are surrounded by letters that refer to the inane colour coding inherent to racialised discourse; the letter ‘W’ sits next to a white figures arm, and ‘B’ or ‘Br’ hover by a black limb.

Totems of British culture, such as milk bottles or brown sauce, appear as familiar touch points for the artist’s own relationship to her Black Britishness. Influenced by eighteenth century political cartoons in which the body is distorted into grotesque forms that are encoded with the societal values of the day, Sterling has developed a bold and confronting visual style that moves through dark humour to examine tropes of race and body image in the UK now.