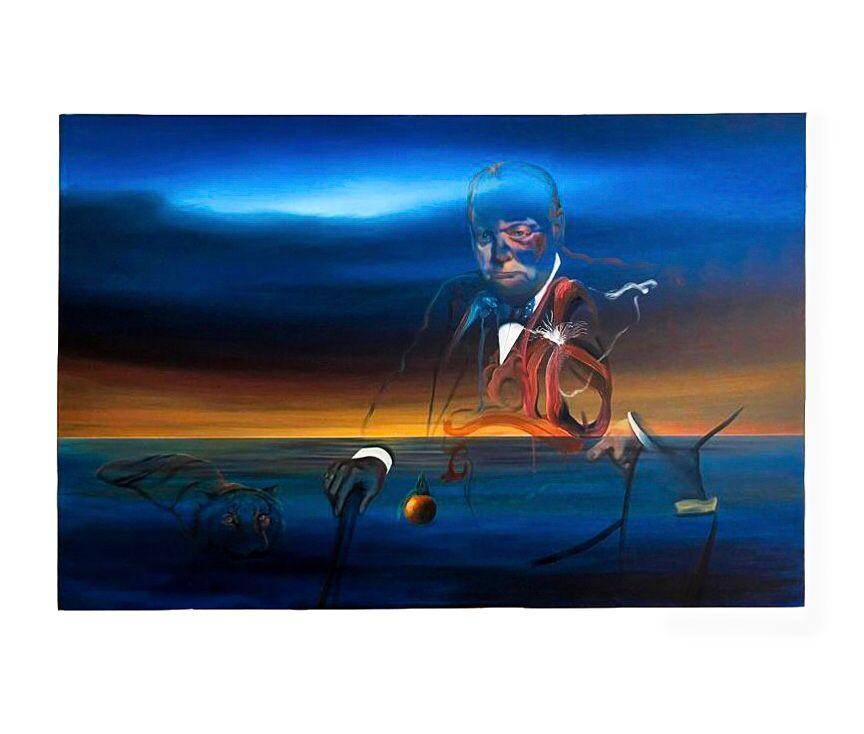 Devine is renowned for his politically and socially relevant pieces in what he calls his Neo-Dimensionalism style – often including historical figures rendered to visually represent the inexplicable, invisible and subconscious, using symbols and surrealism. Hailed by those around him as having arrived at the ‘pinnacle of his career so far’, ELLIPSIS will feature two Neo-Dimensionism portraits of two prominent British leaders – Sir Winston Churchill and Her Majesty Queen Elizabeth II. Devine is the first to comment that this is perhaps an odd choice for an Irishman, but he found through studying their lives and characters in microscopic detail, that he unearthed a deep empathy for them and their loves and losses. Each time he came to the canvas he felt as though he were sitting down for a chat. The result is two profound portraits, masterfully executed to engage the viewer’s fascination and understanding of the subjects through subconscious undertones.

Alongside these two eminent characters he will also be unveiling an impressive triptych which feeds on the story of Adam, Eve, and the Garden of Eden, which he regards as his most personal artwork to date.

Devine is from County Offaly in Ireland, and has been making art all his life, but it was towards the end of his undergraduate degree in visual communications that he rediscovered his love of painting. His medium of choice is acrylic on canvas. The quick drying nature of acrylics means that his signature use of creating haunting, ghostly layers to reveal hidden symbolism can be achieved. His portraiture has established itself in a new way since 2018 when he began to create a body of work reflecting on his love of the human anatomy and the unseen. He calls this work ‘Neo Dimensionism’. As he explains, “Neo Dimensionism uses the human anatomy, some not visible to the naked eye, to symbolically represent aspects of the human subject’s life.”

Devine investigates the subject, whether historical or living, in a forensic manner, attempting to understand their life and being, holistically. With living subjects the process is almost like therapy, and with the historical figures, he immerses himself in research to present the whole person from all angles. The resulting works are penetrating and thought provoking – by intentionally eluding the viewer’s understanding on a conscious plane he seeks to communicate on the subconscious level. The translucent subjects that emerge, are skeletal yet erudite and clear, conveying direct, unambiguous impressions of the personalities involved. He has often said that the process of painting allows him to connect to his subjects and commemorate feelings and memories which can continue their legacy.

Devine’s imagining of Sir Winston Churchill engages with him posthumously, using anatomy to represent some of his most well known, and less well known characteristics. For example the painting depicts Churchill’s shirt as a fountain pen that reaches into his heart that not only represents his reputation as a prolific writer but also his passion for politics. The inclusion of a lung in the chest represents his position as a staunch imperialist and pride as an Englishman, while the diaphragm pushing up his organs conveys his ability to give speeches with passion. The inclusion of a highly detailed orange represents his wife Clementine. Animals also make an appearance to tell Churchill’s story whether it is the inclusion of a Rottweiler dog to represent depression or an approaching tiger to highlight the Bengal famine, and Churchill’s controversial policies. Raw and aggressive the pieces set out to address history, encourage conversations about these characters, heal anger and find common ground.

These works are not just about retrieving the likenesses of the physical, but about uncovering a much deeper representation of the mind, soul, and memories of a person. With a rich colour palette of earthy, strong hues (deep blues, greens and dusty red), the works are grounded in truth, and it is indeed the whole truth that Devine seeks to represent. Unlike other artists who may favour audience interpretation, many of Devine’s works are accompanied by a detailed analysis of various symbols, carefully positioned on the canvas – as seen in the Churchill and Queen Elizabeth II portraits. However, the negative space and translucence of the secondary characters also leave much room for the viewer’s imagination and transference, inviting the viewer to project their own understanding and experience onto the work too. In fact, in his tryptic Adam Eve and the Garden of Eden, his most subjective piece which shows his love of the forms found in nature and the animal kingdom, the viewer is required to engage with the painting through their subjective experience too.

“Technically impressive, majestic in size and colour palette, and brimming with depth and intellect, Devine’s work needs no introduction – and yet all I can do is talk about it at length!” – Phoebe Minson, Creative Director, Reem Gallery.

Other events from Lucky 8 PR